Also in this port the arrival of the ships are staggered but the only problem is that it is not as easy as in Ketchikan where all the docks are in line with the open fairway called Tongass Narrows. The port of Juneau is basically a big pond, with only the option for smaller ships to go under the bridge and further up into Gastineau Channel. That bridge connects the town of Juneau with the town on Douglas on the West side of the channel. Further down there is the village of “Lucky Me” founded in 1986. I think this makes Alaska so special. This particular gentleman did not agree with the politics of Juneau and decided to pack up and settle down halfway down Gastineau Channel. Now after 25 years he has squatter rights, his house (if he is still there) has improved greatly and some other people have joined him. For somebody like me, who comes from a very well regulated country as the Netherlands is it is just mind boggling that you can do that. But there seems to be quite a few thousand people living in the Alaskan interior that are not accounted for, never missed and sometimes never heard of again. Somebody said it might be as many as 100,000 that simply” disappeared off the map” in this enormous territory but I cannot prove that.

With staggering arrival times not really possible, the Oosterdam had already docked and because it is bigger than us it gets the cruise terminal with the car ramp that follows the tide, so you do not have to adjust the gangway. We were allocated Alaska Steam Dock, named after the passenger liner company, Alaska Steam, that maintained for nearly a 100 years the connection from Seattle to the Alaskan ports in the lower panhandle. Later that service was taken over by the ferries of the “Alaskan Marine Highway” which are still there and who bring RV’s and back packers up the coast. Other traffic has been taken over by Alaska Air Lines. Thus, we being the little boat were allocated this dock which is great for the guests as you cannot get any closer to the town. If I would have gone another 10 feet forward during docking, I would have crushed the tender float. We squeezed the Statendam slowly into position and by the time we were docked, I had my 50 feet clearance to the Oosterdam. She arrived earlier making my life more difficult on arrival but she also departed earlier, making my life easier during the departure maneuver.

In the mean time we had our 50% of rain and all that 50% fell on the ship and downtown during the day. Only after 17.00 hrs the sky cleared and then it remained dry. The hotel manager and I spent some of the day going to Home Depot for spare parts. They opened one in Juneau last year and as soon as we see that we can get items cheaper locally, we are on the way. Our purchasing system is not that flexible when it comes to reflecting local discounts and/or best prices; when we need something and we can get it cheaper then we go for it. We are still Dutch and spending one cent more than is needed, goes against the grain. Today we saved about 33% compared to the standard prices and that gives a good feeling. Why do we go, because we do not have fixed working schedules. Whether I delete my 400 emails in the morning or in the afternoon doesn’t really matter. As long as all the work is done by the end of the day, all is well.

Juneau is an evening port call and our departure –all on board time- is officially 21.30 hrs. Then it is a matter of waiting for the linesmen to show up as they have to let go the Star Princess first. That ship followed us up from Ketchikan but has to dock first in Skagway. Here we have another arrival where the ships are staggered. Coral Princess first followed by Star Princess, both on the Rail Road dock. The Statendam at the Broadway dock, which is the closest to town and finally the Disney Wonder at the Ore Dock. With her alongside I cannot get out with the ship. Hence she is scheduled to leave ahead of me.

The weather for tomorrow calls for sunny spells, but very chilly with temperatures in the mid forties on arrival. But the promise is of no wind in the morning and that makes my life easy for docking.

Whatever you think about Alaska, they do have good beer here. The Alaska Beer stand during Gold Rush dinner in the Lido. 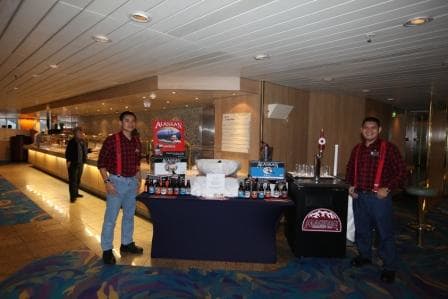