Skagway is in my opinion the most peculiar town in Alaska. At least compared to the other ports that we visit in the Great Land. If it had not been for the gold rush of 1898 the town would have never been there and that makes sense. Every day in the afternoon a funnel wind picks up, blowing from the south through the Lynn Canal and it then whistles through the town where the main street –Broadway- is right in line with it. In the summer time it might be something you can live with but in the winter it must be very unpleasant. When the shops close after the cruise ship season, the town population dwindles to 400 or so (correct me if I am wrong, I am going by the wisdom of the pilots) and I admire the die-hards who can survive the harsh climate. Just a week ago more than 10 inches of snow fell in the upper pass and that meant that several tours had to be cancelled for the ships that were early visitors. If you blot out the Retail shops & Tourism, then I think that Skagway still comes quite close to what people call a “Frontier town”. 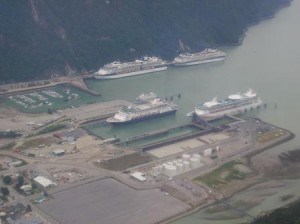 Overview of Skagway docks. Railroad dock to the top and the ore dock towards the bottom. This is an older photo so it shows two celebrity ships at the Railroad dock and a RCI ship at the Ore dock.

We had great weather during our call. When we arrived it was wind still so I could let the Statendam just float into the berth. Holland America docks at the Broadway pier which from a guest perspective is the best one, as it is closest to the town. From a navigational point of view it is better to dock at the Railroad dock which is in the shelter of the mountains and not affected by the afternoon funnel wind. However a long time ago the schedules were set up in such a way that the very large cruise ships go to the Railroad dock. If a company has two ships in that makes even more sense as you can then combine the tours. One of those tours is a trip with the local railroad and the train simply parks in front of the gangway. Today the dock was occupied by the Coral Princess and the Star Princess which filled the two berths to capacity. There is a plan to extend this dock as next year a Solstice class ship of Celebrity is scheduled to start calling and if no adjustments are made, then it would not be possible to have two ships alongside there at the same time. The Broadway dock can only handle one ship and the Statendam just fits in, so there is not much room for parking larger ships there. Although we do squeeze a Vista Class ship in if needed. In between the Broadway and the Railroad dock is the ferry terminal of the Alaska Marine Highway. On the other side of Broadway is the Ore dock. Officially a cargo terminal to load ore coming out of the interior but in the summer time mainly in use as a cruise ship dock for the overflow. Meaning that ships on a one off call, or on a 10 day cycle, will be docked here as the regular callers get the better docks. In principle there is nothing wrong with the dock, it is just a very long walk to town. Today we had the Disney Wonder alongside there.

This funnel wind that picks up in the afternoon is a worrying factor for all ships captains. When leaving any of the docks, you have to go astern and that makes steering much more difficult. Then the moment that wind comes blasting up the Lynn Canal and catches your funnel on one side or the other, you can have a real problem. 30 to 40 knots of wind on the side of a cruise ship, makes the ship drift very quickly to either the Broadway dock on the East side or the shallows on the west side. Something to avoid at all times. I once stayed until about 11 pm in the evening waiting for the wind to die down sufficiently before I felt safe to leave the dock. All the cruise ship companies have recognized that danger and now together pay for a tugboat to be on standby at all times.

That tugboat can then help steering or just help with pushing the ship around when in the middle of the bay. Tonight we did not have that problem as the wind subsided by 20.00 hrs and just before 21.00 we could pull out.

Tomorrow we will be in Glacier Bay, and the weather forecast is a bit gloomy. Still that normally does not affect the sightseeing as the glaciers create their own micro climate. We have received a “whale waters” notification which means that so many whales have been sighted in the bay that we have to go slow at certain areas, where they are congregating at the moment. At least it will mean that there will be enough wildlife to see before we get to the Glaciers.