Because the ms Westerdam is island hopping in Greece, it was not really possible to join her any earlier. Flying to Santorini or Mykonos is a challenge enough under normal circumstances but when the Etesian winds are blowing (and you never know when the blow) then the flights to the islands get easily cancelled. The Etesian winds are a wind that comes from the north, from the Hungarian/ Bulgarian area where on a regular basis a high pressure system forms which generates very strong wind, up to wind force 7 to 8 is not unusual. And that comes “blowing down a gale” straight over the Greek Islands. 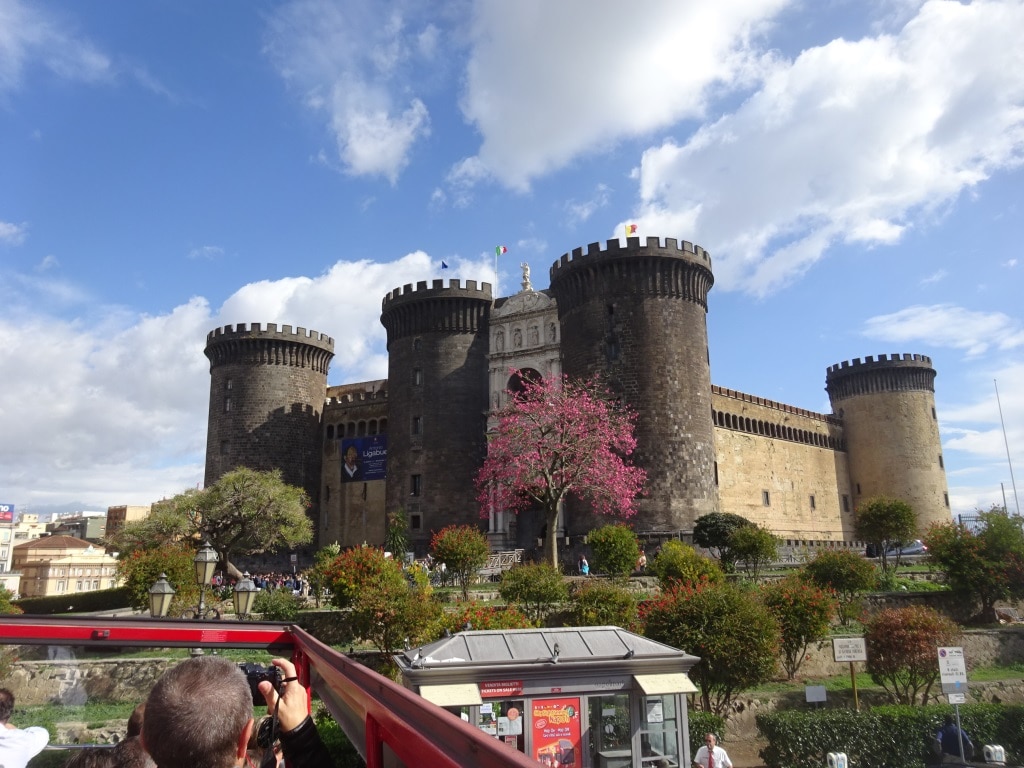 The Castel Nuovo dominates the down town area and is the first thing you see when coming off the ship.

So the best option for me was to park myself for two days in Naples, get over my jet leg, prepare for the coming school class and see a bit of Naples at the same time. The flight took me from Miami via Charles de Gaulle (CDG) in Paris to Naples and the whole happening lasted well over 24 hours, mainly because a Naples connection is not a main route and thus the flight connections do no tend to have a good flow through.  8 hr. wait in CDG airport as a result.  This is a most peculiar airport as everything is focused on getting you out when you arrive. There is no signage or information to direct you to another terminal if you continue your flight into the European Interior.  So even for this experienced traveler it took a while to figure out how everything worked. The main failure is that there is no signage between the International bit and the domestic bit (which includes the whole of Europe) you just have  to follow the exit signs; when you get to immigration there is some tentative information about where the next terminal might be. Strange thing is that apart from immigration (understandable, you are entering Europe) you also have to go through another security check again. They do not seem to trust anybody who comes from anywhere, and this happens while you have not left the secure area yet, when you are in transit. The airport has been renewed completely recently but I cannot understand how the French with their creativity and culture can create something so stark and depressing.  Nearly everything is grey and dark with on occasion an explosion of Orange. (= toilets). Taking the bus into Paris for a few hours was not really an option as it was Sunday and there was a reduced service.  I know from experience that this makes it difficult to get back on time. 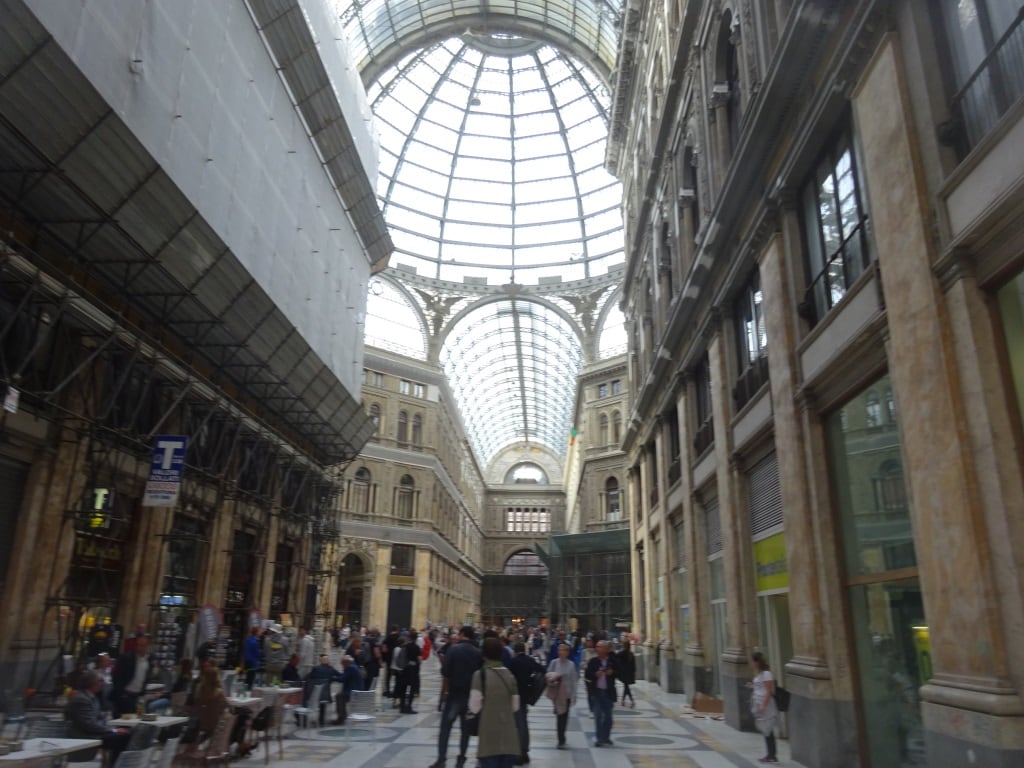 Another thing right across from the terminal but a bit hidden from view an old fashion style shopping mall.

Naples turned out to be better; the agent parked me in a Hotel about 500 yards from the cruise terminal and that is also downtown at the same time. The basic street plan of Naples is a sort of half round with the port as its center and if you are in it you only have to walk up the hill or sideways to see it all. 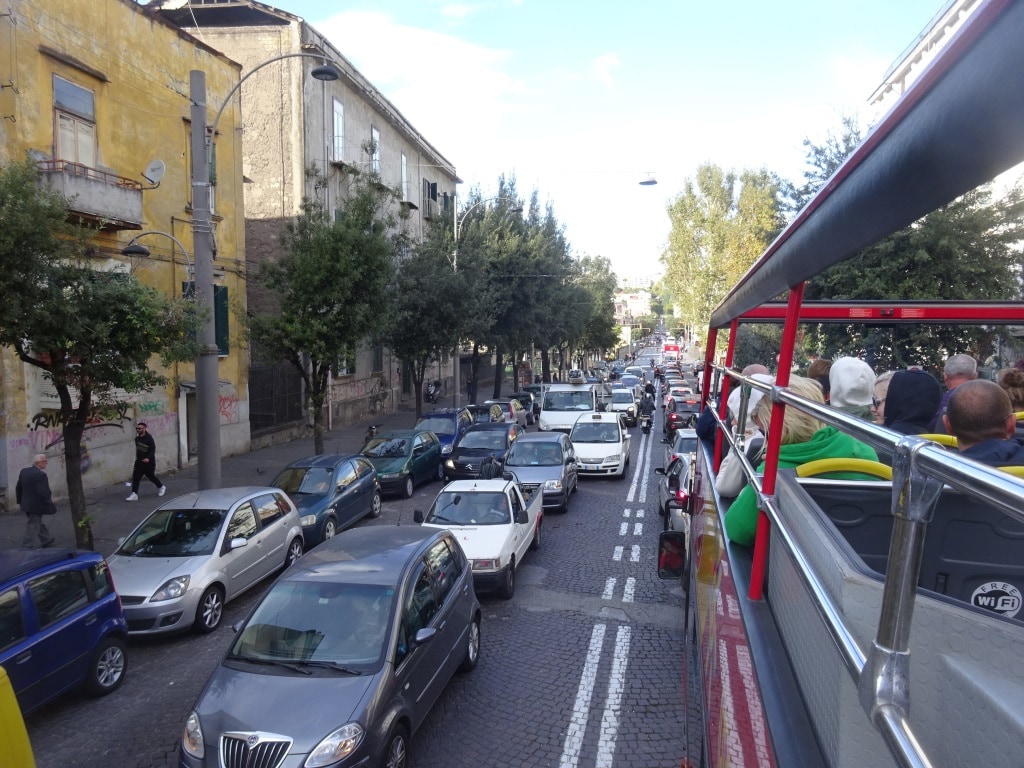 This is normal for Naples. And not even close to rush hour. Note the mopeds driving over the white line. I think they are convinced that this white line was especially drawn there for them.

Best way to get the feeling for a city, especially for something so chaotic as Naples, is to take a city tour. Welcome Big Red Bus. Easily to find; outside Castel Nuovo next to the Cruise Terminal. For 22 euro’s you are happily driven around Naples via two routes. Due to the small streets of Naples, buses and even bigger cars cannot go everywhere, so the hop on hop off route is split in two. One follows the coast line to the west and the other does part of the old city, via the main thoroughfares. My compliments to the Drivers. Taking a Coach around Naples is not for the faint hearted. It is called a hop on hop off but hardly anybody is hopping as it is better to do the whole route and then walk to where you want to go. Also in mid afternoon it is not certain at all that you can hop back on again as the Bus might be full and you are not allowed to stand in the bus until there is space. Not allowed to stand makes sense as the driver has to break often and most of the time very sudden, to avoid motor cycles, scooters and small cars whose owners all think they are training for the Grand Prix and traffic rules are not for them but for the rest of the world.  It makes crossing the road an interesting experience. If you wait you never get across so you observe the flow and if there is a small gap, you just walk. As far as I can see, Naples invented the traffic Jam, although it is a fast flowing one. Also a constantly honking traffic Jam where each hole is filled with scooters and motor bikes. Neapolitan’s are friendly and outgoing, until they step on or in something motorized, then “an aggressive full speed ahead” seems to be the only goal in life. 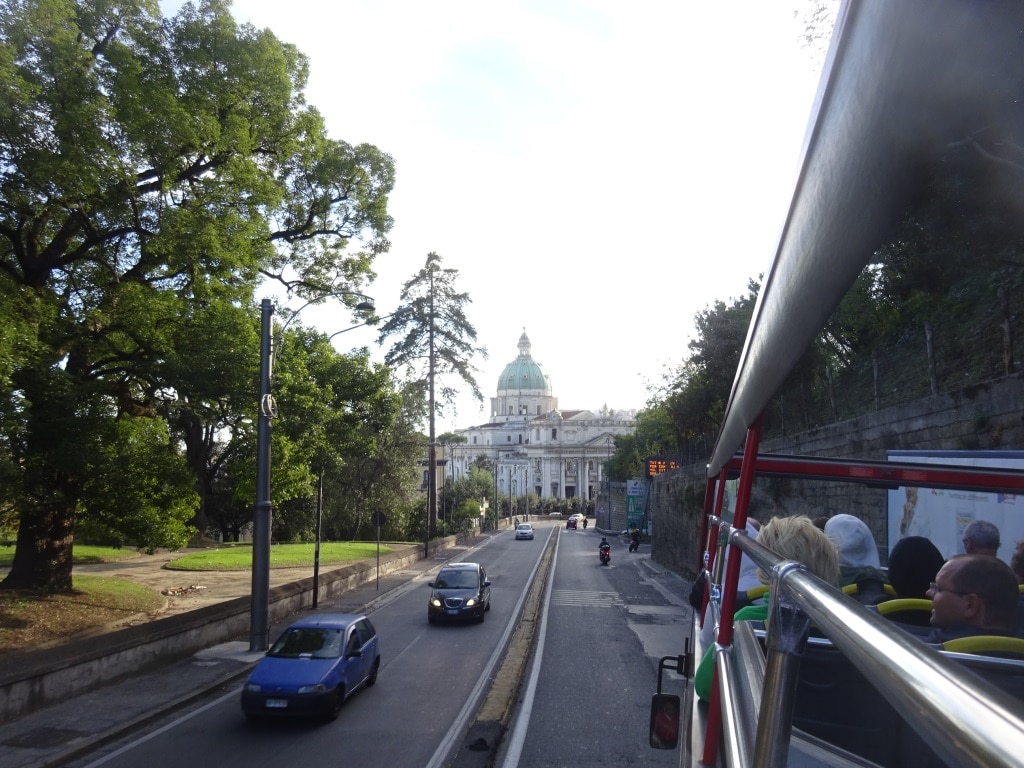 Something I have found in more countries is that they built a copy of the St. Peters of Rome Church. This one is on the top of the hill at San Gennaro catacombs  and is a complete miniature version of the big one in Rome. There is one in Holland as well. I believe also one in England somewhere.

Do I like Naples ? Let’s say I found it fascinating. It is an old city; choc-a-bloc of old stuff going back to the Romans and before, but it is also full of noise and pollution. Neapolitan’s are very friendly people but do think that the whole surrounding world has to be an audience to their conversations, either face to face or via the phone; so do not expect to sit in a restaurant or small coffee shop for a bit of piece and quiet. For that you have to go further out of the center where there is a more space. In the old town it is just wall to wall noise and you have to be constantly on the lookout for all those mopeds coming by. 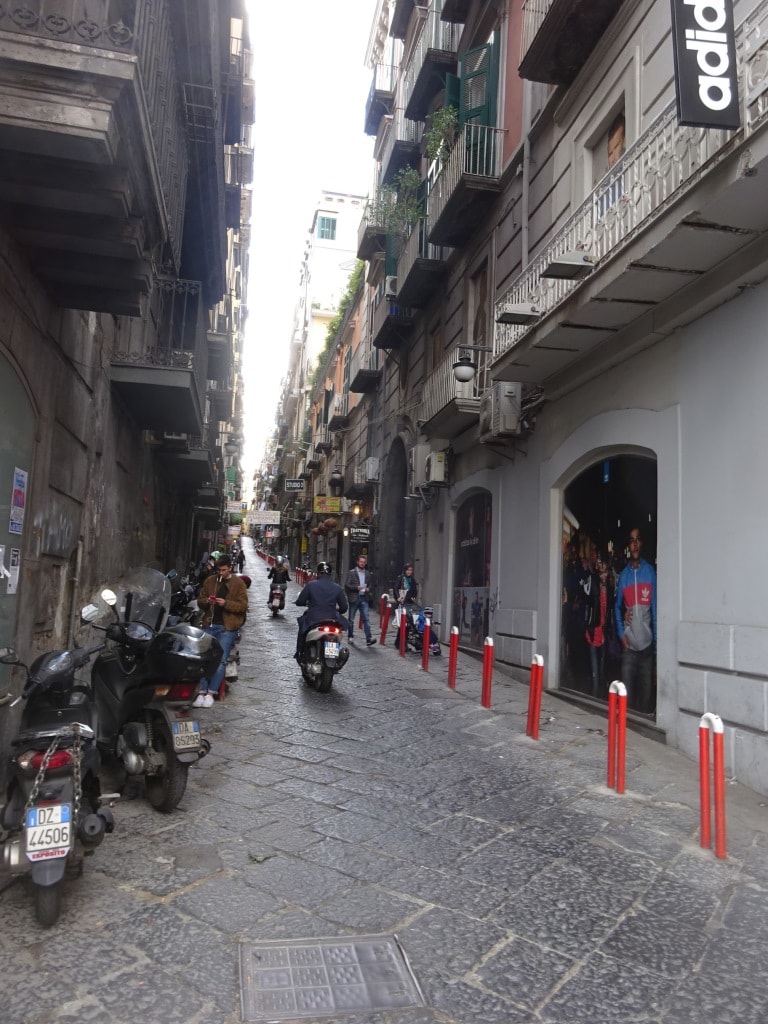 The whole of the center of Naples is one big labyrinth of small streets where the regular people live. That is why most traffic consists of mopeds, scooters and very small cars.

What is nice to do, if you have the guts for it, is to walk just one street up from the main street. The whole of Naples is just one big apartment building and behind the main thoroughfares you have the very small streets with all the small shops on the ground floor and the apartments above (still going 5 or 6 floors high) and where the regular people live. Those shops are very small but there is no other option as everything is built on top of each other so there is no room to build a bigger shop or expand upwards. Square cobble stones and big basalt blocks make up the pavement, so you need good shoes but it makes for a fascinating walk.  Is Naples dangerous? Yes if you walk around with your Rolex, expensive Camera, jewelry or a Gucci bag, then you invite a “fly by / rip off of your bag by a scooter but if you dress normal and behave normally, then there is no problem in all the main areas of the City. 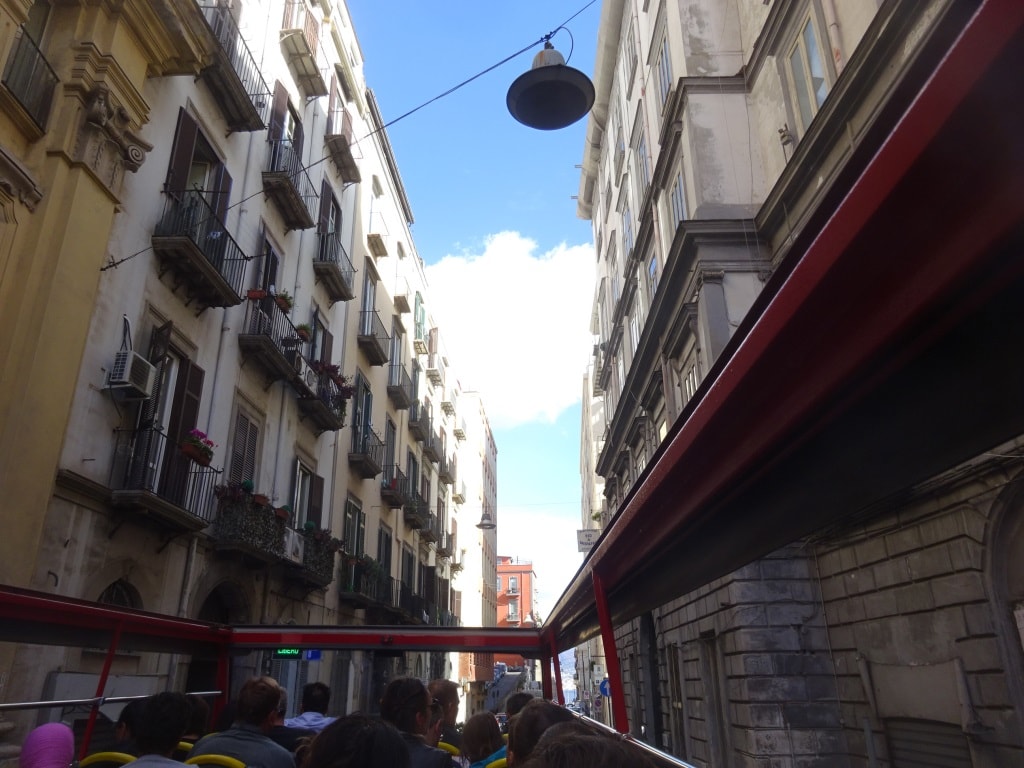 This is a wide street as a bus fits through. This is typical for most of downtown Naples, apartments go six or seven high. I wonder if they all have lifts.

Whichever town or place I visit, I try to make it a point to find Real Estate agents. House prices combined with interior photos of normal houses and apartments give good idea about what the whole area is about and how people live. As downtown Naples is all built up, the only way to recognize a nice building from not such a nice one is the upkeep on the outside, as most of the architecture is similar even if it varies in style from Romantic, to Regency to Neo-Classical. So looking for good paint work and no TV wires on the outside is the first step and then if the pavement in front of the building is clean. Naples is a bit of a dirty town, so if it looks less dirty around the entrance than the rest of the street, you know that the price is going up and the inside will look good. In downtown, the price is roughly a 100,000 euro’s per room and depending on the quality it hovers for a 4 to 5 bedroom in the region of 500.000 to 700.000 euro’s. More bathrooms and a nice view and it tops the 1 million; if you want good inside parking, 1.2 million. Noise and chaos come free of charge and as there is a church within 300 yards anywhere it comes included with a free wake up service at 07.30 every morning.

Tomorrow I will board the Westerdam at the cruise terminal located just around the corner. I had a look this morning to see how to get there, if there would be no agent to pick me up. Naples is building a new Metro /Underground Line and the whole area in front of the Statione Marittima is one big building site. Everybody has to walk around this building site so I thought I had better do to a bit of Voyage Planning before I roll my suitcase out of the door. In 2007 or so, I had a private tour of the terminal which was built in the 1930’s when Mussolini forced the individual shipping companies to merge into one national company. 10 years ago, you could still see the 1st,2nd and 3rd class waiting rooms where people assembled before they boarded the ship. The place looked a little bit dilapidated then when I looked in the various rooms. That has all changed now and the large luggage and holding areas have been converted into meeting and conference rooms. Pity about the historic stuff but at least the building can now also be used outside the Tourist season. At the moment there are everyday at least 3 or 4 cruise ships in but that will get less in November. Yesterday we had MSC, Pullmantur, Costa and Albatross and today there was an Apartment of the Seas, and a Viking ship. If the schedule is right, then the Westerdam should be all by herself tomorrow.

The Westerdam is about to end her last Mediterranean cruise and will stop at Civitavecchia for Rome as the turn over port. Here my 7 eager and new Navigation Officers will board and then we will commence our Trans-Atlantic crossing to Fort Lauderdale. 3 ports and then 8 glorious days at sea.

I will leave you with a Napolitan puzzle: what are they trying to achieve here at the Bus stop: 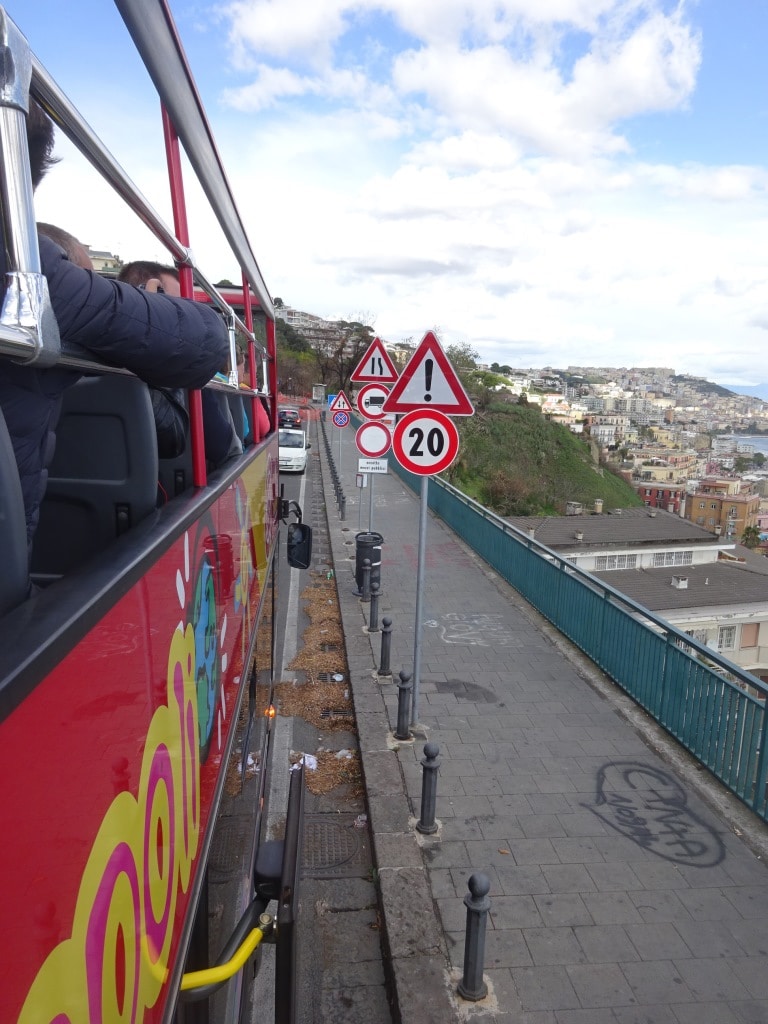