Late yesterday afternoon we sailed through the Windward Passage and the Trade wind fell away. The ridge of islands here, Cuba, Hispaniola and Puerto Rico further to the East all have mountain ranges and they ensure that there is a significant difference in wind; rain and other meteorological phenomenon between the areas on either side of the Windward Passage. Once completely clear, the wind has the tendency to return to the East or South East, similar to the Trade Winds but it is not constant. Regular depressions coming in from the North Atlantic, especially in the winter months can disturb this pattern with great frequency.

And we were not disappointed, a frontal ridge, a small depression was lying off the Windward area and while on the south side in the passage we had no wind at all, and once out it turned to the North East. By the next morning while sailing North of Cuba the frontal ridge came over and dumped a fair amount of rain water on the ship. Not appreciated by the guests but it made our Bo ‘sun very happy as it washed all the salt off the ship which had accumulated yesterday due to the strong trade winds. Once we were through the showers, the winds changed to the North West and later on veered back to the North East. And that is what we are supposed to keep all the way to Fort Lauderdale. 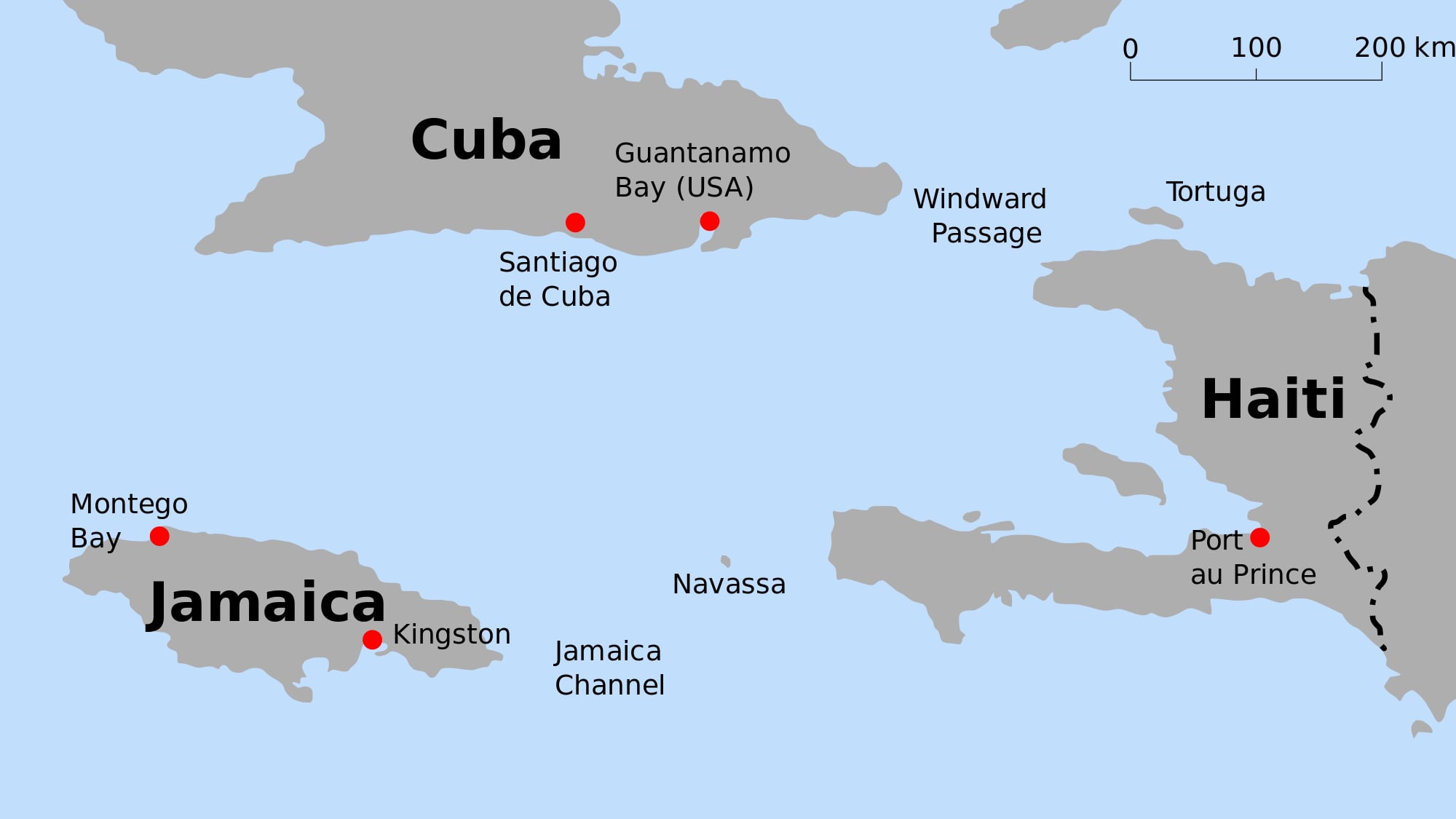 The Windward Passage, Gateway to the Caribbean.

There is a lot of traffic going through the Windward Passage and together with the Mona Passage further to the East it is the best connection to get in and out of the Caribbean so we see a lot of Container ships and Tankers coming and going from the Panama Canal. To regulate all these ships that are converging from six sides into the one passage there is a Vessel Traffic Separation scheme in effect, to keep those going north separate from those going south. Once north of the passage and heading up to Florida the same is repeated above Cuba in the Old Bahama Channel. For the Nieuw Amsterdam it adds about 20 miles to the journey as following the prescribed route means staying much more to the East and much more to the North of Cuba, than if we would sail a straight line. But it is now a lot safer than in the past as then it was a free for all and ships would do the strangest things; mostly to reduce the miles to make to the absolute minimum. So going through the passage we now hugged the Haitian side and once out, we hugged the Bahama side of the waters.

I used the day to wrap up my business here on board as tomorrow I will transfer to the Westerdam. This ship is about to end its European season and return to the USA for the winter. My regular readers might remember that I went to Europe with the ship in April to conduct a school class on board with new Navigators. Well we are going to do the same thing again, now sailing the other way. Holland America has found once again 7 eager navigators whose dream in life it is to join the company and we are not going to disappoint them. So I will fly from Miami to Paris and from there to Naples to join the Westerdam in that port, sail with her to Civitavecchia where the new officers will join for 14 days of immersion in the ways, routines and traditions of Holland America.  As there is a gap of three days, I will have time to prepare for the classes, get rid of my jet lag and explore the city as there seems to be a Hop on hop off Bus with three different routes.

On arrival in Ft. Lauderdale we will be together with the Harmony of the Seas and the Caribbean Princess who sailed ahead of us from Aruba two days ago. Then it is time for me to go to the airport. So tomorrow and the day after there will be no blog, but I hope to be able to share some experiences while visiting the city of Naples.