Even with going full out, it takes two days to sail from Aruba in the lower South West Caribbean to Fort Lauderdale. Of course we take the shortest route possible and that route takes us through the Windward Passage West of Haiti into the Old Bahama Passage North of Cuba. As long as there is no canal cutting through Cuba, we have to sail around it and that means either going West or East of this Island. For us the East side is the shorter route although if there are Hurricanes pending, then the ships have to sail around the West side of Cuba; but it means a late arrival in the home port. We want to arrive even earlier than normal to ensure that the Guests can disembark as per expected routine. We want to avoid any delays that might be caused by the full Crew Inspection which the CPB will conduct in Ft. Lauderdale.

Our route to Fort Lauderdale. Between 4 and 7 pm. we were in the Windward passage and then turned North West.

Every 90 days, every crew of every cruise ship has to attend such an inspection and that means that all crew goes ashore in groups to have their passports inspected and to get their I -95’s (crew landing permits) endorsed. With 900 crew that takes some time and the speed of the processing depends on how many officers the CBP can make available. Normally the ship ensures to be alongside at 07.00 hrs. which is the moment the longshoremen start working to take off the luggage. Now we want to be alongside by 06.00 hrs. so we have an hour to get the crew processed and thus we can ensure that the disembarkation of the guests is not affected. Most guests would like to have breakfast and that would be rather difficult if all cooks and stewards would be in the terminal reporting to the CBP. So we go pedal to the metal to makes this possible.

The day started full of rain showers as was predicted in the weather forecast but later in the morning the skies cleared but we had a sunny if windy day. Luckily there are enough locations on board to remain out of the wind and then decide if you want to soak up the sun, or stay in the shade. In my opinion it is a very nice way to end a cruise with two sea days, as it gives all the guests at least one full day to enjoy the ship without having to worry about packing and getting ready to go home. That can be left until tomorrow and for the fast packers until tomorrow evening.  Those who have the worry of how to pack the contents of three suitcases into two, due to all the shopping in the various ports, will have two days to come up for a solution to that challenge.

I had two main things on my mind today; conducting a fire drill with a full debriefing for the ship in the morning and secondly holding my Holland America History Lecture in the afternoon. The afternoon bit was the easiest and I was happy to keep a sold out show lounge attentive for 80 minutes with facts and stories about our fascinating company history. Fire drill takes much more time, as the challenge is always to create a drill with sufficient learning moments so that it is educational and will add something to the routine and skills of the crew involved. So today I put the Bo ‘sun store on fire which is a large area in the bow of the ship and its main challenge is to search for the source of the fire and save any casualties if found. 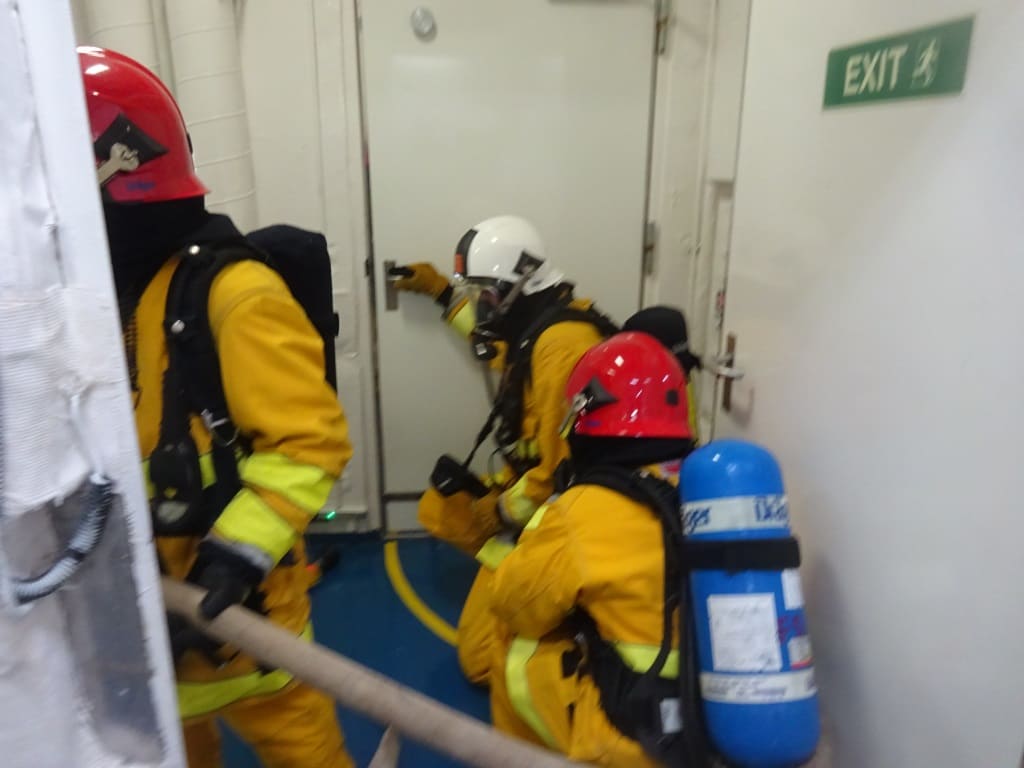 Within 8 minutes from out of bed, in full gear and ready to enter the Hot zone looking for the fire. I was quite happy with that time span.

The Bo ‘sun store is U shaped and by the time I had pumped it full of white stage smoke, visibility was below 2 feet. For teams the only way to find their way out again is to follow their hose and the same goes if there is a relieve team going in. Grab the charged hose and follow it blindly to where the nozzle is. Then do a hand over with the team going out (not easy as everybody wears breathing apparatus) and take over the job at hand.  For a simple fire drill we have at least 40 crew involved; deck, engine and medical officers, petty officers who are in the fire teams and crew who make up the various support groups. If we have a major drill it goes up to 80 or a 100 crew involved. And all these crew have to be in position within 10 minutes of the alarm having been sounded and to be ready to start the attack. Crew rotates, go on leave and come back again and this means that training and exercising is a never ending story. When I get on board there is then the nice chance to have an “outsider” organize something totally un-expected to have everybody hone their skills to an even higher level. 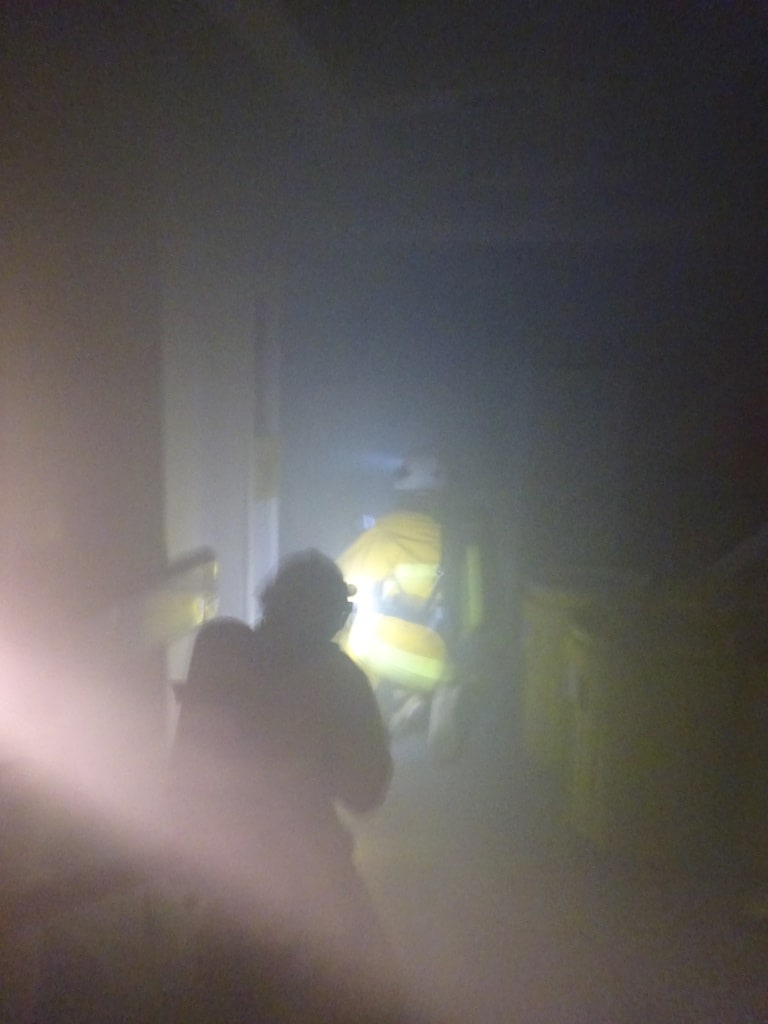 Hurrah for the invention of smoke machines, it makes it so much more realistic.

At 18.00 hrs. we sailed through the Windward Passage and from now on we will head westwards above Cuba. The moment we came in the shelter of Haiti, the Trade wind disappeared and it is expected that we will have a nice and quiet day tomorrow while sailing through the Old Bahama Channel towards Florida.