Another good day in Puerto Vallarta. Although we are marooned on the ship as we cannot go ashore, we are still much better off than other people in the world and thus you will not hear any complaints from us on board. Yesterday was Saturday so no doubt a lot of Holiday Makers will have gone home and I do not think that new holiday makers will come out.  But many Mexicans might still be on the way home so the planes are still flying.

The ship is healthy and well and so are all the other cruise ships out there. In the deep sea and in port. In our port there are currently two, us and the Norwegian Joy.. But that might eventually change.  Our company, which means Carnival Corporation as all activities are co=ordinated, is making short term and long term plans. Based on what we know now, and based on what we can do if the situation changes. So short term we will stay here in Puerto Vallarta with two ships and the Eurodam is due to arrive on the 24th. Eventually, some time in the future, if things roll as is hoped for, a total of 7 HAL ships could arrive as that is the fleet for the Alaska season. We might as well have all the ships on the right side of the Panama Canal for and if when things get better.

For ourselves we will stay here in Puerto Vallarta for the coming days. Can we stay for the very long term?  No, as even a ship without guests needs to re-fuel. There will be a moment that we will run short on fuel and then we will have sail to a port nearby where they have bunkering facilities. For the rest we can last for a very long time as we can source everything we need locally here in Puerto Vallarta.  Where we will go for bunker will be the 1000 dollar question, as there are several ports where we can go to. Thus far even ports who are in lock down have not closed bunker facilities as bunkering can be done on anchorages or at secured docking facilities where direct contact between ship and shore is not necessary. But that is for the far future. 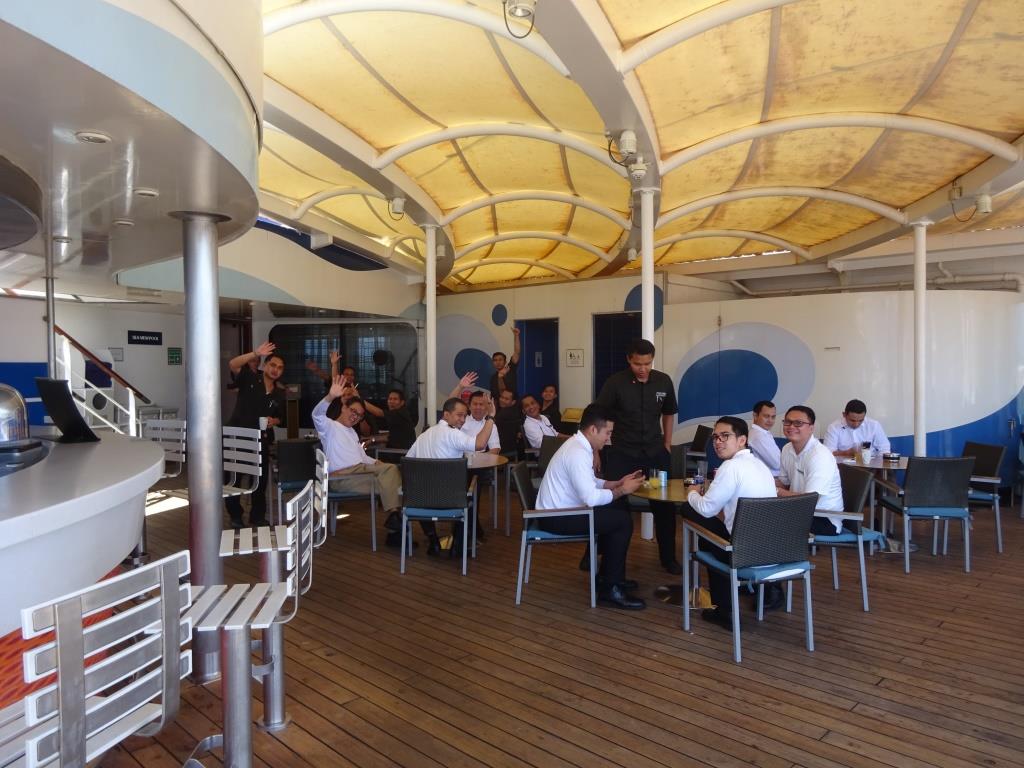 Break time on board. Instead of on the lower decks crew can now sit on the Lido Deck between shifts.

In the mean time we focus on cleaning, we focus on keeping up spirits and we start to focus on more and more training and exercise. We now have the time to go beyond the already very high standards of the company as there is always more you can do. Especially as, and this is not meant in a negative way, there are no guests around that makes us have to go on tip toes.  As an example, we exercise cabin fires. We can only do that if we have empty cabins (which we prefer not to have) and then we have to be careful with the neighbors. Now we have an empty ship and thus all the guest cabins are available. And thus we go, or there I go. So for tomorrows fire drill, I am planning a balcony fire because it would not bother anybody. The smoke machines can come out, and if apart from on the balcony, the smoke goes into the ship, then it will only make the drill more interesting and realistic. It will be up to the teams to contain the smoke as close to the affected location as possible. 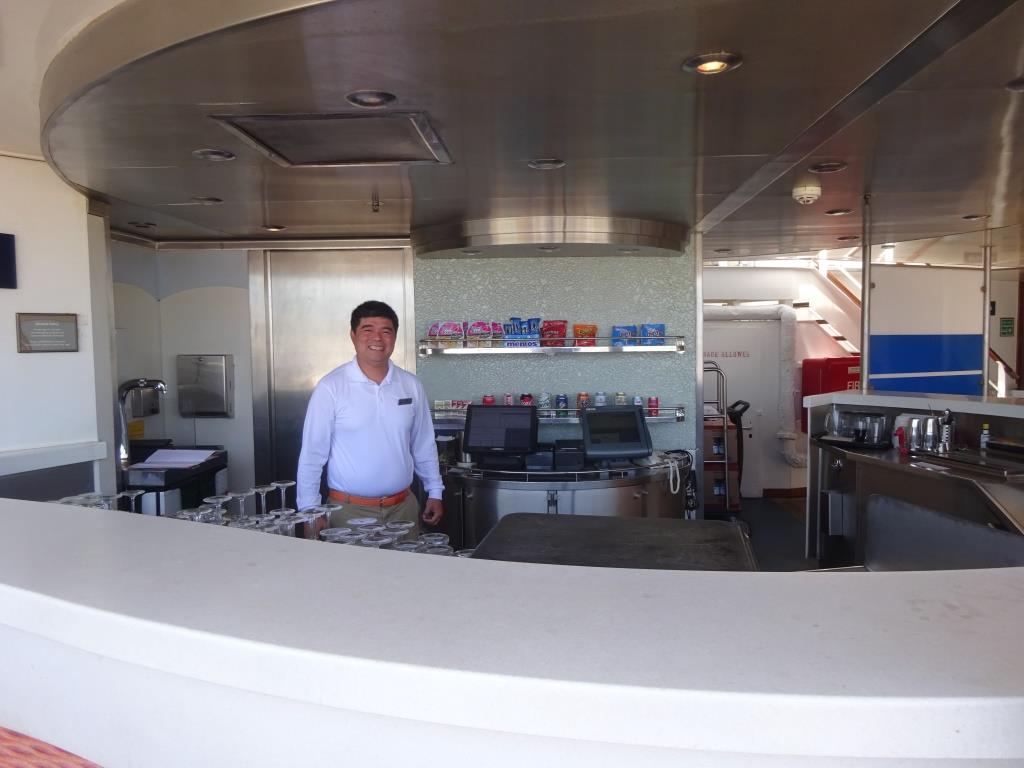 The Sea View Bar is open all day staffed by the Ship’s Bar tenders on rotation. But to avoid crew getting “too happy”  the number of alcoholic beverages are limited.

Shore management is keeping us well up-to-date with what they are doing and planning. That starts all the way at the top, Mr. Andrew Donald, the head of Carnival Corporation transmits regular podcasts and video messages about where we are heading. It was good for all to know that he could confirm that we are probably the strongest Cruise business in the world for weathering this storm. It is the intention to keep the 150,000 personnel that we have working and that alleviates a lot of the concerns that are playing through peoples mind. As long as the families are looked after, then crew will be quite content to sit on a ship far far away. Every crew member is different and we have within the co-operation Officers, Staff and Crew from 145 countries. From the very cool and staid cultures to very emotional but everybody thinks about “how is the home front doing”. 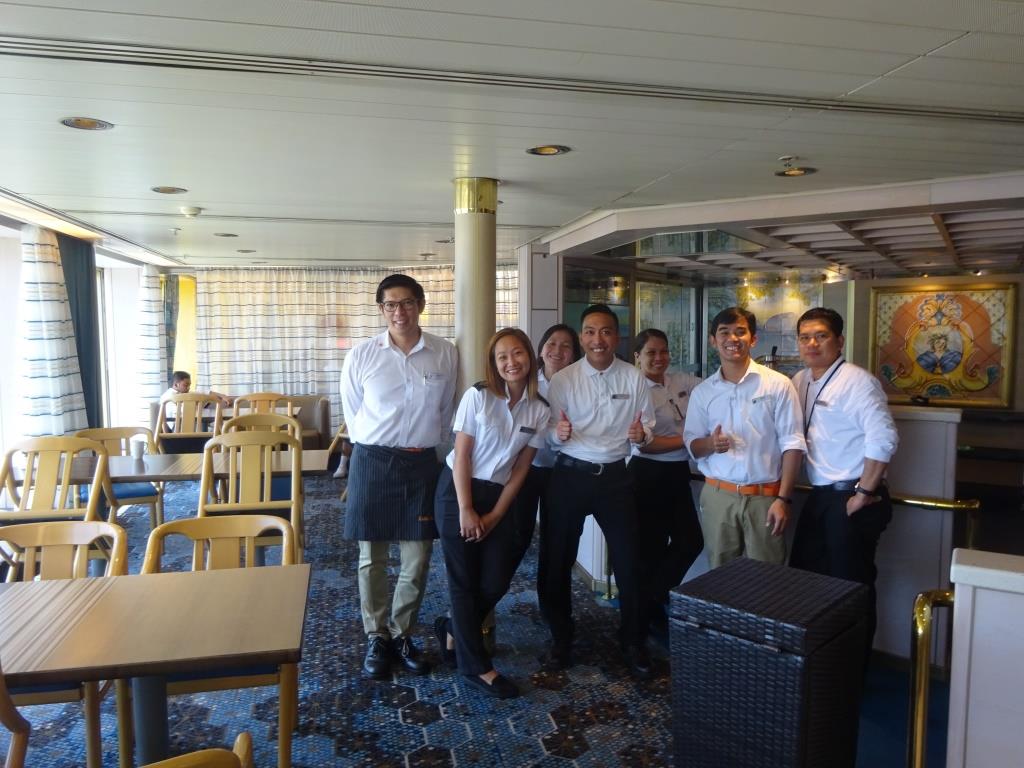 Part of the Lido and beverage team just finished with clearing up from Lunch hour. Then everything is prepared for Dinner which starts at 1600 hrs. and ends at 1900 hrs. Because we are still running work for essential shifts.

For the entertainment for all of us, today was Sunday lunch (Nasi Goreng for the Dutch and the Indonesians) and other foods to satisfy different cultures…….. with free soda’s. And anything free is always appreciating by officers and crew alike. Due to the great success of the “Housekeeping Band” in the Lido Restaurant yesterday, they have now setup shop outside near the Lido Pool as a lot of crew has expressed the desire to do Karaoke. So we give them a bit more space for an audience. Tonight’s movie is Charlie’s Angels and although that might already be out there on streaming, seeing it on the Big Screen is something totally different.

Weather for tomorrow: Same as Today Sunny 28oC / 84oF. But maybe a little less wind. It is a pity that this place is so far from England where I live, otherwise a nice Pied-a-Terre comes to mind for the cold winters.   Instead if the wind is gentle I might ask for a lifeboat to be lowered and we start training the cadets.