Today is our sea day to get to the North Cape and Honnigsvag. The weather followed the weather forecast and it was nice, quiet and dry for most of the day. In the afternoon we got a bit of motion of the ocean courtesy to a weather front behind us which is creating some waves but the Prinsendam is a good surfer and thus the dis-comfort is very minimal. We are on average sailing a distance 12 miles from the shore. Partly because the dotted line between the pilot station of Trondheim and where we go around the corner of the North Cape makes it so, but also partly to stay out of coastal waters.  There is the 3 mile zone (full territorial waters) and we try to stay out to avoid the local rules; and there is the , 12 mile zone, where we stay out of if possible as here the international regulations might vary from country to country. The latter can be quite complicated and brings headaches to every captain. IMO (International Maritime Organization) sets the standards that are approved by every member. But the regulations are allowed to be “amended by the local administration”. So a measure of a Liter of paint in Europe might be a Gallon of paint in North America, and a Jin in China. To avoid going mad and/ or making mistakes we try to plan our courses outside the 12 NM.

Today we also entered the land of the Midnight Sun which in a way we do at the appropriate moment as yesterday it was 21 June; Solstice and the longest day of the day. The sun was already hardly setting when we sailed passed Stavanger but now it will not do so at all until we are close to Bergen. Wonderful for staying up; not so wonderful for sleeping. Although all the cabins have blackout curtains they do not have black out screens so still a measure of light is coming in. But if you want to experience the Midnight Sun (provided it is visible) then you have to pay the price.

We have now sailed from the North Sea into the Norwegian Sea. It is basically the same area and it all forms part of the North Atlantic Ocean but in the good old days of the 17th. Century they tended to name local waters after the nearest Land or Country. The North Sea is different but then the Dutch tend to do things different. We did not invent the phrase “Double Dutch” for nothing. Holland had an inland Sea called the ZuiderZee or South Sea, located to the south of Frisia (now the province of Friesland) so there was some logic to call the sea to their North side the North Sea (Noord Zee). With the Dutch Naval prominence in the 16th. Century the English adopted that name. Before they had called it the German Sea which makes sense as before the Dutch the German (Hanseatic) trading ships made their mark in Northern Europe. When Great Britain became the dominant power in the area, the name was not changed to English Sea. (As now it became political not commercial so the flexibility was gone I suppose). 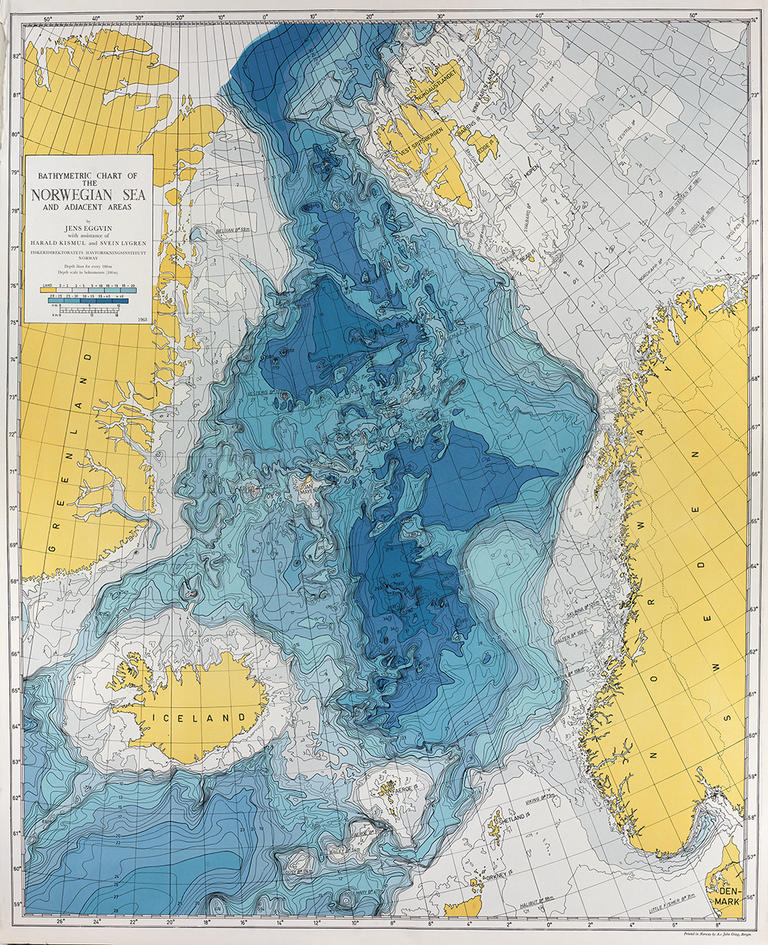 The chart of the Norwegian Sea. The darker the color the deeper the water.

The only real difference is the depth of the water. While the North Sea is very shallow, no deeper than 50 meters and quite often only 20 meters, the Norwegian Sea goes down to a depth of 1000 meters or more, although we are just skirting the edge. That means that while the outflows of the Gulf Stream still bring some warmer water to the coast a lot of cold water comes up from the depths of the ocean. That with fluctuating air temperatures is a nice mix to bring rain, drizzle and fog to the area. And it often does.

Tomorrow we will be in Honnigsvag and as a cruise port it has several things going for it. Close to the Cape but also that you can approach it from various directions. If the weather is bad you can take the inside route but you do not see the North Cape. If you take the outside route, you pass the North Cape twice, so if it is fogged in in the morning you have another chance to see it in the afternoon. And it can be very foggy here. So we will see tomorrow morning what the weather is like and if we can see all the way to the top and if they at the top can see all the way down to us.

What is going to happen is very uncertain. It has been sunny there today and that is not good for visibility but cool as well so things might work out. For Honnigsvag we are expecting: Partly Cloudy with noon time temperatures 7oC / 44oF and a gentle breeze. The captain will be happy with a gentle breeze for docking and the guests will be happy that they are looking at only a 5% chance of rain.

For the crew photos of the Final Prinsendam voyage we feature today the Engine Room teams. 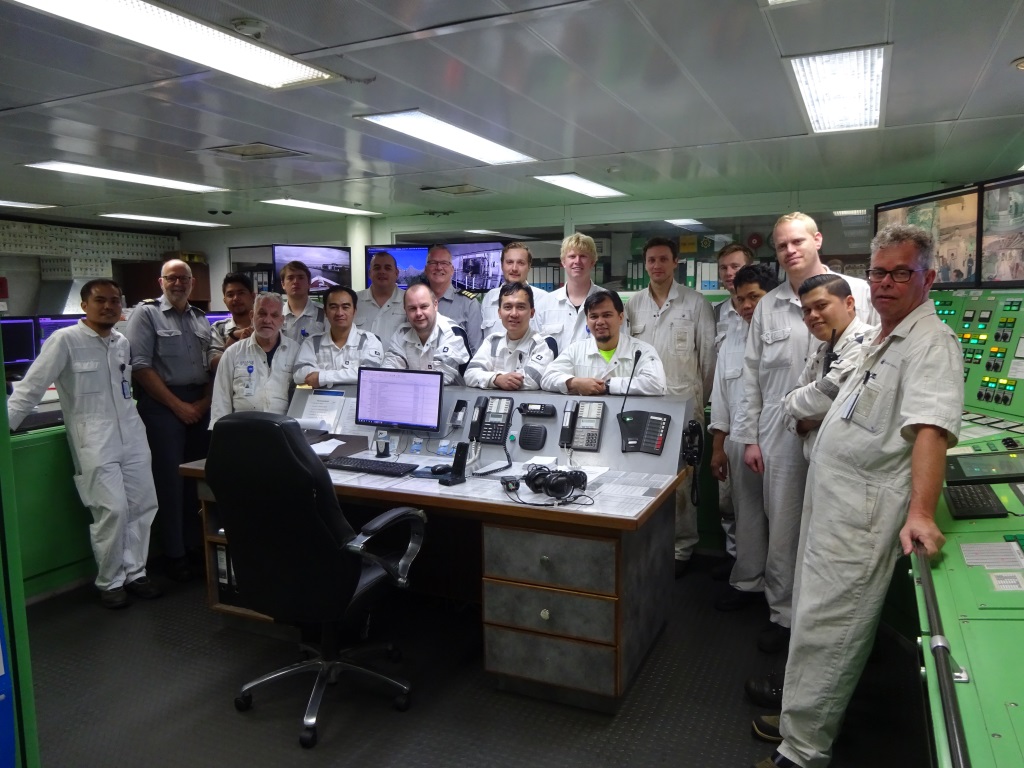 The Engineering Officers of the ms Prinsendam in the Engine Control Room. Chief Engineer Mr. Massolt is in the center with the gold stripes.

Two photos as I could not get them all together in one location without missing the Watchkeepers. 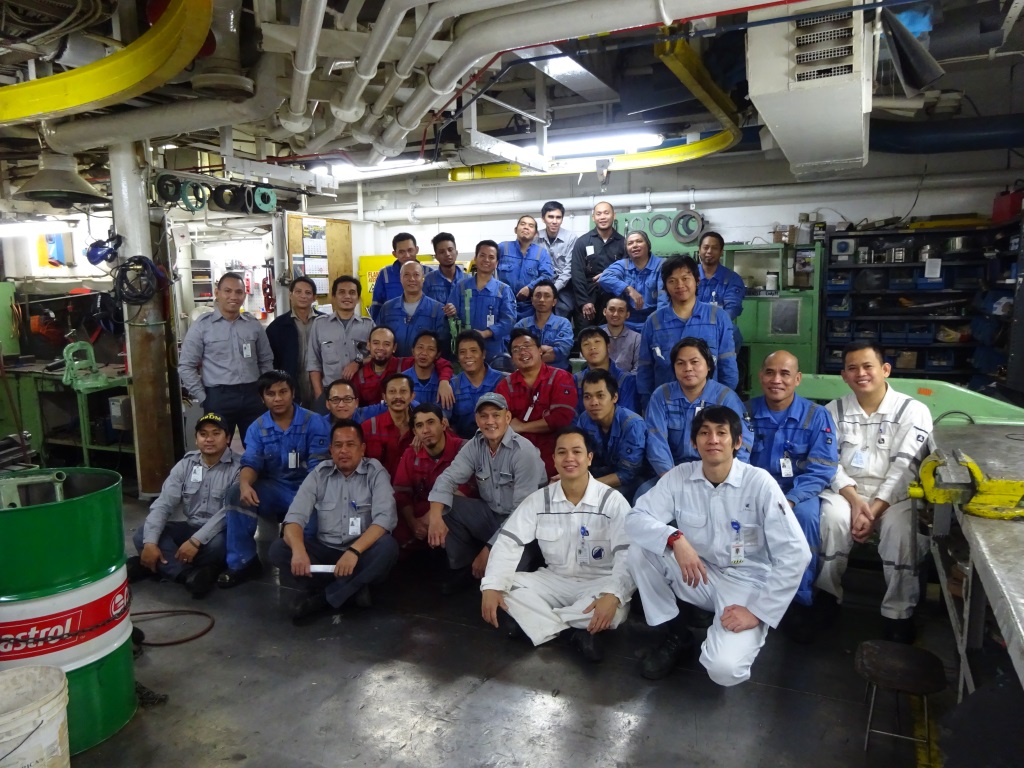