We approached Bergen from the north and that meant a 0500 pilot for a 0800 docking. As it had been sunny in Bergen yesterday, it was very hazy near the pilot station, but visibility was still good enough to see more than 3 miles and thus we did not have to use the whistle to give fog signals. As expected it was busy at the pilot station. Cruise ships most of the time have the same arrival time as it coincides with the departure times of the tours. Ahead of us was the Princess Daphne, picking up the pilot and then proceeding to Flam. Behind us was the Aida Luna and in the mix was also a cargo ship, a tanker with the name of Bro Enterprise, if I remember correctly. So we all trundled with about 12 knots to the pilot station where one after the other received their pilot.

As soon as mine was onboard, I sped up to 17 knots as that would be sufficient to bring us to the dock at around 07.30. That first part from the pilot station is not very scenic; mainly bare rocks dotted with the occasional summer houses. Of interest was that we were overtaken by the Aida Luna. This is the newest addition of the Aida fleet which is a German company and also part of the Carnival Corporation. They have a sort of holiday beach concept onboard, with no main show room or restaurant but buffet service. A novelty is that it has it’s own brewery onboard, where the “Braumeister” produces a good German draft beer. Although the weather was still quite miserable, there were already many Germans milling around on the open decks, eager not to miss anything of the scenery or from the passing of the Prinsendam; visible in all its glory on their portside. The Aida Luna had the same arrival time as us but for some reason wanted to go first. I never have problems with that, if somebody is eager to go ahead, let them go, at least when they are ahead of me I can see what they are doing.

In the end they docked about 5 minutes ahead of me and I wonder if that was worth the extra fuel spent. In the mean time the pilot was trying to figure out if there would be congestion at the point where the ships from the south pilot station meet those coming from the North pilot station. There was a Swedish sail-training vessel coming up and the cruise ship Azamara Journey, which had of course the same arrival time as the Aida Luna and us. However it just worked out that we made the turn at the same time as the sailing ship but they stayed close to the shore so there was room for everybody.

If possible, the harbour master tries to get all the ships close to the old port. Only if you are very long, you have to go to the other side where the cargo port is. That is a longer walk to get to the old downtown area, so each cruise ship captain hopes that he will get one of the other docks. From there it is a straight and fairly short walk to the old town along the harbour. We had such a dock, called Skolten south, and from the bridge you could see downtown Bergen laid out straight ahead. The dock is a sort of extension from the old inner harbour and from there the little ferry boats leave that connect Bergen with the various outlaying islands. One of those ferries decided to cut between the bow of the Prinsendam and the dock wall. Not wise to do, as it is very difficult to estimate how fast a ship is approaching its berth and you are exposing your passengers to unnecessary danger. As the pilot said;
“They are out there, you just have to find them………….” 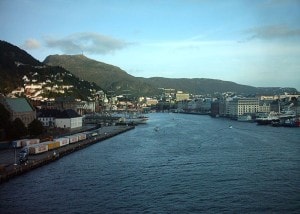 So we docked happily across from the Aida Luna, and the Azamara Journey docked at the Bontelabo berth behind the Aida Luna. The weather improved nicely and by the time we left it was very pleasant weather with the sun peeking through on occasion. The Southbound departure is much more scenic, as we pass through a narrower fjord with on one side quite expensive real estate to look at. It is also a shorter distance to open sea and by 1900 hrs. the pilot was off the ship. Time to crank the engines up to sea speed and aim for Tilbury, the final port on our cruise.

The weather should be sunny tomorrow, so a nice end to our Norway cruise, but sunny weather can also cause that hazy stuff to develop. That will mean that I will be busy blowing the whistle again. Maybe we have some luck and we will not have to wake up the guests with the balcony cabins too early.