Today we saw the arrival of summer, at least according to the calendar. As far as our cruise was concerned, Alesund turned out to be the best day of this cruise, apart from the Kieler Kanal. It was clear, dry and not too cold. Further south, in Bergen, they have had a few days of sunshine but it is supposed to be gone by the time that we will get there. However you treasure every moment that is given to you and thus we savored the good day in Alesund. Alesund is one of my favorite ports in Norway for calling at. It is nestled in the lee of the hills, we dock right in the down town area and it has this flavor of a small Norwegian market town.

By 6 am we re entered the fjords again and from there it was only 5 miles to the dock. Alesund has the option that you can dock at both sides of the town and you can even get from one side to the other by boat through a sort of canal but without locks. Very small cruise ships, including the Hurtigruten docked at that other side as well but it has now been decided that the south side harbour of the town should be developed for the cruise industry and even the Mega Liners should dock there. The dock area has been spruced up and instead of the warehouses there are now apartment buildings. A program has started to extend the piers and eventually two big ships will be able to dock there. As an exercise they will have the Queen Mary II tomorrow, who, as she will be by herself, will just fit alongside the existing dock. For the small Prinsendam it does not matter of course, 100 meters of dock is more than enough as long as there is sufficient water. 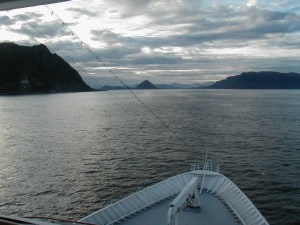 View from the pilot station towards Alesund.
I mentioned a few blogs ago, when going to Molden, we passed by here as well. Molden and Alesund are served by the same pilot station. Thus when entering the fjord we saw the same Norwegian “Sugar Loaf mountain” again. This time we kept that mountain on our portside as Alesund is located right behind it. That led us to the south side docks. 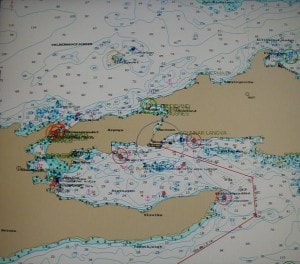 The normal approach in the harbour to the dock is to hug the southern shore and then make a sharp turn around the shallows to the northside where the docks are; at least if you prefer to dock nose out, to be ready for departure.
In that harbour there are some shallows in the middle. Big ships will have to swing in the bay and then back in but the Prinsendam can nicely sail around it and then approach the dock from the west side, instead of backing in from the east side. Although both maneuvers are equally easy, each captain prefers to see with his own eyes what is going on, while approaching, instead of relying on an officer aft. However good that officer might be. While making the final turn to the harbour area, we saw a 37 meters high tower of pallets on the tip of the land. This was the planned bonfire stack to celebrate midsummer’s day which was to take place on the 23d. This pyre was to be the highest ever achieved. The fire is started at the top and then the whole tower is supposed to burn downwards. Last year, the torch point on the top collapsed inwards, causing the foundation to burn first and that resulted in the whole tower crashing down. As per pilot, great care was taken this time, to not let that happen again. 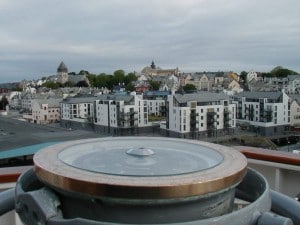 Alesund downtown from the bridge wing.

As said the weather remained nice and wind still so when we departed it was the turn of the chief officer to get the ship off the dock and bring her to the middle of the harbour and then let the pilot do his job. An easy job he had this time. A few course changes and off he was again, leaving us to sail straight out of the fjord back into the Norwegian Sea. Tomorrow we will be in Bergen and it looks like it that it will be a whole traffic jam of cruise ships going in. A traffic jam in the rain of course but that we are used to by now. At least it keeps the fog away.