We were happily docked by 07.00 hrs. Ready for a regular turnover day, in other words, regular – controlled-mayhem.  Getting the guests ashore is not so difficult, they all have their disembarkation colors which relate to their luggage and they are being called off group by group. By 10 am. they were all gone and yours truly could saunter ashore to show his face to the CBP to ensure that he was still legally the same person from the cruise before and to help achieve the all-important “zero count”. Everybody really being off the ship………………… Once that is achieved, shore side can prepare for the wave going the other way.  And with it being a Thanksgiving cruise, it was a very excited wave with lots of little cruisers charging up the gangway. 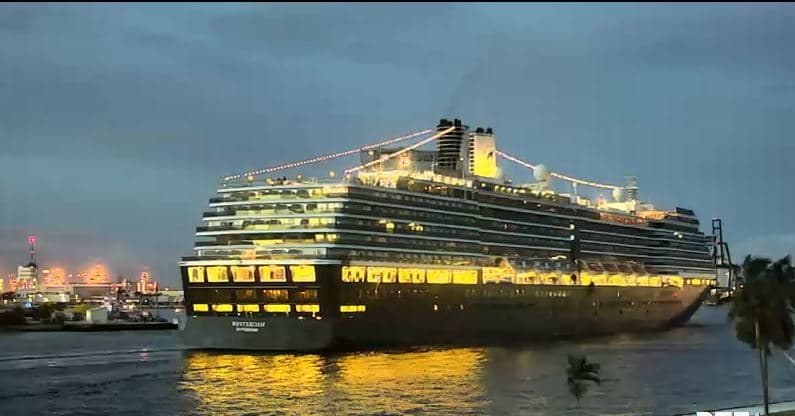 ms Westerdam arriving in Ft.Lauderdale. Screenshot from the web cam in the port.

The company had also invited a group of 80 Sea Cadets to visit the ship and be shown around. These are teenagers who are sponsored by the US Navy, with the hope that they eventually will join the forces. It was strange to see that they were in combat fatigues and not as we in Europe are used to with white caps and tallywackers. But they were also excited; especially when it came to the Lido Lunch, each station was visited several times by most of them. First time I have seen somebody eating a pepperoni pizza with pork in and coconut on top. (The Italian and Far East food station are next to each other) I do not see these guys coming back as Holland America employees but seeing a ship might strengthen their resolve to seek a career on the water. And maybe later we see them coming back cruising with HAL when they all have family’s so I am all for it.

The Westerdam docked. In the back ground the Largest “apartment of the seas” the Allure of the Seas. (Web-shots taken by Lesley Schoonderbeek)

Thus most of the controlled mayhem is coming from the shore side. A whole wave of service personnel and sub-contractors descend on the ship to do all the necessary work to keep all the equipment going. Our engineers do a lot themselves but nobody is a real coffee machine expert and for those specialized jobs we have regular contracts with shore side companies. What we also do not have on board and thus he comes from the shore side is a piano tuner. Every week we hear the ping ping and poing poing rippling through the ship, when the tuner goes from lounge to lounge. The gentleman who is doing this I have seen coming on board at least for 10 years if not longer. Now thinking about it, I have never seen a Lady piano tuner. They must be out there, I suppose, but I have never seen one on the ships; and we get tuners on board all over the world. Once we had a Piano Tuner on board in one European port who had a baby with him in a stroller and the little chap slept through all the noise his father was making but thus far I have never seen a lady tuner.

My class of trainees showed up as scheduled, right at the moment I was stuck in immigration and helping the zero count. I hate that as I like to meet and greet them when coming on board, but the three week course has now started. I have a Lady Officer from Holland, a Lady Officer from England, one Gentleman officer from Holland, and two Gentlemen from Belgium (Dutch side). Four have been with the company before as cadets and one comes from a tanker company. It seems he has finally seen the light that there is more to look at than only oil and pipes.  Today we only had a short get-together as I do not believe in people in the class with jet lag  so tomorrow we will start in earnest.

During the day the weather turned for the worse and it started to rain and of course also during the Passenger Safety Briefing on deck. I prefer the guests to be on deck for a drill so they can actually see the boat, but with weather like this, it would be nicer to be happily inside in a public room. Autumn weather (although the rain is warm) does not look good in Florida.

For the coming days, we have to hope and think positive. There is a lot of rain around, but at the moment it looks like we will be calling at Grand Turk during the only sunny day they will have this whole cruise. So our positive thoughts must go to helping the weather forecast get better.