Well after a lot of somber and rainy weather we had sunshine. High summer at least for Alaskan standards and it was T shirt time all day for those who were in and about the town. The forest fires up country are still raging and the pilot reported this morning that over a 100,000 acre area, just outside Seward, had now been affected. Fire fighters were out in force but were and are hampered by the dry weather and the winds that are blowing. Today there was hardly any wind so maybe they can make some headway in stemming the fires; but in the afternoon a gentle sea breeze started to come in and that might make life difficult again. So I wish them luck up the road and I wish I was a wizard who could divert some of the rain we had in Ketchikan and Juneau up this way.

Coming into Seward always appeals to my sense of humor. Every port entry has something special but sailing into Resurrection Bay and then to Seward during dawn is special. You cannot see the mountains yet, the town of Seward is still hidden around the bend so the first thing you see are the lights of The Alaska State Prison. At least with San Francisco you first see the Golden Gate Bridge before you see Alcatraz. 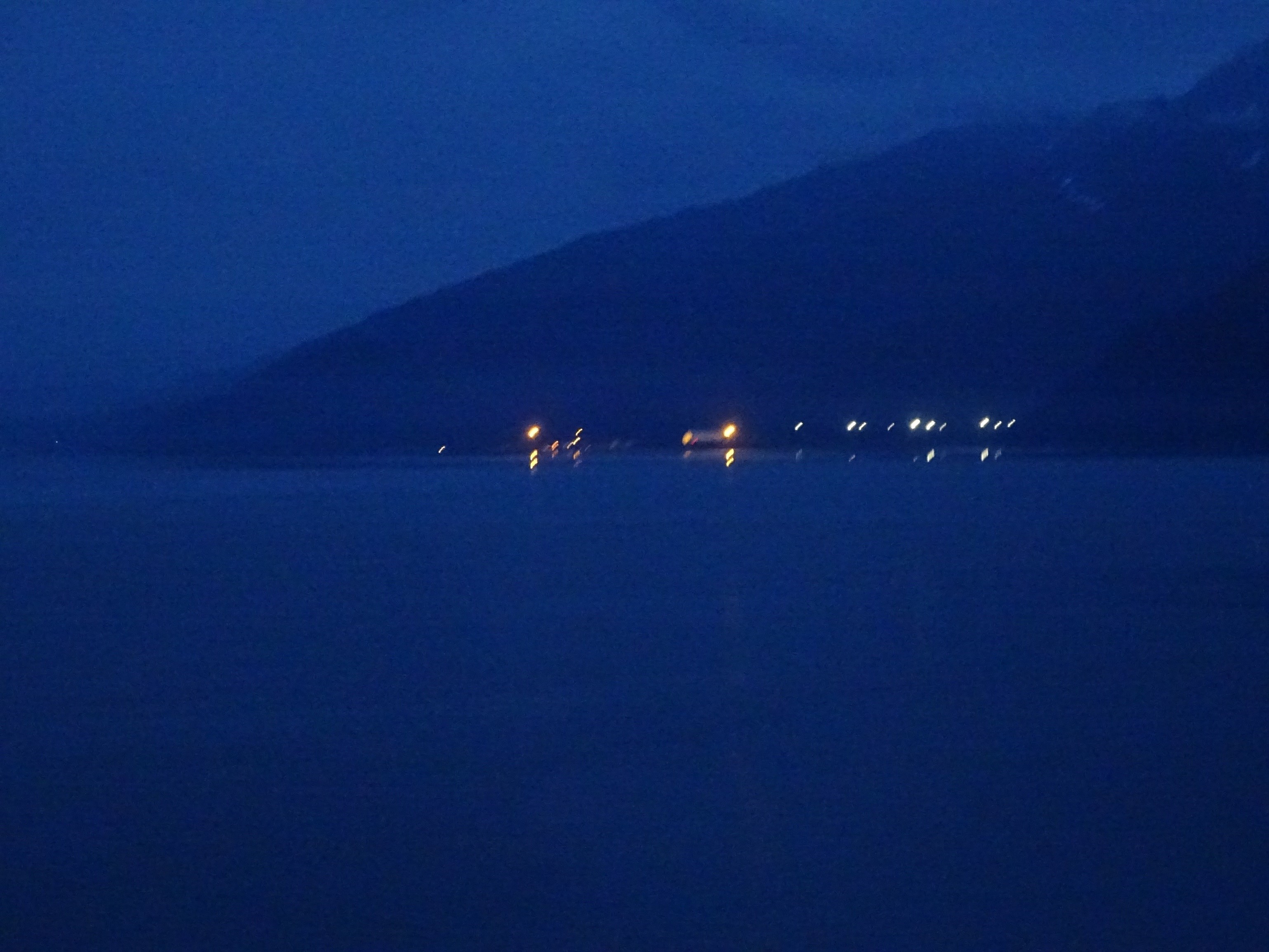 The lights of the Alaska State Prison on the Eastern Shore. This photo was taken at 03.30 this morning during dawn with the ship approaching Seward. I was about to go to standby with the cadets at the aft mooring station.

During daytime the prison is hardly visible from the ship but during the night time you see the lights very clearly. A pilot once told me that this is only the only prison in the country where escaped inmates return to voluntarily. They know that hiding in Seward does not really work as everybody knows everybody here and once out they then realize that the prison has a very effective guard system in the form of Mr. Brown Bear. As per this pilot: on two occasions escaped inmates were standing outside the gate not very long after their escape after they met Mr. Brown Bear. I do not know if this story is true, but if it is not, then I am lying in commission.

Seward is a peculiar place and what a lot of people do not realize it is potentially also a dangerous place. And the authorities are prepared for it. Having learnt about it back in 1964. On the 27th. Of March Alaska was hit by an earthquake with a magnitude of 9.2, being the highest ever recorded in the USA, and the 2nd highest in the world.  The epicenter was somewhere in the area of the Prince William Sound when the Pacific Plate moved forward under the American Plate. For more information: https://www.youtube.com/watch?v=XJb98Xep3IY 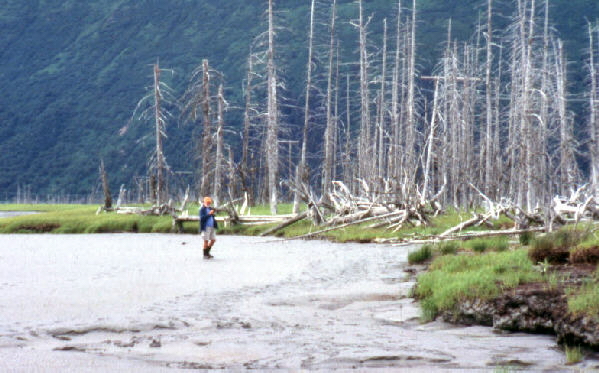 Bare trees. You find them everywhere, where the Tsunami wave rolled inland. (Courtesy unknown source on the internet)

So what is the danger for areas such as College Fjord and Seward with Resurrection Bay? Apart from the shaking and the damage that was the result of the quake, it was the Tsunami or freak wave that it produced. Such a freak wave can be produced by a Mega Thrust Earthquake; there where a moving plate gets lifted up so much that it generates an energy ripple through the ocean. And the only way an ocean can deal with that energy is to create a wave, in a similar way as it deals with the pull of the moon which creates the tides. The wave that was generated thundered also into Resurrection Bay and here we have the additional problem that Seward is located at the end of a fjord through where this freak wave has to channel itself into. Thus it becomes narrower and higher and even more devastating. 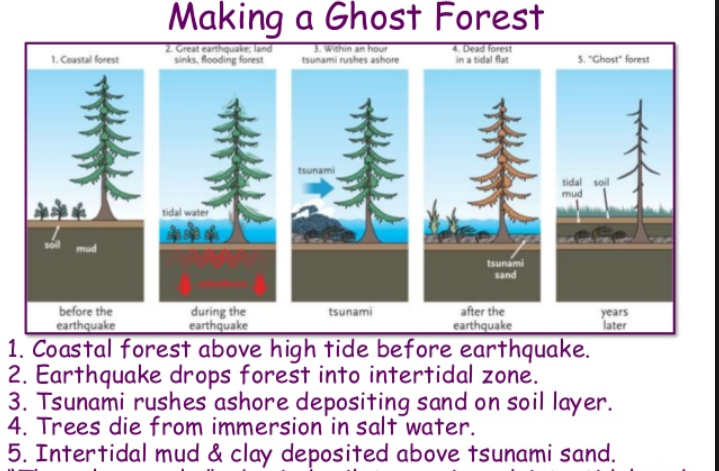 I have no idea who created this very clear description of how it works, as there was no tag with this drawing on the internet. But thank you to the unknown maker, as it makes it very clear.

Until today you can go deep into the valley via the Seward Highway which goes to Anchorage and you see whole forests of naked trees. They withstood the water but only the bare tree trunks remain. Because the Rocky Mountains were caused by volcanic action and the push up of these tectonic plates, down deep in the earth’s crust the plates are still moving so it could happen again. And thus the authorities have put plans in action for when another tsunami would occur. 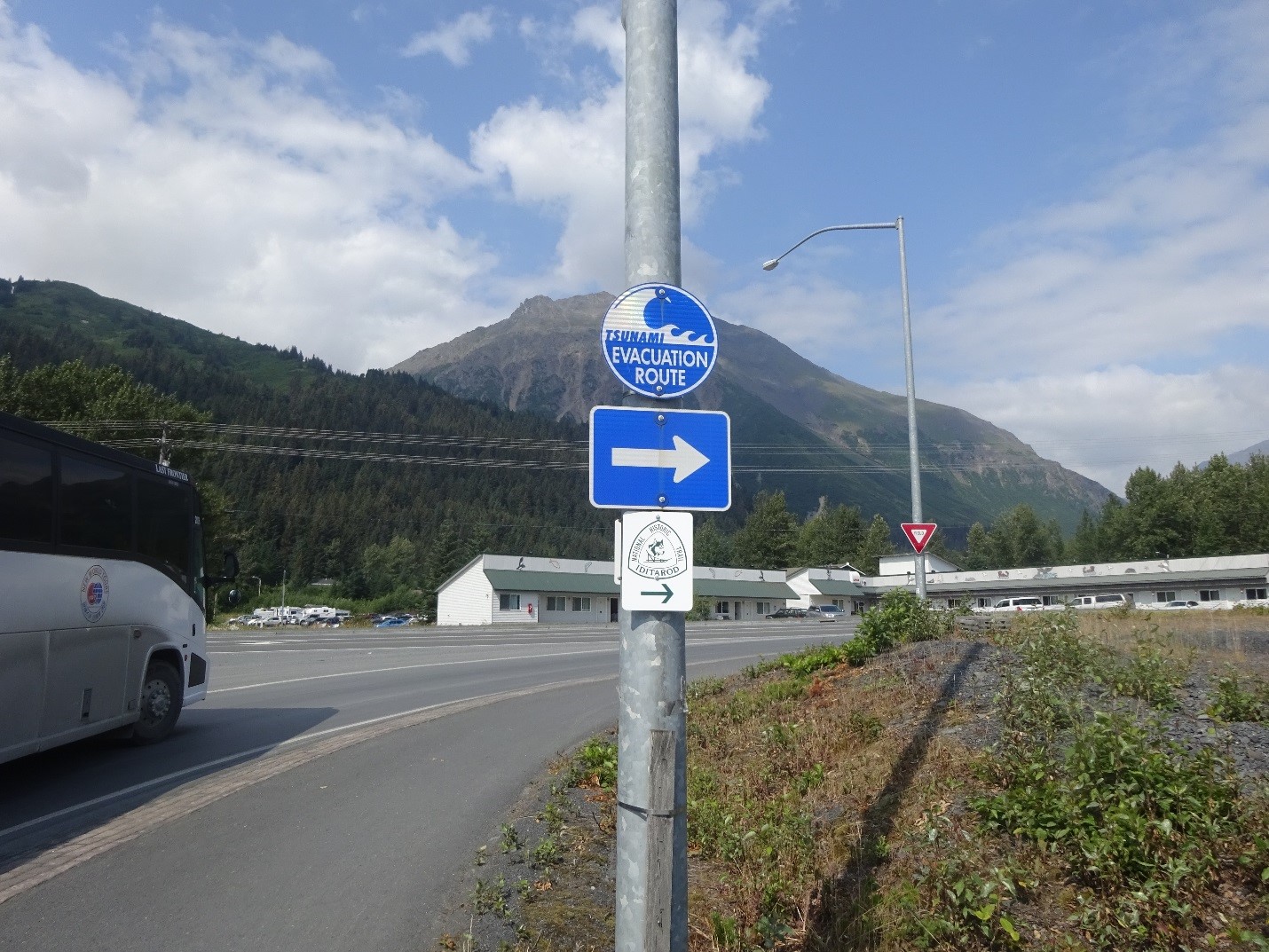 Sign on the road to the cruise terminal. you find them everywhere around Seward.

I took this photo when I went for a stroll this afternoon as it is not very often you can walk around in Seward and enjoy a real summer’s day. The bottom line of the Tsunami plan is to evacuate as quickly as possible to an area where the in rolling wave cannot reach. Climbing up the surrounding mountains would work as well for the tsunamis I suppose but might not be that great an idea for any subsequent earth quakes. There is a Tsunami warning system so the civilian community should have enough time to get out

It will all depends how well the system works and we have seen in various areas in the world that the pre warnings were not always understood and interpreted the right way and or timely. What would a cruise ship do when in the area? Get out to very deep water where the tsunami is much less of a risk, as the height and strength builds up more and more when the water gets shallower.

Tomorrow we retrace our track through the Gulf of Alaska, following the exact same track as we did yesterday. And then the day after we will be back in Glacier Bay.  Weather as smooth as a lake but maybe hazy as we had glorious sunshine today. 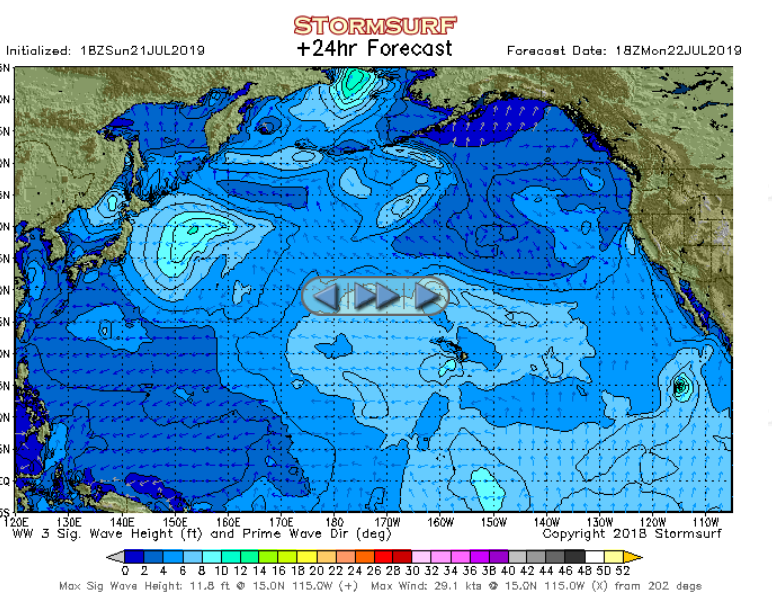 It  is high summer and the Pacific Ocean honors its name by being at peace. We sailors love blue. The darker the better and the Gulf of Alaska is  very dark for the forecast. Nice and quiet ride to Glacier Bay. (Courtesy www.Stormsurf.com)