A good day today, at least for what could have been. The skies remained overcast with a gentle breeze from the SE and that caused rain clouds drifting over but it also meant no “clouds” at seawater level so the bridge had a good view at all times and the Captain could stay in bed during the night. There was a low swell running from the South West but it was less than a meter and that is not enough to rock the boat. And even that low running swell disappeared in the course of the day, leaving us with an oily looking sea without any wind. A Vista Class ships needs about 10 feet of swell & waves to get going so 3 feet is nothing. All the guests would have liked sunshine but that comes with the inherent fog and then it is hard to sleep in the balcony cabins as the horn will be blowing every 2 minutes to warn the world that we are there. So give me overcast skies here at any time, better for a good night’s rest and although the guests might like sunshine, I do not think they are on an Alaska cruise to go sun bathing………………

We are making this part of the cruise without pilots. Last night at 1900 hrs. the American pilots left the ship at Cape Spencer as we were leaving the Alaskan Inside Passage. When we sail into Resurrection Bay tomorrow morning we will get another pilot on board to guide us to the berth. The pilots we thusfar had have no reason to stay on board as Seward is in a different pilotage area serviced by a different pilot association. Would it work to have to combine the two? I do not think so, the area would be too big for one pilot to intimately know and visit on a regular basis to keep up with all the changes in each area. In the past the South East pilots sometimes stayed on board while we went up and down as it only is for 3 days but with the number of cruise ships increasing year by year there is no gap in the system anymore. Plus quite a few of the old timers are retiring. 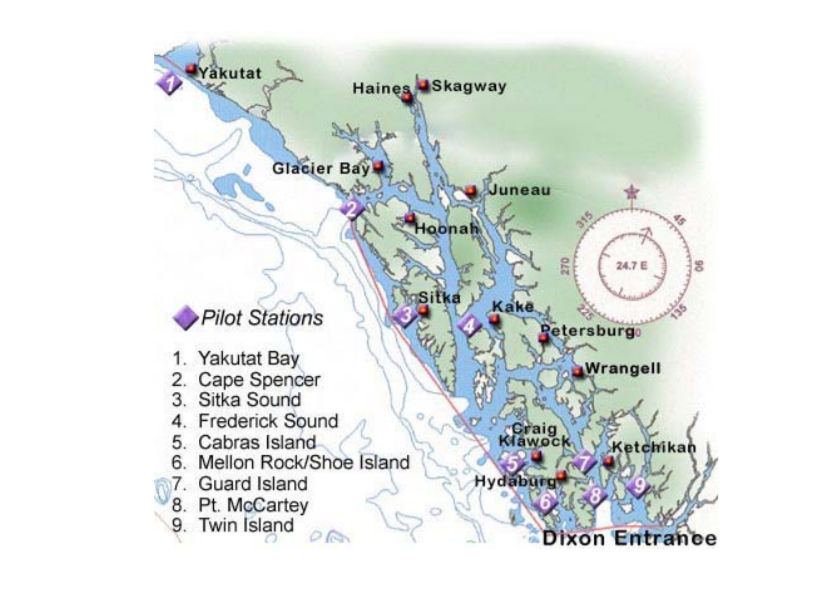 The boundaries of the South East Alaska Pilot Association and the various pilot stations for pick up and drop off. (Diagram courtesy SEAPA website)

I reported last week that the first Alaska Female pilot is retiring after 25 years and there are a few more.  This means that new pilots are needed and that is now even more urgently needed as more cruise ships are expected next year, which will increase the number of pilot days. Pilotage is in principle open to everybody who is an American Citizen and has an American Master License. You do not have to be an Alaskan and you do not have to live there. Quite a few of the pilots live somewhere south and there is one who is a ski teacher in the winter as he only pilots in the summer when it is busy. (Normally there are only 3 or 4 pilots on call in the winter at any given time to take care of the limited Cargo traffic) 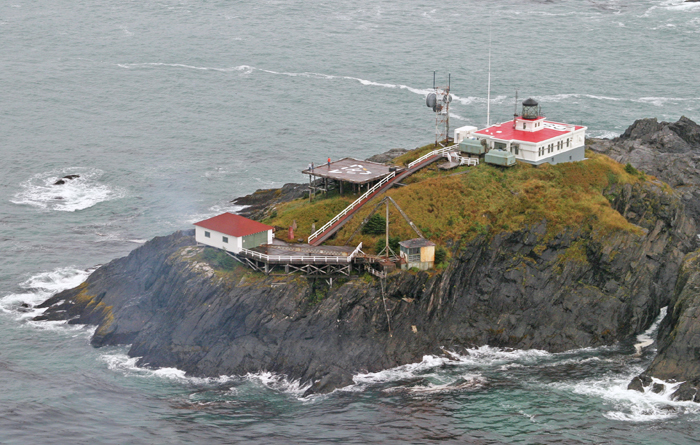 Cape Spencer Lighthouse at the entrance of Inian pass leading to Glacier Bay. In the old days a lonely place for a light house keeper, now automated and visited by helicopter. (Photo courtesty www.lighthousefriends.com)

So there are options also for our captains who have married into the USA (quite a few) to make this step if they would want to as having an American spouse normally gives the option to take American citizenship after 5 years. But the hurdle they are facing is that they have to sit for their Master licenses again, as for incomprehensible reasons the USA does not recognize European Licenses and it is the same way around. Now it would not be so difficult to pass again the exams as the skill and the knowledge is there but it would take considerable time and only then you could apply for a pilot’s job. So we had one officer going over thus far but it has been hard work for him to get through all the paperwork and I admire his dedication to his wife to make it happen. Still being an Alaskan pilot pays better than a cruise ship captain: http://seapa.com/published_rates/cruise_rate.pdf   especially if you take into account that the Norwegian Bliss has 3500+ guests on board. 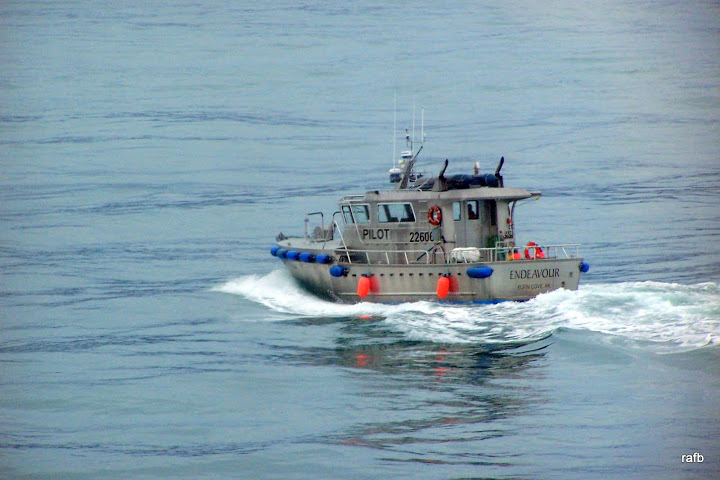 The local pilot boat at Cape Spencer. The boat is privately owned and chartered by the pilots when needed. (courtesy www.lighthousecollectorsforum.com)

Thus tomorrow we move from the SEAPA (South East Alaska Pilot Association) to the SWAPA (South West Alaska Pilot Association) and we will pick one of their pilots up at 03.30 in the morning for docking at Seward at 04.30 hrs. It should be an easy arrival as there is no wind predicted and that will help as the ship will swing on arrival and dock stern in as that is easier for the luggage. It is not easier for the Captain as docking nose in at this small pier makes much more sense but we are a cruise ship and thus an easy luggage operation is much more important than an easy arrival gig for the captain.

In Seward disembarkation will run all day with the last groups leaving after the first groups have already embarked but Seward is fairly easy on the Customs arrangements. We have already visited 3 Alaskan ports after the pre clearance in Vancouver and thus the chance that somebody is going to do something naughty in Seward must be considered very low on the probability scale.

Weather in Seward; Partly Cloudy, very little wind and temperatures around 64oF/ 18oC. So we might have some fog on arrival but with the sun coming out it should burn off in the course of the morning.