This was not a day that will go down in history as a Sunny Day in Glacier Bay. It was a Regular Day in Glacier Bay. The lower bay was fogged in all day so the bridge only saw the Rangers coming and going by boat on the radar screens and once in the upper bay it was clear but cold and overcast. I always debate with myself what is better for the guests, have an off day which is sunny and warm so it is nice to be outside or have this weather which shows Glacier Bay as it is. A rugged glacial area, untamed by humans and not habitable for those who not adapt themselves. In the past people have lived here and with that I mean the upper bay area, first of all the Indian Tribes and then also gold prospectors or those who wanted to be close to nature. Now since it is a National Park, human presence is regulated by permits and approval and those who live here, live here temporarily either for vacation or for science purposes. And we do see little tents and kayaks along the shore line. 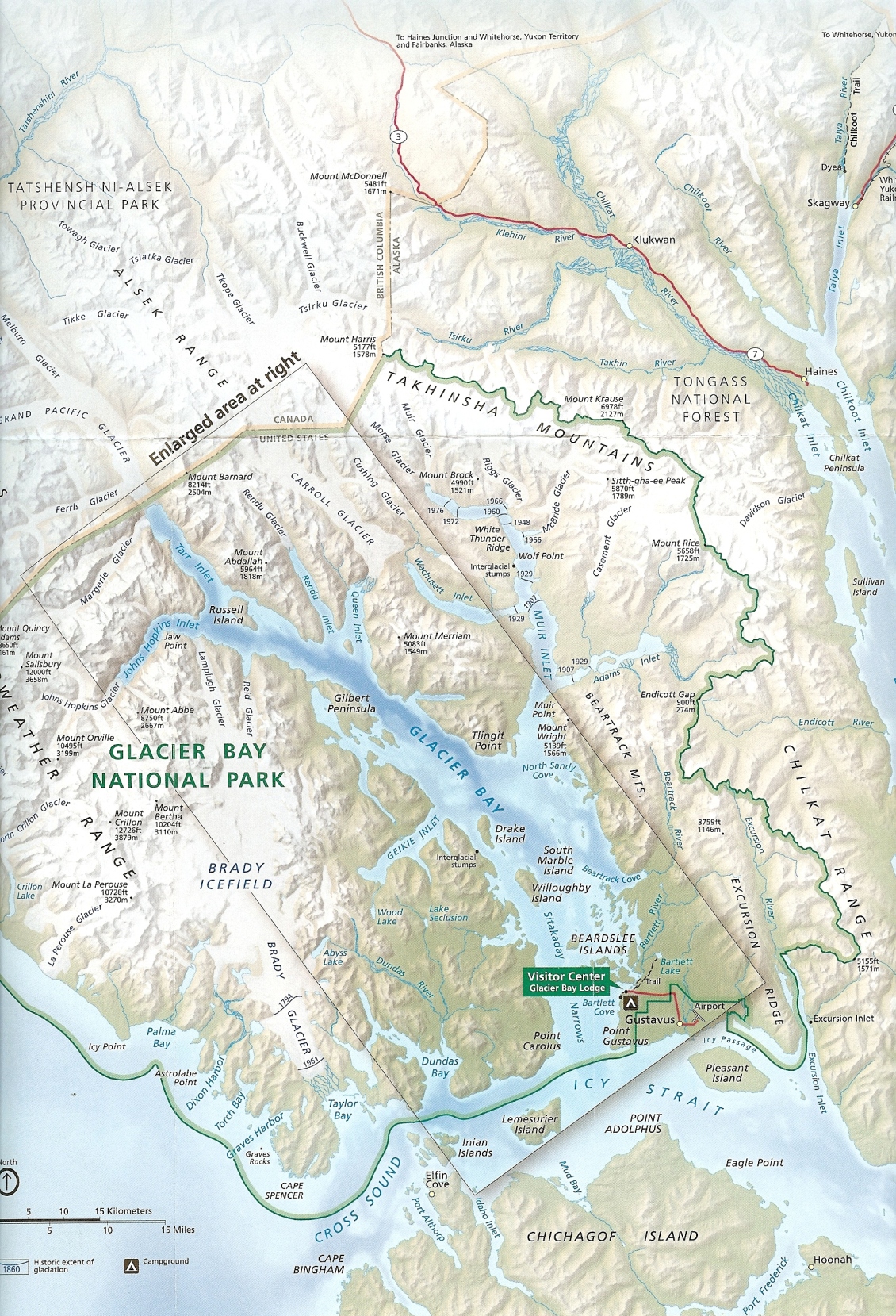 Bartlett Cove Visitors Centre at the entrance of Glacier Bay. Large ships work under a permit system, smaller boats and yachts have to check in here for permission and then receive instruction about how to behave while in the park.  It is a National Park so it is open to everybody but with respect for Nature.

Not only do they need approval from the Ranger Station in Bartlett Cove to be here but also cruise ships like us. The Rangers hand out only so many permits a year and when receiving them, the cruise company’s donate a certain amount of money to the National Park and for that we also get the Rangers on board; often accompanied by members of the local Indian Tribes who help with the interpretation about how life here once was. At the end of the season all the ships and companies are evaluated to see how they co-operated by the standards the Rangers want to see, as visiting Glacier Bay, is cultural experience, not a fun park visit. And if approved, then permits are available for the next year.  Holland America has been here since the 1970’s and have had permits year after year and thus we can offer the Glacier Bay experience year after year. Newcomers such as RCI and NCL are often not permit holders and then have to stay out and can only go to Hubbard Glacier which is not regulated by a permit system.

The contract with Glacier Bay National Park has a number of stipulations but they all pertain to ensuring that the guests will have the best cultural induction possible. This means that we have to spend at least 4 hours in the Upper Bay, there where the Glaciers are and that while the ship is there and the Rangers are making their presentations and giving their narrations, there are no other activities going on. Which means the Casino is closed and everything else in the public rooms is low key. The shops can hold a deck sale, as that is on the outside decks and because they sell warm clothing and binoculars which the guests might want to have. We have security out all day, not to arrest people but to warn them about not feeding the animals in the park. That is hard to enforce when guests are doing it from the balconies but on the open decks it works quite well. What is remarkable with this is that the security guards report that they have to deal more with adults than with children. Maybe the current generation is better educated in environmental concerns in school than the older generation but the kids are not running inside to raid the pizza stand for the birds. (Seagulls love pizza, as well as the rest that is being cooked on board) the kids might raid the pizza stand for own consumption but the security department does see a difference between the age groups. 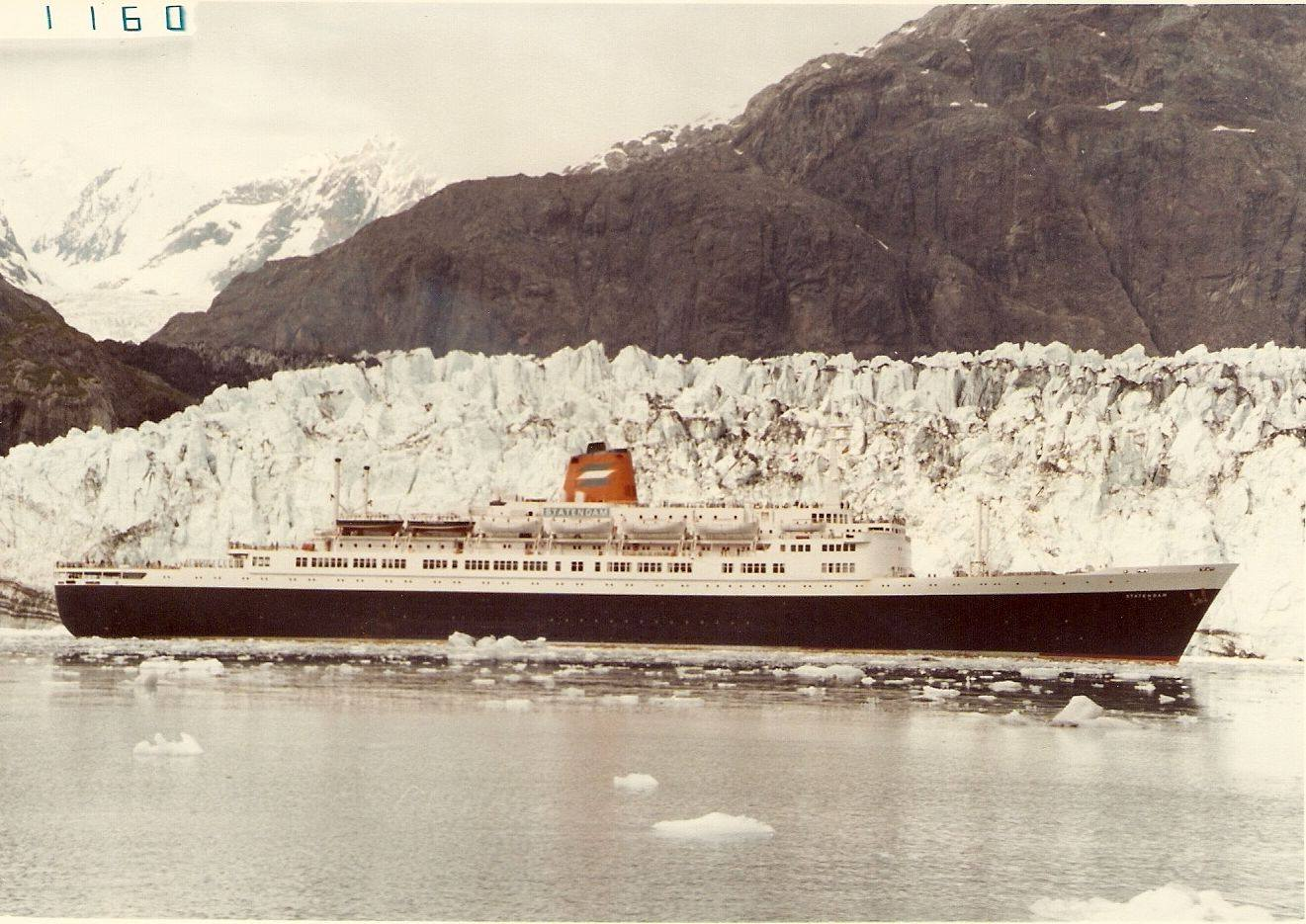 I have added an old one this time. My first year of going to Alaska in 1982 with the ss Statendam IV.  With 700 passengers she was then one of the biggest cruise ships to come into the bay.  But the routines were the same. Rangers came on board at Bartlett Cove and then we sailed up the Bay to Marjorie Glacier. (Photo courtesy Ships Photographer)

A highlight is always the calving of Marjorie Glacier but it is currently less than before. We still had some good falls but nature is forever changing and this year it is less. Maybe it will surprise us next year. Like so many glaciers Marjorie is currently retreating and is not hanging “off the edge” anymore so that the tide helps the cracks to increase and the glacier face to calve. We have now bedrock exposed that was not seen for 100’s of years and the face of the glacier now supported better which reduces the calving greatly. At the moment Hubbard is better for that but there you do not get the Glacier Bay experience as delivered by the Rangers. The Oosterdam is doing 7 day cruises to Hubbard and the Amsterdam is calling at Hubbard south bound after going up to Anchorage. The Westerdam and Noordam are both calling at Glacier Bay while sailing up and down from Seward. And finally the Eurodam and Nieuw Amsterdam are calling at Glacier Bay as part of their 7 day Vancouver cruise. So both options are available and guests can make an educated decision about what to take. Some guests come back a few times until they have sampled all the cruise options and then we are not even mentioning the variations in attaching the overland options. But a few years ago part of Hubbard was retreating and then advancing again so it will always be a surprise when we start a new season.

We have a large number of overland guests on board who will go by Coach or Train into the interior. That will happen in Seward the day after tomorrow. To get there we first have to cross the Gulf of Alaska and will start doing that after 1900 hrs. when we exit the Alaskan Inside Passage at Cape Spencer and then head west to Seward.

The weather looks good, hardly any wind and as a result flat seas. This does not mean there will not be any swell but it will not be aggravated by a strong wind blowing over it.  I cannot predict the presence of rain and or fog as  with the lack of wind, the weather systems are sort of stalled and a bit of warm air over the sea can cause some startling results in the “nothing to see” department. 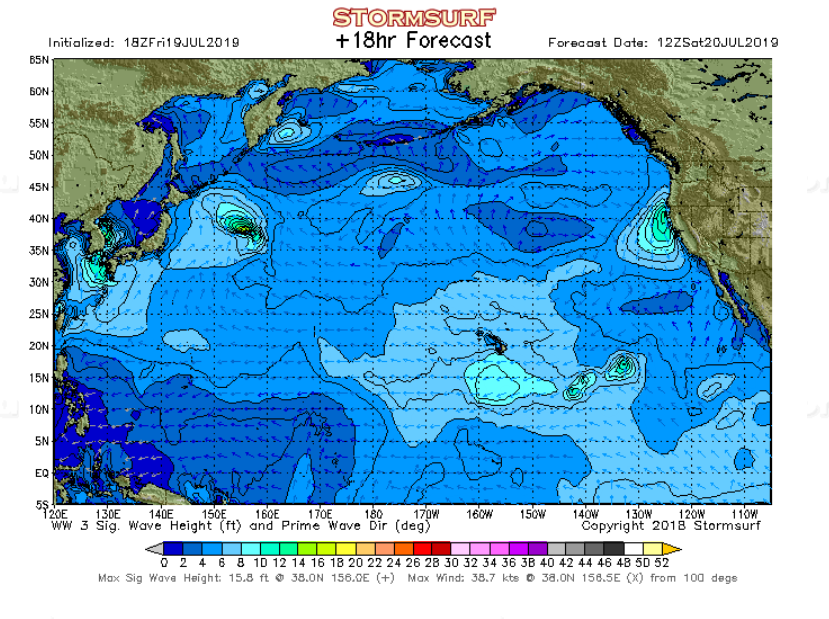