Skagway lies at the end of the Lynn Canal which is a long and narrow fjord that pierces deeply into the mountain ranges on the border of USA and Canada. As a matter of fact it is only a short drive from the port up the road to get to that border. I did that once, a number of years ago, with a friendly Alaskan pilot who had a car there and who wanted to show me a regular border crossing and not the big work that I was used to when coming into the USA or Canada to join the ships. As everybody knows everybody here the CPB officer was more than willing to have a chat as business was slow. All he processed thus far in the morning, was one RV, two cars and a Moose. The appearance of the moose was a fairly regular occurrence but most of the time the animal avoided the road and crossed the border through the greenery, today it had attempted to do so by road and that had caused some divertissement when it came to the barrier. But the CPB Officer was getting ready for the arrival of the Alaska Marine Highway ferry that arrives around 13.00 hrs. in the summer and sends ashore a whole convoy of RV’s and trucks that come up from the lower states and then go on into the interior.  Those going north are not a problem for the Americans, they let the Canadians deal with them; those coming south and are not a problem for the Canadians, they let the Americans deal with them. And by ignoring the Moose the whole world was perfectly in balance.

What was not in balance, as we found out, was the rock wall under which the Skagway Railroad dock is located where we docked today. They had a large land side fairly recently, right where normally the train stops. Steel netting had been installed as it looks like that there might be more falling down and a protective wall is under construction to stop any future slides from spilling over the rail road dock. They have also installed a covered walkway by means of containers. The funny thing is that the outgoing flow of guests goes through the containers and the returning flow of guests walk without covering. No doubt there is some deep logic behind it but to us it looked like that it was only worthwhile to protect those going to town with money in the pocket and not those coming back who had spent it all. 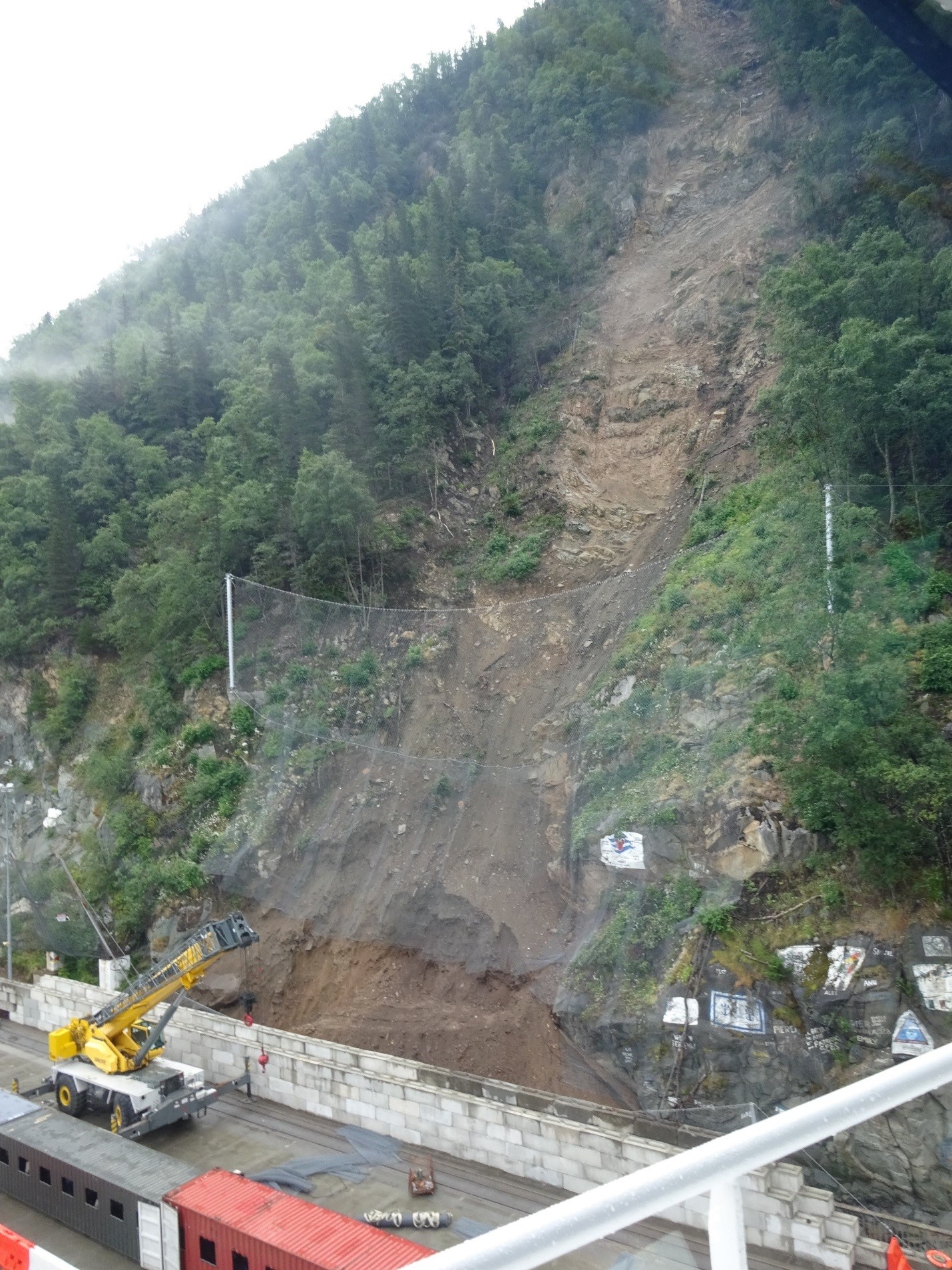 The landslide off the Skagway Railroad dock. They are building a protective wall and have netting across the slide in case more is coming down. Lower left is the makeshift covered corridor with containers put in line and “windows” cut out.  I do not know how much it will protect against a land slide but it does help with keeping dry.

We were busy today as I was throwing one of my drill specials. A mass casualty drill was on the schedule which means larger number of injured persons which had to be triaged and saved after the fire had been extinguished. For these drills I use real life people and I normally ask the Cast if they want to participate as they are the best actors we have. And indeed they produced a lot of drama while the crew doctor, as being the forward medical officer, selected those who were walking wounded (green sticker), not critical (yellow sticker), critical (red sticker) or beyond hope (Black sticker). Once assessed they are  then transported to a 2ndary triage area and from there to the ships hospital. For transport we need crew, of which we have a lot, but it needs coordination and traffic control to get them to the right location. We do not like stretchers in elevators as then we have to tilt them, so they were hand carried from deck 2 down to A deck, a long walk, but we have plenty of crew. 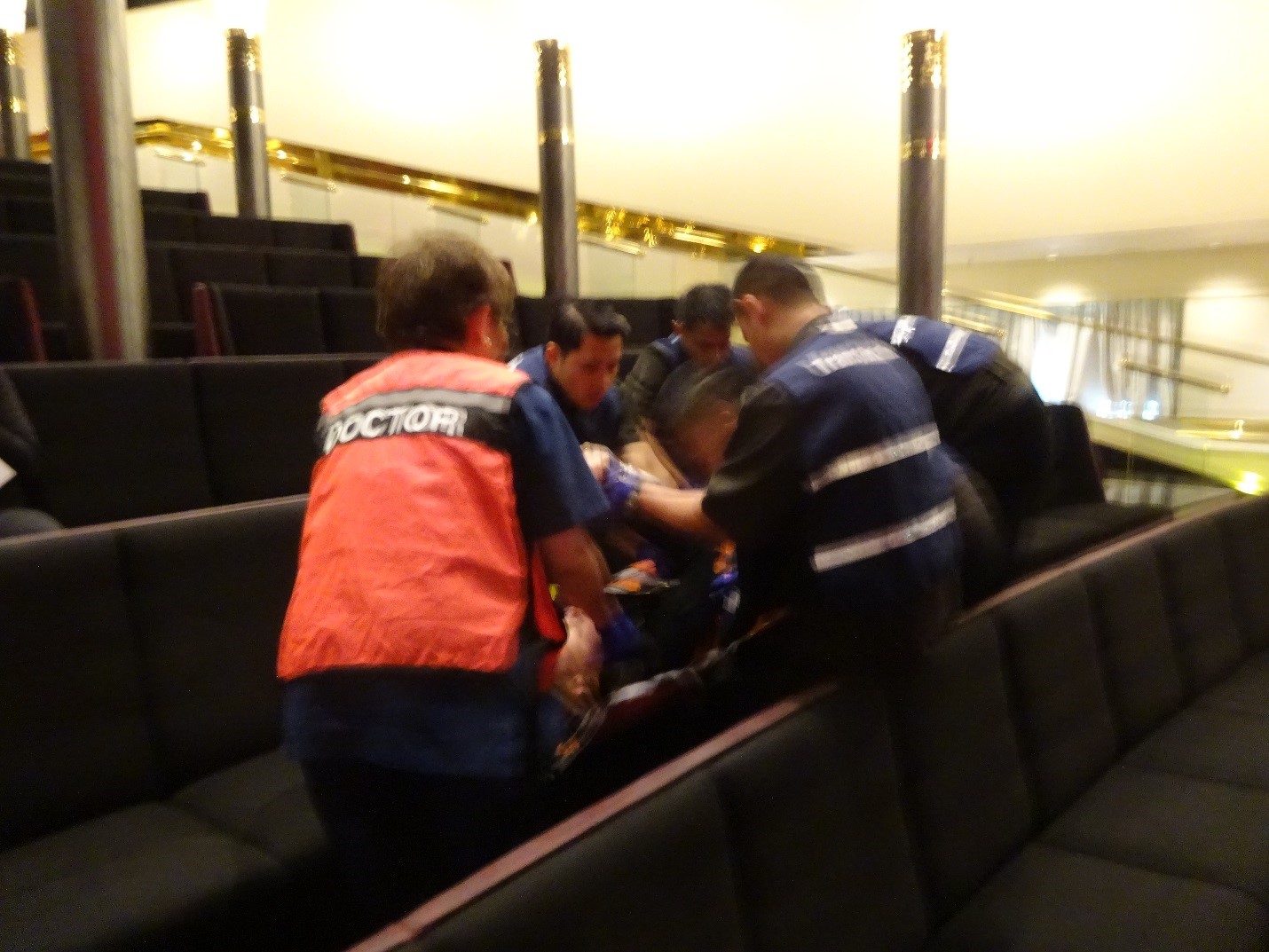 This is an action shot, hence it is slightly blurred. The Crew doctor is instructing the stretcher team of how to wrap the patient in the stretcher.

Another part of the equation is, that the area has to be made safe before medical can go in. With other words fight the fire. That is another difficult thing because what the fire team really would like to do is to drop the hose and start attending a very pretty Cast Member who is crying her/his brains out from the pain. That would of course be counter productive as it would only extend the time the fire could build up and thus the Team Commanders have to keep tight control over their troops. And once in position between the fire and the injured, stay there to protect the area and ensure that the fire does not flare up again. 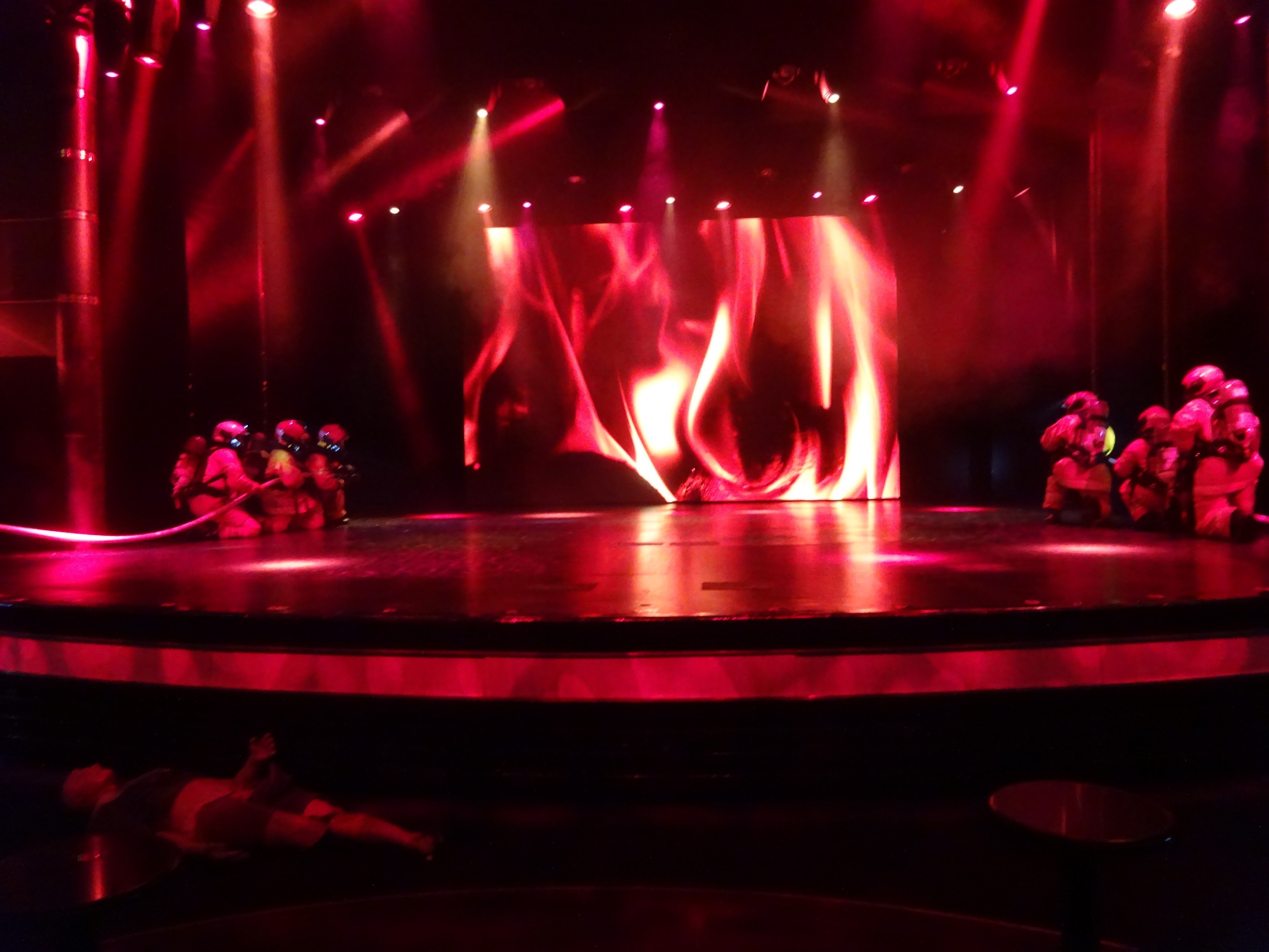 It is amazing what one can do with modern technology. Since we now have LED screens as show background in the World Stage Theater, I can really put the  lounge on fire and even regulate the height of the flames.

These drills are useful so teams are getting used to operate with larger number of crew around which creates a stressful situation, focus on their initial priorities and not  get distracted by things which are not their core focus.

We are sailing this evening at 21.00 hrs. or as soon as the Star Princess has left, as she is docked behind us. Our next port of call is Glacier Bay and for that purpose we have to sail all the way down the Lynn Canal again, around the corner through Icy Strait, and then backup into Glacier Bay. It would have been so handy if Mother Nature would have put a cross fjord in, then we could have done this in an hour. But then Glacier Bay would not have been the Glacier Bay we know.

Weather for the tomorrow: Overcast with low hanging clouds and maybe some drizzle. Temperatures in the low 60’s (16-17oC) in the Lower Bay and a lot colder in the Upper Bay where the Glaciers are. 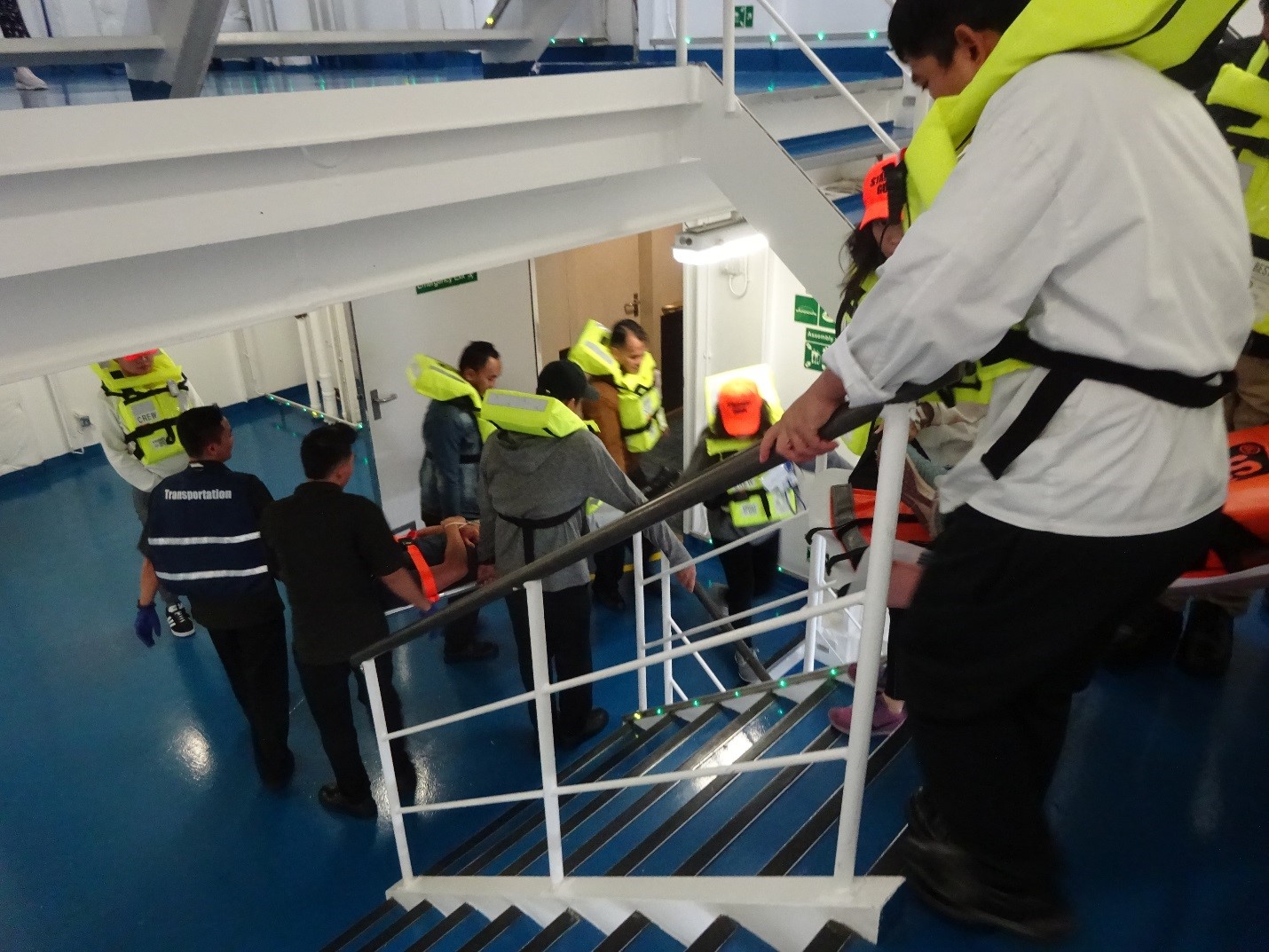 The cast members acting as casualties were very patient while the stretcher teams carried them all the way down  two decks and then along the service corridor to the ships hospital.