The forecast lived up to the weather or vice versa and we are having a very quiet day in the Gulf. Last night the bridge team paid the price for that sunny Seward day and had to find its way through dense fog for a while. But weather systems are local and now we are back in the system that dominated the weather we had before coming to Seward. Overcast with rain in the distance. Also for the coming days showers have been predicted but with percentages under 50% and that is enough to make us happy.  50% and over means it will rain but not all the time, 50% and under means it might rain but not necessarily. All reasons to be positive while we are heading back towards Vancouver.

With the first sea day of the cruise we see the regular pattern with our joining guests. Alaska always means a large number of first time cruisers on board. Their draw is not the cruise as such but visiting Alaska and combining that with a cruise or with a cruise only. For the company & ship an excellent chance to show the Holland America hospitality and service with the hope that those new to cruising will start to come back. One would have thought that the reluctance to make a cruise would be gone by now; we lost our fur coat image long time ago and the cruise industry is booming. But there are still a lot of people out there who have 2nd thoughts if they should spend their hard earned money on something that fancy. And with a cruise to Alaska they are hedging their bets. If the cruise does not work out, they still had their Alaska adventure, if the cruise works out, so much the better as a bonus.

For an old timer like me you see funny patterns. Yesterday on embarkation day, I went for lunch at 11.30 as soon as the Lido opens. I normally do this so I do not take up space when the rush starts around noon time. (End of lectures etc.) So I moved to my favorite food station, Far Eastern Lands, and there was a whole long line of guests. Very unusual. After a minute or two I realized that they were thinking that this was the only food outlet open; as this food station is in the curve of the Lido Island and you cannot see the rest of the outlets. This group had just marched on board from the coach and they saw food and there they stopped. It was left up to me to give them a subtle hint about what else was there around the corner. I have never seen a crowd disperse so quickly. I made the serving cook a very happy man. That is why I always think, if there are riots, do not send in the police, send in a few food trucks, it should work much better. 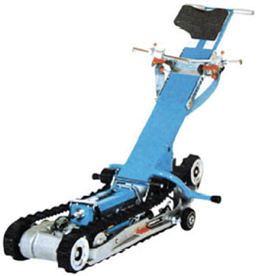 Behind the scenes the regular day went on and I spent the morning teaching the Housekeeping Stewards of how to work a Stair Climber. Normally this is done by one of the junior officers as it is quite simple but as they are watch keeping officers, their time is limited and they do all 70 of them in one go, and then only those in the front row will see it all. So I decided to run 20 minute sessions for small groups going deck by deck. I set my own schedule so with the training officer we made 2 half days of 20 minute training sessions to get them through in these small groups.

A Stair Climber is a track wheeled machine which can carry a wheel chair up and down the stairs. We should never need it as 4 of our elevators are on emergency power and would work during a major emergency. But Holland America being the company that it is, we have a backup for a backup by means of this machine. The Stair Climber works on a battery and you hook the wheel chair onto the steering column and then guide it up or down the stairs. Not difficult at all; the reason that we need to train is to overcome the fear factor of the crew to be willing to use it. At the moment I am training Captain Colm Ryan to become the 2nd Fleet Master and he was promoted to being the guinea pig sitting in the chair. So now apart from operating the machine, there was a genuine captain sitting in it. Talk about ensuring full focus on the training. 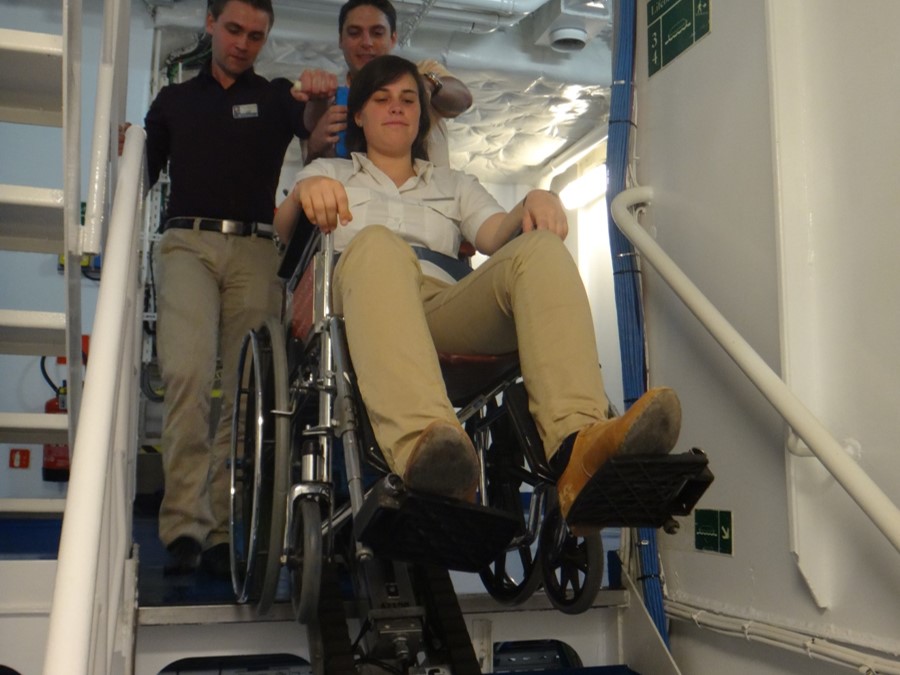 This is an action shot where one of my school classes where having a go at it.

Apart from this contraption there is also a Stair Descender. This machine is not motorized but works on gravity. It cannot hook in a wheelchair but the person has to be lifted onto the chair, descend down the stairs and then lifted back into the wheel chair. Each emergency staircase has one of these and they are all located on the higher decks. Cumbersome, yes, but in an emergency it might save the life of somebody with Special Needs and thus a good reason to have them. 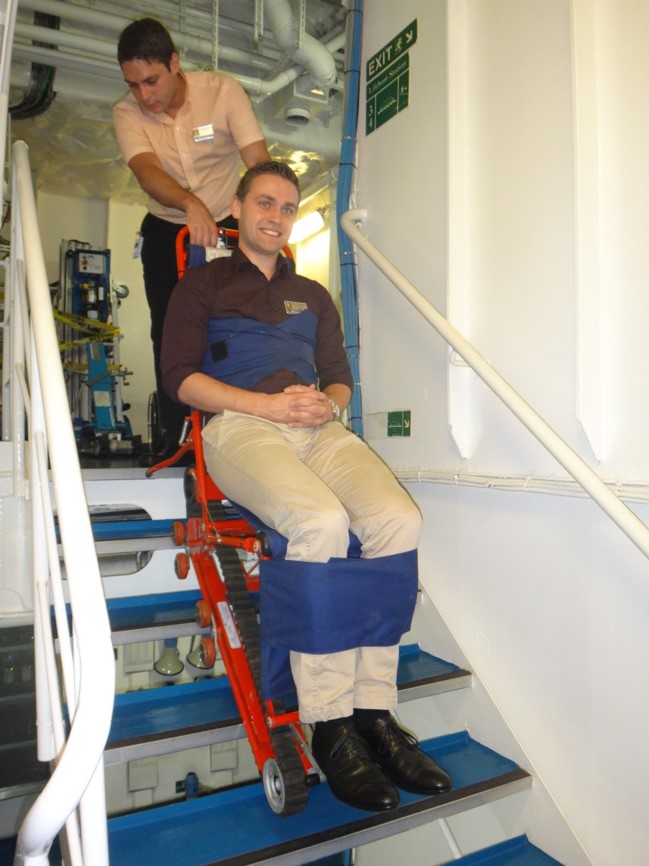 The Descender only version but here the electric motor has been replaced by gravity.

Tomorrow around 06.30 we will embark the two American pilots for the Alaskan Inside Passage at Cape Spencer and then sail for Bartlett Cove to collect the Rangers. We are on the late schedule so we will arrive at Marjorie Glacier around noon time, just when the Eurodam is leaving. Only this time the Eurodam is not there as she is visiting Tracy Arm instead. She has a full ship charter and charterers can decide on their own schedules. So they must have preferred Tracy Arm and Endicott over Glacier Bay. Maybe they had a charter going there in the past already. We will keep to the same routine as the Rangers have to plan us in as well. The captain might just decide to go a bit faster up the Bay.

Weather for Glacier Bay. Overcast with a 50% of rain in the lower bay and temperatures of around 16oC / 61oF. What we will get in the upper bay is anybody’s guess as here the Glaciers create a sort of micro climate & weather and the lower temperatures can affect the whole equation. 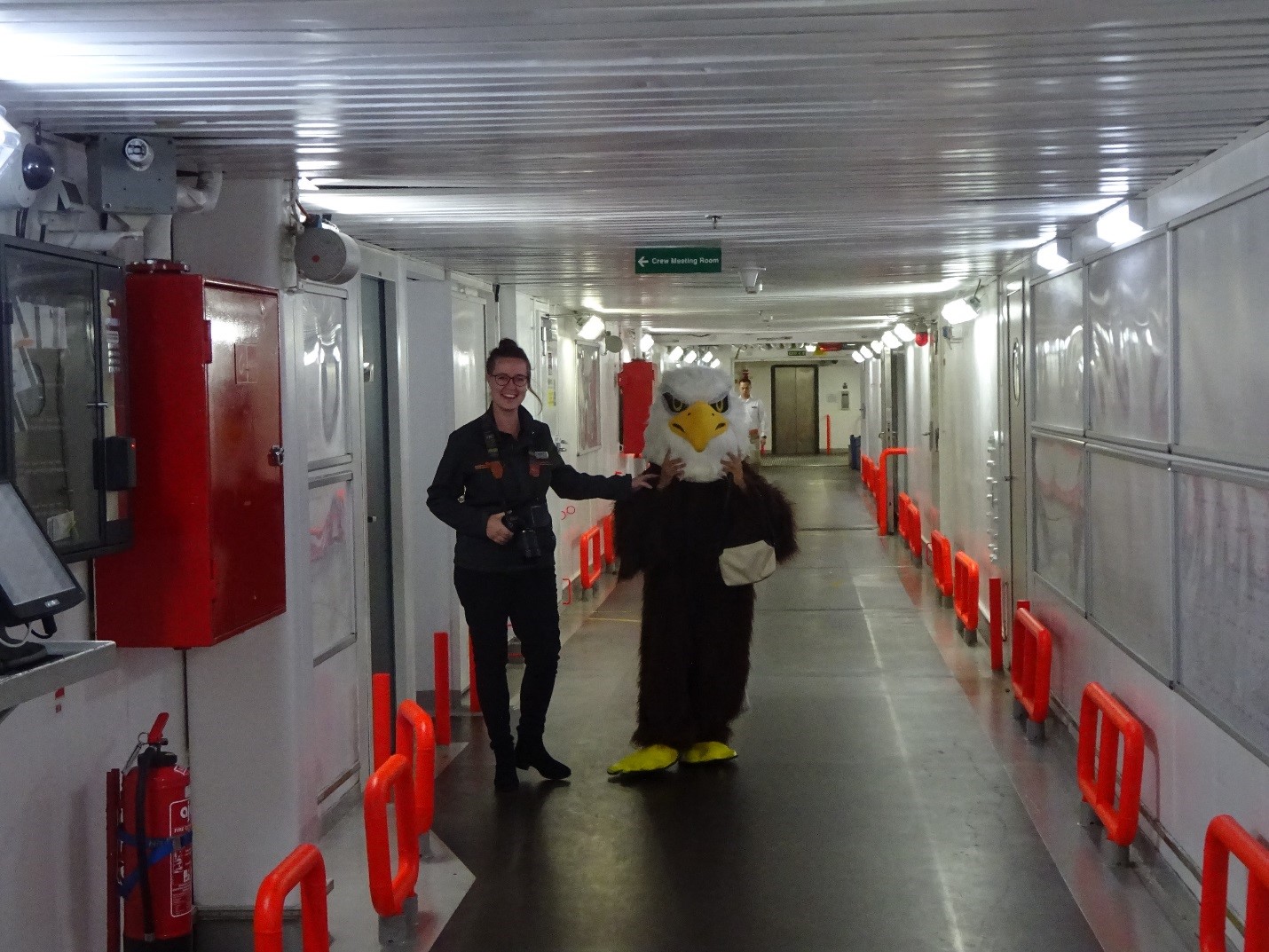 Never be amazed what you see on a cruise ship. All in a days work to see an eagle walking by. Here the photography department in ships service corridor. The passage way on Deck A where all the crew and service transport happens. the red /orange  bumpers are there to protect the bulkheads when we get “less proficient” long shore men on board during change over day.