Same as St. Thomas (Bluebeards Castle,) the island of Antigua was for a long time a Pirates strong hold. Also blessed with a deep and sheltered Bay it was a safe haven for many of them until the worlds powers had enough of it and cleaned them all out. Then the bays, inlands and other sheltered areas were taken over by the Worlds Navy’s who controlled their strategic assets. Dutch, French, and English they all had a few islands under control and those served as a springboard to assert their claims in the area. A name such as Nelson’s dockyard still reminds us of those days. Nelson and the dockyard are long time gone and now the rich, super rich and sometimes not so rich can park their yachts in that sheltered corner of the island. The size of their bank accounts identified by the lengths of their yachts. 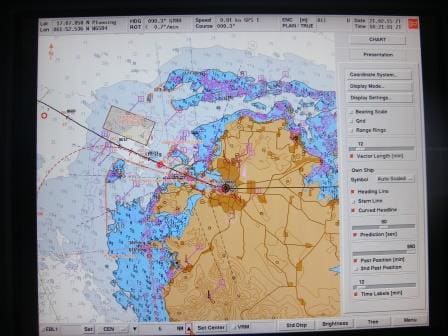 A scan of the Chart on the Radar. A long and narrow channel leads into a very shallow Bay.

The main bay with St. Johns as the capital of Antigua is located on the North West side of the island, completely sheltered from the Trade Winds. There is only trouble here if a frontal system comes in from the other – North West or West – side. Today the wind was regular and the Ryndam could sail in without any hindrance. The Braemar (Fred Olsen Lines) was already in. We docked at the Northside of the Heritage Pier and were later joined by the Costa Mediterannea who docked at the other side. The Heritage Pier is the pier that is closest to the down town area and the Ryndam basically docked in the middle of the town.

Same as is the case with San Juan, St Johns harbor is prone to silting up and when coming in we saw a dredger busily removing silt from the area which is called Rat Island. This used to be cruise terminal in the old days before the down town piers were developed and the bay dredged out. Now this is the main cargo/ container terminal. The dredger was called the Shoreway and is owned/operated by Royal Bos Kalis which is a Dutch company but the dredger was flying the Cyprus flag and that was a bit of a disappointment.  But the off- shore and dredging industry is really cut-throat and thus having subsidiaries all over the world does make sense.

A group of people on board which really fascinates me are the ships photographers or the Image Creators as they are called nowadays. If you talk about a group of people who have to constantly self-motivate and re-motivate themselves, then that is the groups. Seldom a compliment from the guests but a lot of indifference; and sometimes worse.   People do not want their photo taken, and if they don’t get one then it is not good either. If they like the photo then the prices are too high. Etc. Etc. It does take a very positive attitude to get through all that.  They only feature which is really liked is the Black and White studio which clever photo shooting can turn everybody into a fashion model. 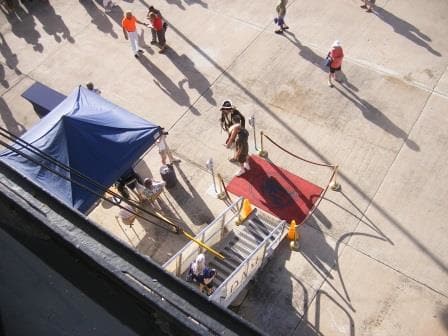 One of the standard features in the photographers’ life is the Gangway Shoot.  Every port a different theme, sailor boy, pirate, Spanish lady, something done in relation to the port.  Today it was a Pirate theme and thus a photographer was standing at the gangway all dressed up in the hot weather. Again not something for the faint hearted. Cursed by Security as they are blocking the gangway flow, pushed aside by the guests who are in a hurry to get to their tours or to the shops. You wonder if it is all worthwhile to do it. But it must be, as every ship has a photo department and when looking to the new ships, the area allocated to them only seems to grow.

Leaving St. Johns is also an interesting feat as it just fits. The turning basin has to be constantly dredged as well and it is not very large. For the Ryndam there is sufficient room but for the larger ships such as the Costa M. next door it is a very tight maneuver with only a few feet to spare.

Once outside the ship set sail for Castries St. Lucia. An almost straight southerly course. We will be there tomorrow arriving around 0700 hrs. and we will be followed by the Braemar. Tomorrow will be a two port call as in the afternoon the ship will proceed to Soufriere Bay to pick up the overland tour which leaves from Castries in the morning. Additional benefit is the scenic cruising that it involves around the Pietons.

The weather is looking good, although there is a chance of one or two torrential downpours courtesy of a weather front that lingers over the N.E Caribbean and SW Atlantic.