From San Juan to Charlotte Amalie is only a short hop. The islands of Puerto Rico and St. Thomas are neighbors. Only San Juan is located at the north side of Puerto Rico and Charlotte Amalie is located at the south side of the Island. Thus during the night the ship sailed East North of P.R, then dives through the hole and continues sailing east south of St. Thomas.  We can be always on time; the question is just what time do we arrive? Although the Captain can indicate when he wants to arrive, the exact time is decided by the Port Authorities, with the eye on avoiding Traffic Jams. St. Thomas is so popular with cruise ships that the docks are nearly full everyday (except Sunday’s) and all the cruise ships want to arrive at nearly the same time.

Since the mists of time; cruise ships have come to Charlotte Amalie. First as an excursion to a quaint island in the Caribbean, but has it had a sheltered bay so good for the cruise ships they kept coming.  The Germans already had a dedicated little cruise ship calling there, the Prinzessin Victoria Luise coming here in 1900. Holland America showed up for the first time in 1934 with the Rotterdam (IV).  One of captains from those days; Captain Barendse, was so love with the island that he bought a piece of land there. Including a servant whose duty it was to raise the – HAL – flag each time his ship would come to port. 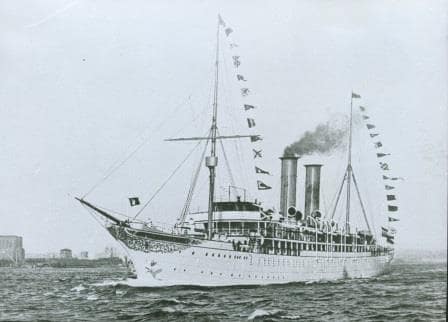 One of the earliest ships built as a cruise only vessel. The Prinzessin Victoria Luise from 1899

The West Indian Dock Company built a dock in the bay on the sheltered side and the rest is history. The Ocean Liners of the North Atlantic went cruising in the 60’s and 70’s and were then replaced step by step by dedicated cruise ships, and then the increase in size came. I remember that around Christmas 1981 (I was 4th. officer on the Statendam IV) we were with 11 cruise ships in Charlotte Amalie, putting ashore about 5500 guests. Four ships alongside the berth. Two in the inner harbor, one on the engines and 4 outside the entrance.

In 2002 I was there again with the Maasdam (V) and now we had 5 cruise ships in port, putting ashore close to 12000 guests. Three ships at the dock, one in the inner harbor and one at the outer anchorage. Of course it did not stop here: the days of the mega liner arrived. The dock could barely hold of two ships and was even extended to make that possible.

To deal with this overflow the Submarine Base in Crown Bay was developed. In the 90’s the Navy closed the base and the dock was modified and extended with a shopping village built at the entrance.  So those with the money but not the stamina to go to down town could still spend and support the economy.  Holland America was one of the companies who opted for Crown Bay, having to make the decision between a quieter cruise experience or maximum shopping exposure. There is still shopping galore in Crown Bay, but it is not as hectic as in downtown or at Havensight. 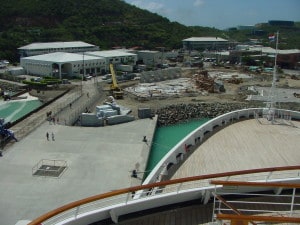 From the bridge of the Maasdam in 2002. Crown Bay cruise centre under construction.

And thus that is where the Ryndam headed this morning; into Crown Bay, which is really more of a natural channel around an island. But the channel has three names: West Gregory, the entrance/exit to the West; and East Gregory the entrance exit to the East.

Both come together in Crown Bay. The routine is when docking nose in, you normally come in through East Gregory as you can aim straight for the dock. Then you leave via West Gregory. If you want to dock stern in, you come in via West Gregory, aim the bow towards East Gregory and then go astern into position.  You can do it the other way as well but it means a lot more of maneuvering and fighting wind and current.

So today we docked nose in on the north side of the dock and thus entered via East Gregory. Next to us was the Royal Princess who was docked nose out. At the Havensight dock there were two other mega liners and together we sent approx. 10,000 happy shoppers ashore.

I remember the good days when the town was already a shopper’s paradise but with a lot of diversification and interspersed with lots of restaurants and liquor stores. Now the very large majority of the stores are Jewelry stores.

But it was very nice weather and everybody should have had a grand day. Whether they bought jewelry or not. By 5 pm. It was time to sail and we followed the Royal Princess out and headed towards Antigua. We will be docking around 7 am. Tomorrow morning.  And will be in good company with the Braemar and the Costa Mediterranea…………………. and more jewelry stores of course.