San Juan is one of most impressive ports to sail in from the whole Caribbean. Morro Castle is towering high over the entrance and the ships sail fairly close to the shore, all the way to docks.  It can also be a challenging port to get into. 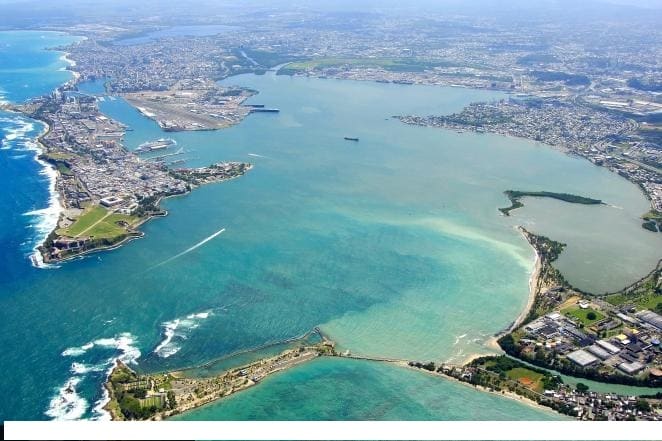 From the air the entrance looks quite wide. It is very shallow with only a dredged channel providing sufficient depth. Luckily for the guests this channel runs quite close to Morro Castle.

The entrance to the West of Morro Castle is almost perpendicular onto the Easterly Trade winds; running almost north – south. The more wind, the more drift you will have while entering the channel and the channel is not that wide.   You can reduce the drift by going faster and that is what most cruise ships are doing under windy circumstances. When it is windy the pilot stays inside as the chop (read waves and swell hitting the shallow water area) near the sea buoy can make it very dangerous for the pilot when transferring from the pilot boat to the ship.

Then the captain can sail in by keeping speed and only has to start slowing down once he is in the lee of Morro Castle. Just inside, the channel makes a sharp turn to the right and that is where the pilot boards in wobbly weather. There also ends the wind & drift issue as the wind is now coming onto the nose and is reduced as well due to the lee of the land.

It only becomes an issue again once the docking procedure starts. Once again the wind becomes perpendicular onto the ships course as the docks are all lined up south to north. Thus with a lot of wind you can either drift too fast onto the dock on the windward side or drift away from the dock on the leeward side of the dock.  If there is too much wind for the thrusters, then there are tugboats. There is a plan b.

For us, today, there was not so much wind but we also had a perfect windbreaker in case there had been. The Carnival Splendor was towering high above us, located on Dock Four East and created a very nice lee which was appreciated by all.  I do not particularly like very large ships, but they come in handy sometimes. The Ryndam could nestle happily alongside dock Four West.

And thus we arrived and were happily alongside by noon time. The weather front was there but only its tail. It had lifted away from a forecasted track over Puerto Rico and now most of it was angled towards the Dominican Republic and San Juan saw only a few showers in the distance and strangely fluctuating winds in the harbor. Going from east to south and then to north in a bit of an irregular pattern. Only by 16.00 hrs. was the wind standard direction: East again.

Apart from trainings in the morning, I took the sailors down into the water to learn the basics of tender driving. Today they discovered the delights of maneuvering a Tender which lays high on the water and is pushed all over the place by the wind. Thus the most important lesson today was where is the wind coming from and where will it try to push my tender to.  For that purpose I train in steps.

Step 1: before you move the tender, check the wind direction.

Step 2:  when the tender is let loose from the fall blocks or from the gangway rope, watch how the tender starts to move by itself. Where does it drift to?

Step 3: Whichever way the wind/ current is pushing the tender, is the way you are going. If you enhance that movement is goes a lot better than when you fight it.  So if the stern gets pushed off by the wind use the correct engine to increase that momentum. Does the bow gets pushed off, then do the same with the other engine to increase that momentum.

And that makes it possible that suddenly you can maneuver a two engine tender; ……. with one engine.

Our nice lee side, the Carnival Splendor, left at 16.00 hrs. amid much thrusting to get the ship off the dock against the strong winds. The Ryndam had to put her thrusters on line and stop all gangway traffic to counteract all that power of the Splendor and to keep the gangway safe.

The Ryndam sailed in the late evening, giving the crew a chance to go ashore for a few hours as well. By that time the wind had died down completely which is normal for San Juan as the Trade Wind is mainly caused by differentiations in air pressure caused by the warming up of water areas. The sun gone, the water cools down slowly, reduces the imbalance in air pressure and eventually the wind dies down as well. 20 knots on arrival reduced to 6 knots on departure.

Tomorrow we are in St. Thomas and will be docking at the Crown Bay dock. Weather should be nice and not too breezy.