Today was part at sea and part docked as we have an overnight. Thus we try to wriggle it as much as possible to sail the scenic bits by daylight. That brought us at 05.30 at the entrance to the Dardanelles. You cannot be much later otherwise you arrive late in Istanbul. But it was getting twilight already and thus there were things to be seen. Cruising is not only about lazing about, it is also about culture and for that you will have to get out of bed early sometimes. The Location Guide had to get up as well as there was a narration by him from 05.30 onwards. We had good visibility and thus everything was clearly visible from the Monuments to the Villages dotting the green hill sides.  I woke up at the more decent time of 06.30 and by the time I made it to the Lido we were just going around the major bend in the passage. The only one where you cannot see around the corner and the radar does not help either as there is a hillside which blocks the radar from detecting ships. But there is a good Vessel Traffic Control which keeps the pilot updated and that avoids us from running into nasty surprises. 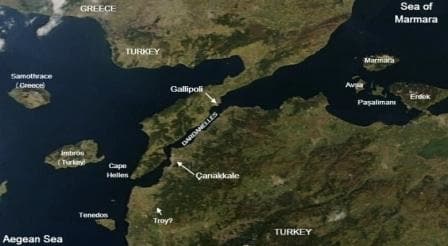 Air photo from the Dardanelles with the sharp bend clearly visible.

This bend is what fascinates me most about the whole Dardanelles. On each side there is a fortress and in the good old days, long time ago, they had a chain in place all the way across. The chain could be raised or lowered depending on whether foe or friend came by or more often who had paid the river tax and who had not. In those days the sailing vessels were relatively small and thus a regular thick chain would do the trick. Every time I pass by here I wonder, how thick a chain would be needed to bring the modern day vessels to a standstill and pay their dues? With the Koningsdam putting 40,000 hp. in the water means it would have to be a very thick chain. 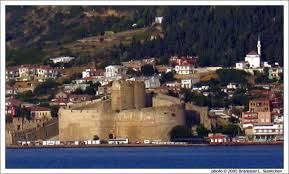 The Northside Fortress in the Bend.

Pilotage is compulsory for this area and he (I have not seen any Female Turkish pilots yet) boards just before Cenekale. This is also the location where Customs and Immigration boards, but as we were coming from Kusidasi we were already cleared there. Pilotage ends at Gelibolu or Gallipoli where the Dardanelles enter the Sea of Marmara. From there the ships can sail by themselves until they reach the beginning of the Bosporus where a pilot will either bring the ship to a dock in Istanbul or will take it through to the Black Sea. 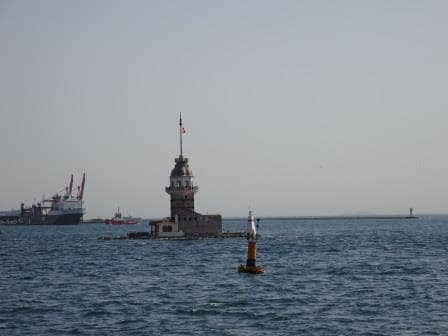 Famous Landmark when sailing in. James Bond sailed a Submarine under it, we sailed around it. 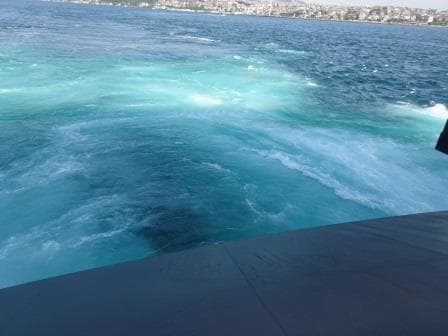 This is what the water looks like if you put the Azi pods full astern to stop in position after the turn. I do not think a iron chain would stand any chance against that.

Thus the best option is then, make the turn, stop about a 100 meters off the dock, keep the stern in the wind and watch. Watch what current and wind are doing with the ship. Once that is known you can bring the ship under an angle which balances the wind and current influence and then go slowly sideways to the dock. Slowly, so you can keep adjusting for the constant varying influence of wind and current.

Sailors paying out the ropes.

That takes a little bit of time but it makes docking safe. And thus we did not completely make our target of being fully docked at 16.00 hrs. but it took 10 minutes extra. But as the first shuttle bus to the Grand bazaar was only going at 16.30 hrs. nobody was really inconvenienced. We have shuttle buses going as the local authorities are upgrading all the docks. As a result no more than two cruise ships can currently dock here at the same time, but as the season has not really started here, there were no issues as we were the only ship in port. 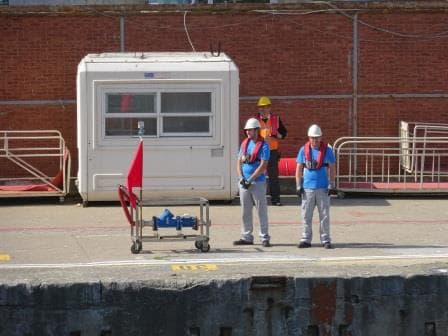 The ropes go to these gentlemen, who are also the Watermen for connecting the fresh water hoses. The red flag indicates the location where the stern should stop.

I spent arrival on the mooring deck aft checking on the proficiency of the mooring team there and to see if more support was needed to get them into the routine of the ship. Hence the photos.

And thus we will stay overnight and then have a full day tomorrow. I am not going ashore here as I am teaching the crew at the moment how to handle watertight doors properly. As these doors can be lethal when not correctly used I am going through the training with small groups so I can ensure everybody’s full focus. But I feel as a sort of gramophone who plays the same tune every hour. Most crew is going off tonight and will then have time tomorrow either in the morning or in the afternoon.