Today we are in Kusadasi which is a place with a lot to offer. For the sailor, it has two nice piers giving four good docks, for the historian more than 2000 years of culture and for those into shopping; Leather Goods and Jewelry can be had at very good prices. The latter depends a little bit on your negotiating skills but my Lord and Master Lesley has proven in the past that it can be done with just a little bit of persistence. It still cost me an arm and a leg but as we “saved money by spending it” there was not much I could say and we now have quite an extensive leather jacket collection at home. Today I saw several gentlemen coming back with the same thought on their minds……… and we still have two days in Istanbul to go with the Bazar just on the door step.

We are now in a region which is mind boggling if you want to keep track of which island belongs to whom. Either to Turkey or to Greece. Greece was for a certain period occupied by Turkey (and they are still not very good friends) and after the split some Islands became part of Greece while not more being more  than a stones throw away from Turkey. And that is not an exaggeration. Just to the South West of here lays the Greek island of Samos with the town of Pythagorion. Holland America used to call there and it is similar to Katakolon but less touristy. The ships tenders dock almost inside the Taverna’s on the Boulevard. Great place for an evening stay.  If you go to the East of the island there is a narrow passage which can be used as a sort of short cut to Kusadasi.  In that passage is a rock and that rock is Turkish while Samos is Greek and the far side of the passage is Turkish as well. Here you can literally throw a stone across the water and hit Turkey. What is so strange about this is, is Turkey is a stones throw away from Greek Samos but Samos itself is at least 10 miles away from mainland Greece. Hence it being so easy for all these refugees to hop from Turkey to Greece and into the common market. 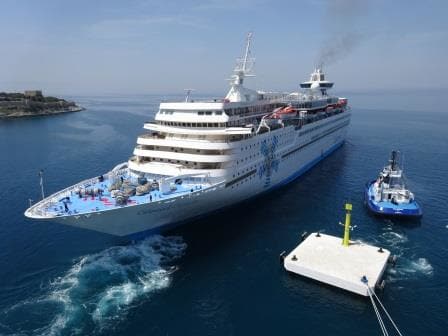 Luckily cruise ships are normally not involved in politics and we can thus peacefully hop around the various islands regards less of who owns them. We were not alone in the port today, there was another cruise ship. The Celestial Olympia owned by Greek Interests. Normally I do not write very much about ships of other companies but here I make an exception: This ship was originally the Song of America which came in service in 1984. With 40,000 tons and 2000 beds she was considered the first “big” cruise ship out there. You can say this ship’s success gave the push to all the mega liners nowadays out there. Eventually she was a victim of her own success and then sailed budget companies in the European Market. First as Sun Bird in 1998 for a company called Air tours, then became part of the Tui fleet as Thomson Destiny and after 2012 became the Louis Olympia. Then Louis cruises created a new company called Celestial Cruises and here she is as the Celestial Olympia. They must sail with a great variation of clientele on board as the departure announcement came in Greek, English, Spanish and what I thought was Japanese.  It lasted for quite a while; directly followed by more noise in the means of a pool party. 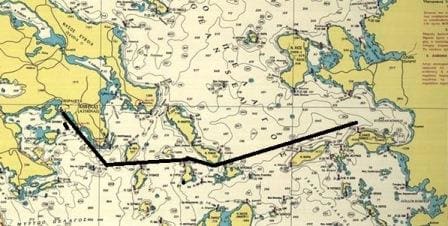 Meandering our way through the islands and the traffic to Kusidasi in Turkey.

We arrived at Kusadasi by going east from Athens.  All ships coming and going to and from the East bend around the south point of the main land somewhere and can choose various passages through the islands, but sail through an area with traffic coming through Steno Kaos. Named after the island next to it, the island which gave us the word Chaos and the local traffic is sometimes not unlike it. It is seems that seamanship for small, Greek, Turkish and Russian ships, mainly consists out of doing your own thing and hopefully your neighbor will not mind. Once past everybody can then pick their preferred route with the many islands acting as impromptu traffic blocks. It can be very hectic here but through all the years I only had issues here once, when the Greek navy decided to exercise right in the middle of the steamer route.  In the end they made room for us but it was interesting as they did not communicate and we on the bridge had no clue what they would do next. But also this cruise the Navigation team had an interesting night.

From Kusadasi we will head north and sail through the Dardanelles and then through the Sea of Marmara to arrive in Istanbul around 16.00 hrs. for an overnight stay.  Today we had very nice weather. Sunny, hardly any wind and not too high a temperature.  Tomorrow should be the same 23oC / 74oF and a steady breeze of about 16 knots.

Note: There is a drop down box on my blog site here, called Current Captains and their Schedules. It has now its first entrant, Captain Emiel de Vries Master of the ms Koningsdam. Eventually all the 33 other captains will follow.