The port of Homer is a bit of a peculiar thing. It is sitting right on the beach. A beach which is called the Spit and that is one of the reasons we are calling there. The Spit is a long and narrow peninsula sticking out from the main land and there is a sort of settlement located at the end; which is frequented by large numbers of fishermen and a whole tourist industry has sprung up around it. Restaurants, Pubs, Souvenir shops, Fishermen shops and anything else that might attract the tourist and fisherman alike. Because of its remoteness everybody comes by car and the whole approach road all way to the end of the Spit where everything is concentrated is filled with pickup trucks and RV’s. If you are planning to buy one of those and do not know what model to buy, just walk along the street here and you can compare all the brands free of charge and in one location. 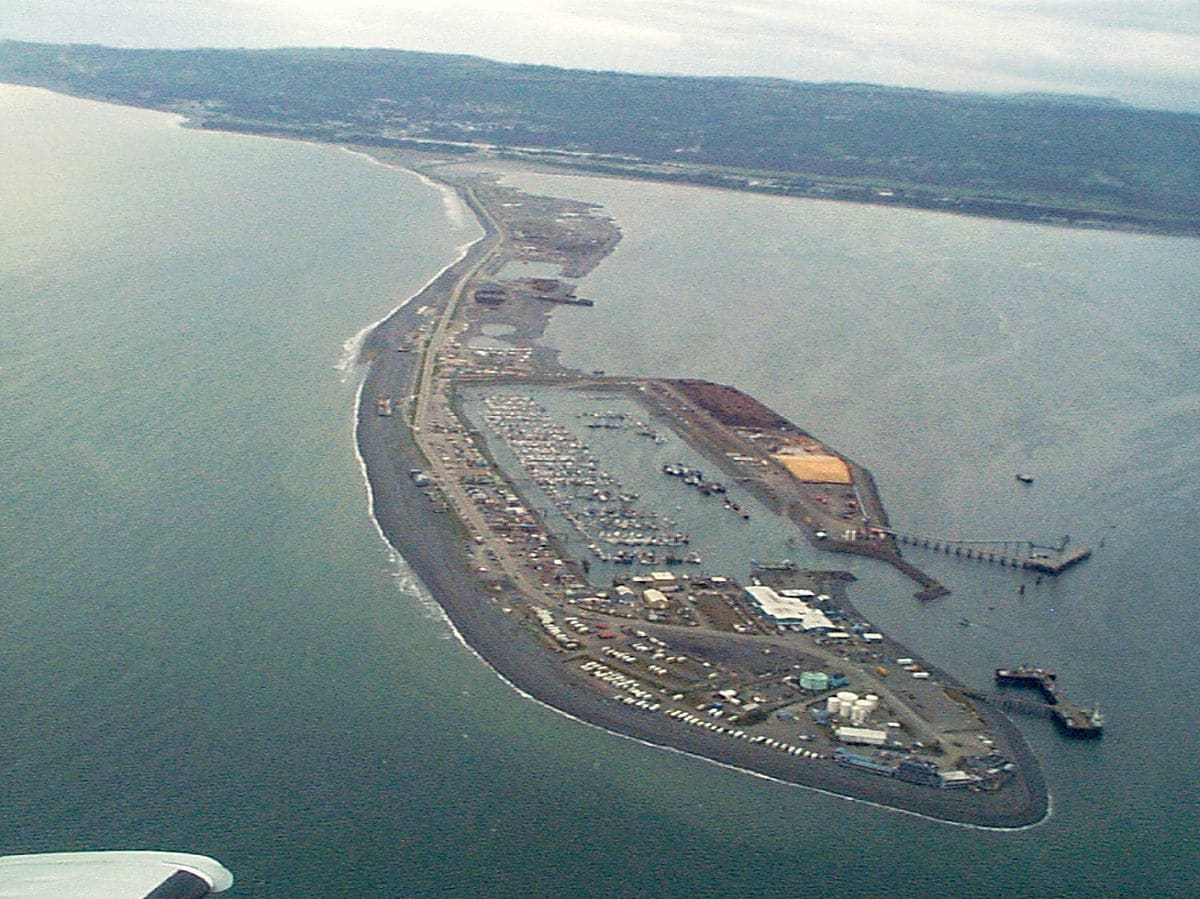 The Spit with Homer in the far background. The ship is docked at the finger pier just to the right of the Orange Canopy.  Photo courtesy: unknown source on the internet.

The Spit is also the area for a very large Marina and that is also were we dock, making the Amsterdam the most luxurious yacht in the port. Getting from the ship to the Spit is by means of a complementary shuttle service for which they use school buses. Not a bad idea, as those buses are normally standing idle when they have delivered their early morning load of young America. Homer itself is on the main land, all the way at the end of the Peninsula. To get to Homer there is also a shuttle system available but you have to buy tickets for that trip, or take the shore excursions which mostly include a visit to Homer itself as well. 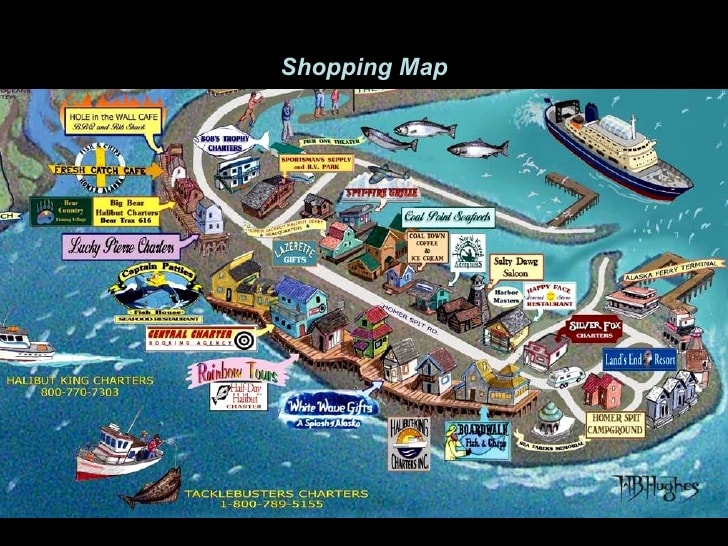 And this is the “tourist version” from the same Spit. Quite a few things to do while wandering around the place. Thank you to Mr. H.B Hughes who drew this picture.

We were blessed with a sunny day and that was very much needed as it was very chilly. Although the weather forecast had promised a windless day, there was still a gentle breeze blowing but it was a very cold breeze and did not feel very gentle on the skin. I poked my nose outside to touch Homer soil and then hopped straight back inside. I have sunglasses with me but not a fur coat and I needed both today. I wonder what it is like to live here in the winter as the area is not sheltered at all. The Spit is very flat and I would not be amazed if it would partially or completely flood if they get a Storm combined with a Spring Tide. The guests were lucky as it did not rain and the bracing day did not keep them from going ashore.  And they should go ashore as the Spit is quite a nice place to mill around for a few hours. The largest pub has quite a few Craft Beers on draft for those who also wanted to immerse themselves in the local culture by means of a beer glass. 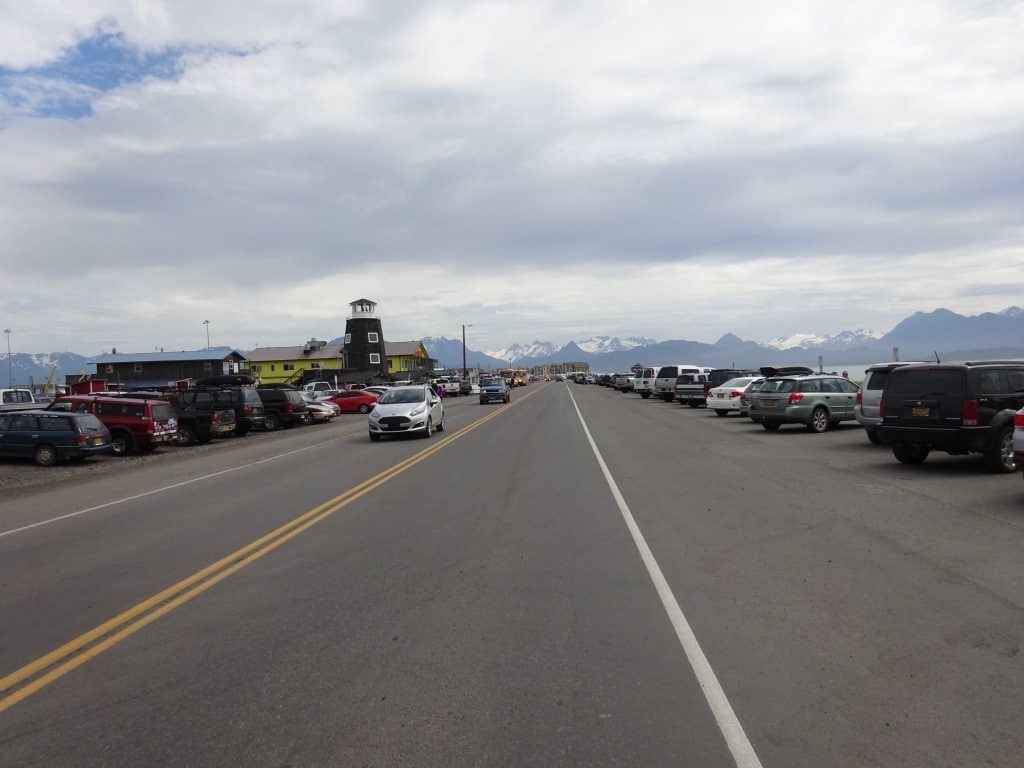 The long road on the Spit. Photo taken during a previous visit.

We arrived here at 10 am. in the morning a bit of an unusual time but that has to do to a large extent with the strong currents in the Captain Cook Inlet. If you set the schedule too tight and you get a strong adverse current, maybe even “enhanced” by an adverse wind you can be an hour late very easily. That has then a knock on effect for shore excursions and everything else, so a 10 am. arrival guarantees that the ship will also be there at that time. By leaving at 18.00 hrs. the guests still get more than enough time to see all the sights.

Tomorrow we are going to do it the other way around. We will be docked before 07.00 hrs. in the morning but leave early in the afternoon at 14.00 hrs. Kodiak is just a short hop south of Homer and thus we can keep that schedule at all times. But after Kodiak we have to cross the Gulf of Alaska again and then we might have adverse weather while doing so. So an early departure from Kodiak will gives us some leeway to ensure that we reach Sitka on time.

The weather forecast does not look too bad at all for the moment but it can change very rapidly here and a forecast six hours later can look quite different from what we looking at now. Below is what we should get tomorrow when we are in the middle of the Gulf, if it does not change. Looking at six foot seas predicted, and then I say “its not bad at all for this time of the year.”

Synopsis: A surface ridge will shift east across the gulf through Thursday and displace a trough of low pressure over the southern panhandle toward the south and east.