After embarking the pilot at the Homer pilot station the ms Amsterdam sailed up Captain Cook Inlet to arrive at the Anchorage dock around 07.30 hrs. Anchorage does not have a real passenger terminal but more of a modified cargo shed which is understandable as the dock is extensively used by cargo ships during the off season.  As Anchorage is the largest city in Alaska and a gateway to the central part of the State thus there is a large amount of commercial traffic going on.  It benefits from a big train station (where the trains we use from Seward are terminating) and container ships call on a regular basis. Going by the names on the containers, Matson, which is better known for their shuttle service to Hawaii, has quite an important presence there. 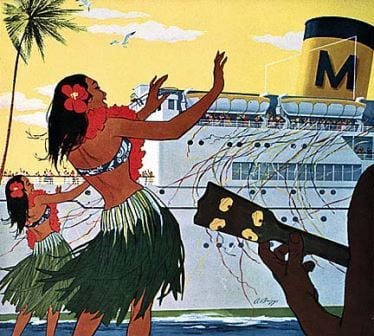 When getting to Hawaii by ship was the only way to go. White ships and Hula girls.

Matson used to be a big Ocean Liner company as well, again predominantly servicing the Hawaiian Islands, before the air planes took over. It built some beautiful ships and many an American dreamed before the 1960’s about a Honeymoon to Hawaii; and sailing on a beautiful white Ocean Liner was a major part of the experience.  White beaches are not exclusive to Hawaii but the white ships of Matson were. But as with many passenger liner companies, Matson could not make the change to cruising when the airplane arrived but they still have the cargo side of the operation, which seems to be doing well as I see their containers in many American ports on the west coast.

The main challenge while being docked in Anchorage is the tide. I mentioned that we already have challenges in ports as Juneau and Ketchikan but Anchorage is one step up from that. If there was a port which could do with a cruise ship pontoon dock, then it would be Anchorage. Due to the narrowing of the Captain Cook Inlet, the water is pushed up and that can give cause to some extreme tides. Also today we had a good one, being 1.4 feet under normal at 13.00 hrs. and then rising to almost 32 feet by 19.00 hrs. That is a variation of 33 Feet between low and high tide.  And that means fussing around with the gangway again during the day to make sure that our guests could get ashore and back without having to climb to steep a ramp. Even more important today as it rained until mid afternoon making everything rather wet and damp. Luckily there was no wind, so even with temperatures barely coming above 50oF / 9o Celsius it was not that cold.

As the port is mainly a cargo port, it is not allowed to walk on the dock but there is a continuous shuttle service to the downtown mall. I have now been a few times to Anchorage and it is basically laid out as any other American town with the difference that it is a fairly young town so there are very few monuments and old buildings to be found. But it has a nice out of town shopping mall, Dimond Center (pronounced Diamond) and I was able to obtain a Television Flat screen for the Bo ‘sun store.  So by tomorrow the Bo ‘sun store will be enriched with a 65 inch screen for all the training’s the sailors have to go through nowadays. 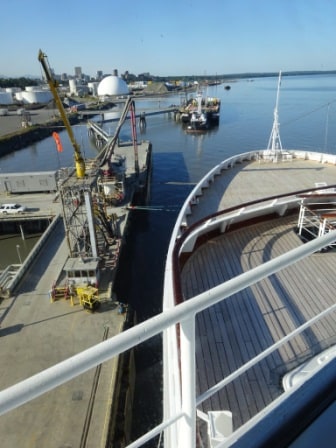 Anchorage as seen from a HAL ship on a sunny day in 2015. The town is about 10 minutes away by shuttle.

The ms Amsterdam sailed from Anchorage at 22.00 hrs. catching the last of the ebbing tide while going down the Inlet again. By 10.00 hrs. tomorrow morning we should be docked in Homer which is a totally different place from Anchorage. Also the weather should be different. Same temperatures as today, also no wind, but more important, it should be sunny.