This band of rainy weather is stretching down all the way from Ketchikan to Seattle and the normally very green island of Vancouver looked very grey and dull when the shore line came into view around 11 am, when the ship approaches Strait Juan de Fuca. Normally it comes into view as thin green line and when coming closer it turns out that the thin green line is a mountain range. Today it was mostly obscured by rain clouds.  Those clouds stayed nicely high up in the sky until around 14.30, by now the ship was well inside the Strait and here the temperature difference was still such that the clouds descended onto the water for about 2 hours. And that meant that the whistle was happily blowing again its 2 minute cycle. When we neared the Northern part of the Puget Sound, the world opened up again.

It was very windy, so the parade of Seattle ships had quite a challenge to get inside Victoria. The pecking order this time was NCL first, followed by, followed by us. The wind was almost due east, running a wind force 7, and that meant that docking was luckily still possible. The berths at Ogden Point are SS/NE in line up and thus the wind was mainly on the stern, making the drift of the ships controllable. But it all took more time than usual, so the gangway went out a little bit later than normal. Luckily Canadian Authorities are very quick in clearing ships if you have your paperwork in order, and 15 minutes after the gangway was out, most of the guests could stream ashore.

For some it was their first time in Canada and I overheard two rather startling observations. One that Canadians in Victoria spoke English, secondly that the road signs had funny words on it. Obviously the fact that the Canadian road signs are in two languages had not yet reached the depths of Kentucky. I assume the guests came from there, as they had one of these sewn-on signs on the handbag: I am proud to come from Kentucky. (American Flag to the left, text to the right). Well at least they learned something. Travelling does broaden the mind. If they were from somewhere else, then I apologize un-reservedly to all people from Kentucky.

We also have a group of Texans on board, who proudly walk around with large cowboy hats on their heads. They turned out to be quite handy in Ketchikan. At least the ones that  were made of solid material, and thus looked waterproof. One gentleman was wearing a straw version and that hat slowly started to wilt under the constant rain and drizzle of the Ketchikan weather. Obviously where he lived rain was not much of an issue. 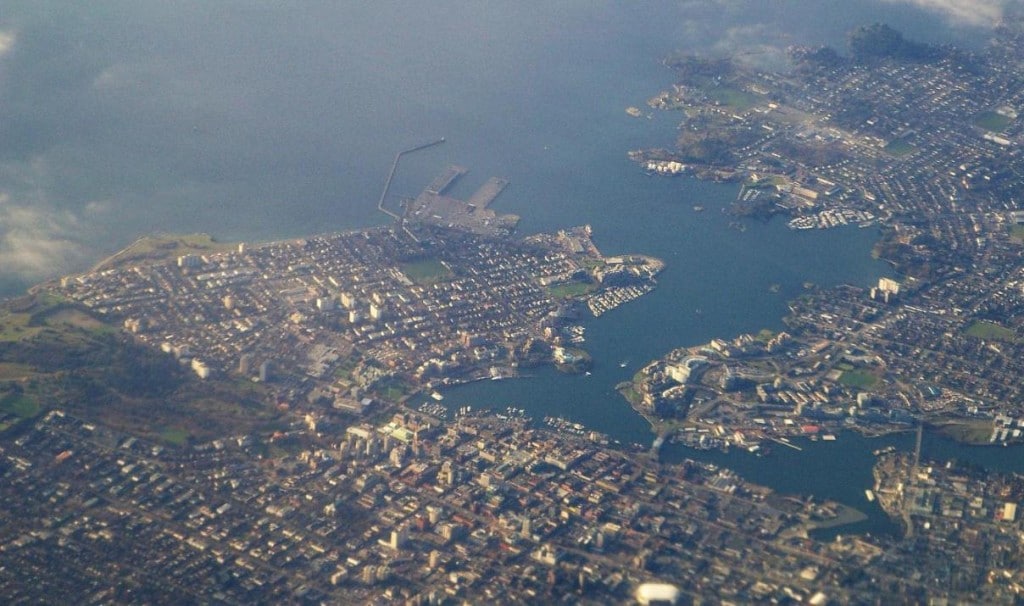 Victoria harbour as seen from the air.

Victoria is a nice city which I like very much, so it is a pity that this is only an evening call. For most of the crew it is of no use as they are all working in the evening. Plus as the city is curved around the port, it is not so easy to run into town for a few minutes. Something you can easily do in Vancouver.  So most crew come to Victoria with the ship but never see it. Only on occasion we have a full day call, when a ship is on a repositioning cruise. It is in a way a pity that Victoria gets most of its summer traffic in the form of evening calls by ships which have to comply with the Jones Act.

Having that done, the Amsterdam pulled out just before midnight for a quick dash south through the Puget sound to dock in Seattle at 06.30. Again the same parade of ships, with the NCL one heading for downtown and HAL and Princess to Pier 91, more to the North.

The weather for Seattle is forecast to be about the same as to day. Overcast with temperatures in the mid-fifties, chance of showers but not much of it, and that is not bad weather for travelling.