Well the weather did what was forecast and in the course of last night, the wind came down to something more acceptable. 20 knots or so and that is what we are used to in this area. By 08.45 we had past Cabo San Antonio and turned to a North Easterly course and entered the Straits of Florida. Now we are completely at the other side of the weather system and in the other counter flow, and that means we have the 30 knots of wind back. But no rain; the sun is nicely shining and all is well in the world as we expect the wind to die down again in the evening.

Where we are is never simple to describe as human kind with their penchant to give everything a name has also made it a bit of a confusion when it comes to naming the sea in these areas. So when we sailed away from Puerto Limon we were in the Caribbean Sea. But we before we entered the Straits of Florida we first sailed through the Yucatan Channel.  The same happens at the other side of Cuba. You are happily sailing out of the Windward Passage and into the Caribbean Sea but then you suddenly realize that somebody has decided to give that area another name: The Jamaican Channel.   My idea of a channel has always been a fairly narrow passage. A bit like a canal but then without locks. But these channels are not that narrow at all. There is something else wrong as well; scientists have officially decided that it cannot be a channel because it is not long enough. So there you go, but nobody is doing anything about having it changed. So a channel it remains although there are also factions who call it Yucatan Straits but that seems to be wrong as well, as it is not wide enough for that. 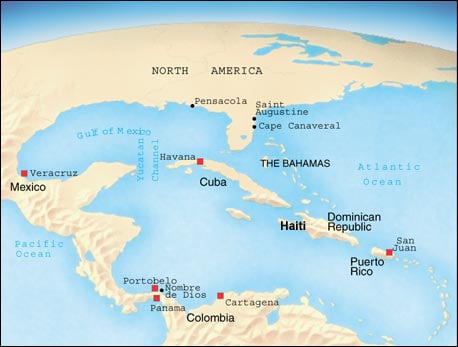 The Yucatan Channel named after the Yucatan peninsula, part of Mexico. Somehow Cuba lost out here in the naming process.

The Yucatan Channel or Yucatan Straits is 135 miles wide and has been recognized as the official connection between the Gulf of Mexico and the Caribbean Sea. It is the deepest at the Cuban side where the depth reaches down to 9000 feet which certainly helps with getting all the water through.

Although we only talk about the Gulf Stream pushing through there, there is also a Yucatan Current. Scientists have decided that another name was needed because not all the water from the Caribbean Sea flows directly into the Straits of Florida. Some of the water flows into the Gulf of Mexico and creates a circulation there with the water coming from the North American Plateau.  Some of this water curls around the Yucatan Peninsula and into the Gulf of Campeche, the bay on the west side of the Yucatan Peninsula.

For sailors it is important to realize that there is a Yucatan Current which goes West, North and East. Simply because Hurricanes tend to follow currents as they feed off them. An extreme example was hurricane Gilbert who did not follow the regular path of going north but travelled over the northern tip of the Yucatan straight in the Gulf of Campeche.  Normally when captains plan for hurricane evasion, they think primarily: will it go left around Cuba or will it go right around Cuba. Travelling straight over Cuba is not nice for the Cubans but no problem for us as we cannot sail over land. Based on that we are looking for a plan to stay clear. But if you would be coming down from New Orleans then it could become more complicated as the approaching hurricane coming towards Cuba could, because of the Yucatan Current, go left, right or straight up.

This is one of the reasons captains have issues with going to New Orleans in the Hurricane season. Due to the 10 hr. trip down the river and then having to sail down the Gulf of Mexico it takes a lot of time to get away from the danger area. Tampa or Key West are much better as you can get within 12 hours to the other side of Florida.  At the moment Holland America is not sailing from New Orleans and thus we do not have to worry about such things.

Who is worrying is the captain. My colleague is going on vacation and wants to make his plane on time, so nothing should stand in his way to get docked on time. He will be relieved by Captain Wouter van Hoogdalem who is the alternating captain for the Zuiderdam and who will be on board for the next three months. Makes me feel old: I had both of them as junior officers on my ship when I was staff captain. But I can still teach them a few things and that makes it feel good again.

Weather for tomorrow: 29oC / 84 oF. mainly sunny and a gentle breeze of 10 knots. What a better way to end  a cruise.