Today we are having our first day at sea and are sailing on a North Westerly course heading towards the Yucatan Channel where the Caribbean Sea meets the Gulf of Mexico. It looks like that we were lucky with our call at Puerto Limon as the weather has turned for the worse. A strong cold front is moving over, bringing lots of rain, lots of wind and only an occasional moment of sunshine. And it is all moving in the direction of Costa Rica and thus the swell will start to increase again and will not make for a happy stay in the port for the ships arriving after us.

We really were in luck yesterday, because the moment we left the port, the heavens opened up over the City and the rain came down in large quantities. To maintain the rain forest, they will need that rain but our cruise guests do not exactly need it, and yesterday they were lucky. But today we have to face the weather and we are ploughing straight into it as well. The ship is making 20 knots, the wind velocity is 35 knots and on the exposed areas the combined relative wind reaches 50+ knots. So if you wanted to feel what a heavy storm feels like you would have to climb on the bow and do “a Titanic”. We do not want that so we keep the bow closed and on the higher decks we have wind screens. 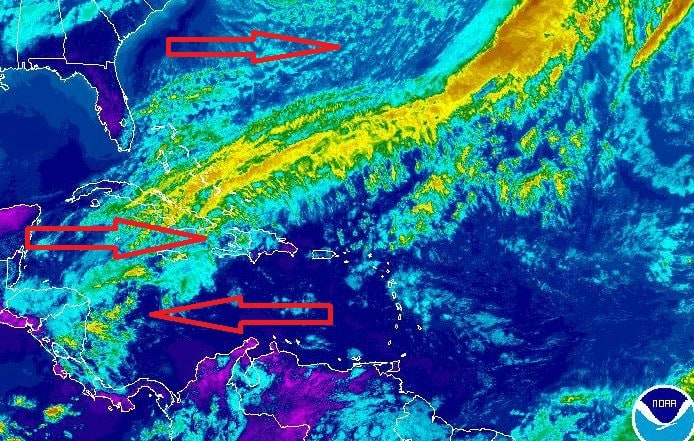 The red arrows indicate the main flow around this weather front.

It being winter means that cold front after cold front is coming over the area in a sort of washing machine pattern. Bad weather starts off at Cape Haterras where the cold air from the plains meets the warm air from the Gulf Stream. That gives a frontal system which moves to Europe or up to Iceland depending on how the Jet Stream flows.  When that wind flows away, it creates a vacuum and that is filled by air coming from North Mexico into the Gulf of Mexico. That creates a vacuum and that is filled by air following opposite, following the regular Trade Wind route.  On a sort of three day balance the directions move to and from which result in winter days of hot weather in Florida and days of cold weather.

Because things are quite forceful in the North Atlantic there is a strong weather front moving to the North East and thus also a strong counter flow under it. And we are right in the middle of it. The good thing is, we are moving, and our course is going right through it and thus we will emerge eventually at the other side of it. We expect that to happen when we come north of the Yucatan Peninsula which will be late tonight. 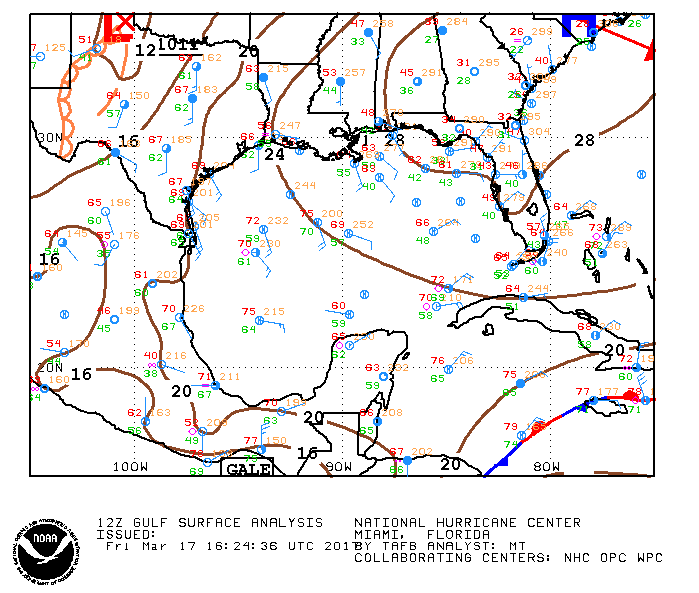 The Gulf of Mexivo. The blue red curve right under, laying over Grand Cayman  indicates the edge of the frontal system. The blue arrows are wind. The word Gale at the mid bottom is the Tehantepec wind which is blowing very strongly at the moment.

That should bring the wind down from 35 knots to about 20 knots. And then for Sunday, when we are in Fort Lauderdale it should come down to 10 knots.  In the meantime the seas which we are in are being pushed up by the winds and that makes the ship move a bit. Not rolling as the wind is nearly on the bow but more shuddering as the ship wants to pitch but does not know how to.  Not that it has any effect on the guests, according to reports received, the bingo was well attended.

Courtesy of both pictures, NOAA.  THANK YOU NOAA WHAT WOULD THE SEAFARING COMMUNITY AROUND NORTH AMERICA  DO WITHOUT YOUR WEBSITES ??