Indeed the weather was with us today. Yesterday in the Canal the wind was already getting less and less and when we arrived this morning at the pilot station, there was no white cap to be seen. Just a little ripple indicating a wind force 1 to 2. That meant that during the night the waves had lost a lot of their height and strength and that made for a good day. Last cruise the swell had made it impossible for the ship to dock alongside the pier, this time there were no worries.

And thus the good ship Zuiderdam met a smiling pilot at 06.00 hrs. with only good news to bring and the ship sailed in at once. Puerto Limon is one of the more simpler ports to dock in (if there is no swell of course) it is just  matter of sailing in and then deciding if you want to go portside alongside or starboard side. Starboard side is preferable as A. it takes less time to leave and B. if there is swell, the bow of the ship is better in dealing with it than the stern. The bow can ride on the waves and also cut them apart, but the stern being square, gets the wave every time under the square end. Then there is the danger that the swell will lift the ship up and start riding along the dock. Not good for the ropes and even worse for the gangway and the guests. 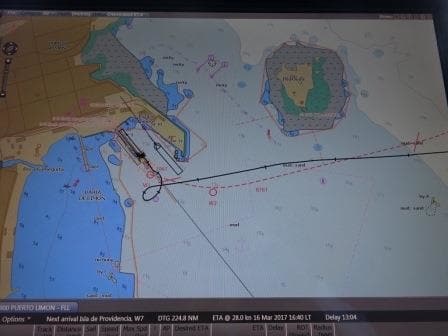 The approach according to the electronic chart. The black shape to the right is the Celebrity Equinox approaching the container berth.

Thus we swung on arrival and went astern alongside. Later on the Celebrity Equinox arrived and she went nose in. I think because she was on the late side. But today it did not really matter for her, what side was chosen. 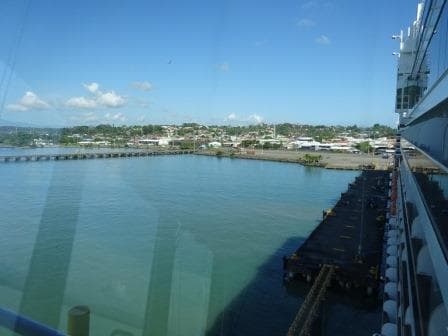 Puerto Limon as seen from starboard bridge wing. The country is low and flat, except for the middle part where there are high mountains.

Puerto Limon is a tour call for us as with the beautiful hinterland it is a great place for seeing wild life and the tropical rain forest.  It is a country which is really trying to preserve nature and there are extensive nature reserves both on the Atlantic and the Pacific side. If you cruise on the Pacific Side then Holland America takes you to Golfo Dulce and Puerto Caldera /Punta Arenas where things are similar. Guests came back today with stories about having seen monkeys and “lots of noisy birds” so I assume the tours were a success. 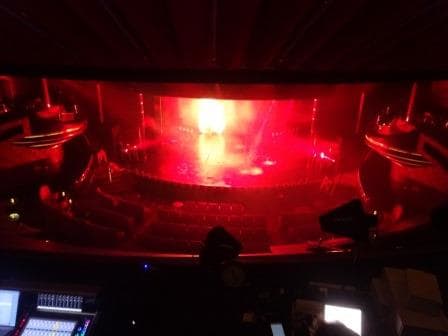 With modern projection you can now simulate near real fires.

I threw one of my specials today. Set the show lounge on fire and then have 30 or so casualties for Medical to try and save. We have an official disaster plan for this called the Mass Casualty Response Plan which provides guide lines of how too few doctors should try to save too many injured people. With a majority of entertainers as casualties (Natural Actors / and Actresses) there was enough mayhem created for the Medical Staff to be really focused and involved.  A major part of the evolution is the transport away from the disaster area to a safe location where a second triage can take place and from where the the final disposition is organized. (Either back to the cabin, stay in the hospital or be medivac-ed ashore. 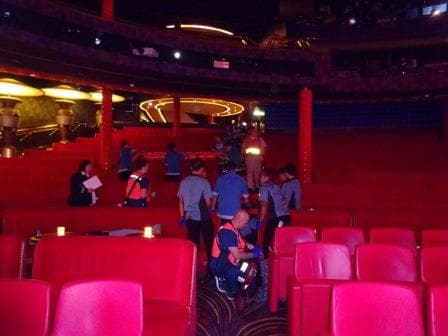 Doctor, Nurse, On Scene Commander, Stretcher Team and a Scribe for keeping track, all part of the machinery needed to make it possible.

My challenge is that I can only train on the flow of the drill and point out pitfalls to avoid. For the rest it all depends on the focus and organizational skills of the participating officers and crew. Today we had about a 100 crew involved varying from Fire teams, to wheel chair pushers and the very important stretcher carriers and casualties.  Hardly any of the crew had ever done a drill like this, so the focus was there and so as long as you have that, then the drill is already a 50% success. Plus you do not always get the chance to run a drill in the main show lounge, which is the largest public room on board.

The Gents and Ladies from Housekeeping had a heavy job today, carrying stretchers up the stairs and then to the medical centers. But they did very well.

Tomorrow we have our first of two days at sea and then we are back in Fort Lauderdale. If things go according to the last plan, then I will remain a few more days on the Zuiderdam before transferring to the Westerdam. If the cabin situation works out I will train 6 new navigators for 14 days while the Westerdam sails to Europe.

Weather for tomorrow: wobbly but not too bad.

Note: Under the Current Captains section, the Biography of Zuiderdam captain Bart Vaartjes has now been uploaded and also the sailing schedules of the Captains has been updated.