Today went sort of on schedule although we were not able to repeat the performance from last cruise when were docked by 15.00 hrs. in Colon. Now it was just before 17.00 hrs. and nothing we could do about it. It all depends on when we fit into the slot for the traffic going through the Gatun Locks. That is the traffic coming from the Pacific side. This time there was no early gap and thus the ms Zuiderdam had to wait until a gap became available. The PTA (Panama Canal Authority) cannot “hold” a gap for us as they do not know when we will be ready to return. Running a tender service is not clock work and getting 1100 guests off does take a bit of time.  Going out through the new locks is also not an option, even if there would be a gap there, as the PTA tries to limit the water loss by sending only the real big boys through.

This is supposed to change next year when they will take reservations for cruise ships who want to go in one way and out the other way. But there will be a price tag attached to it, first because of the extra water loss and secondly because that ship now has to be planned into the double system. All this makes the tariff system for the Canal very complicated. At the moment the basic charge per passenger berth for a cruise ship is which can use the old locks $ 138 a berth. For a cruise ship which has to use the new locks it is $148 a berth. (So if we have empty beds, the company still has to pay for it) Then there is a plethora of other costs, including a charge for the crew and for a ship of the Zuiderdam size it comes to a transit fee of about $ 348,000.

For some reason it did not look that busy today in the locks; ships were coming and going but there was a very lower number at the anchorage on the Cristobal side. Maybe it will be different again tomorrow. Although not all the ships at the anchorages are there to go through the Canal. Both the Pacific and Atlantic side have extensive fuel bunker facilities and ships stop at the Panama Canal roads just for loading fuel. Then there is the reason of not having paid the transit fee. The PTA charges upfront which is understandable as there would be operators who would conveniently forget to settle the bill. A number of years ago it was so bad that payment in cash was required for those ships that did not have a long standing agent in Panama who had the monies available in an escrow account.  Holland America has had the same agent (Fernie & CO) for as long as any of us remember and thus far we have never been delayed because of a non-timely transfer of funds. It had better not happen as the ship does carry a corporate credit card but I think it does not run to $ 350,000 — 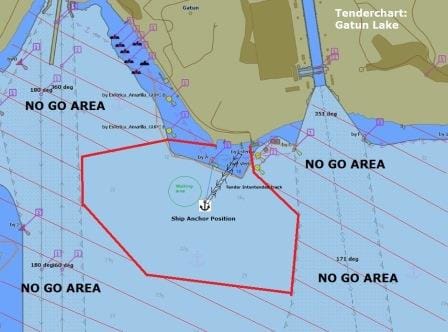 The tender chart for all drivers. It is a pity the ship has not been drawn in on scale, then it would been easier to understand that there is not much space.

The ship was sitting today or better said floating exactly in between the approaches to both locks. And we have to make sure it stays there. There is not much room at either side. Not only that, we also have to ensure that the tenders stay very close to “mother goose” as straying more than 300 feet away could cause them to enter the traffic lane for the Gatun Locks.  Next to where the Zuiderdam is drifting is the exact location where the tugboats catch the cargo ships approaching the Gatun Locks. Thus a little tender getting in between would cause havoc in the routine. Plus the tenders are made out of aluminum and fiberglass and those tugboats are pure steel.  So better stay well clear. 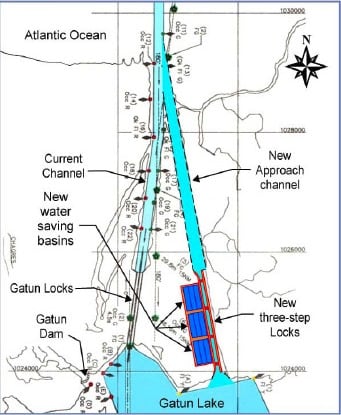 Our tender location in relation to the locks. The tenders go ashore exactly where the a of the word Gatun (Lake) is on the chartlet.

Tonight we will sail at 19.00 hrs. if everybody is on board that is coming back from the tour, and then it is a nights sailing to Puerto Limon in Costa Rica. Because that country lays a little bit further west than Panama, we will be going an hour back tonight. The only problem is we have to go forward again after we leave that port.  We will be at the entrance at 06.00 hrs. and should be docked about 20 minutes later as Puerto Limon is an open bay port (hence the reason we had to cancel last cruise because of the incoming swell) and the ship just can charge in swing around and throw the lines ashore.