As was expected the wind disappeared the moment we curved southwards and followed the Colombian coast down to the Boca Chica pilot station. But because the cooler North Easterly wind had already been reducing itself in strength, it brought also less cool air to the area of Cartagena and thus the warm tropical air could re-establish itself. Also the clouds decided to disappear and we had a sunny day. Together with the warm tropical air and the sun beating down, it was not only sunny, it was positively warm. For those on tours, the half size busses were sort of air-conditioned so the guests could survive and for those on board it was a good reason to find the shade wherever it was available. But before departure it was distinctively quieter on the outside decks than was the case in Willemstad and Oranjestad.

My day started early as I was on the aft mooring deck at 05.30 to follow proceedings there.  Safe Working is Holland America’s main priority and those who are to enforce that, Captain and Staff Captain can never go there as their place is on the bridge during arrival. Standbys are also something you cannot learn from a book; it is pure hands on skills. Observing, learning lessons from the Bo ‘sun and at the same time applying common sense as the Bo ‘sun might also make mistakes. Some of our newer officers come from other companies where the  ships make less port calls, when they do they use fewer deck hands and some of them do not observe the standard safety practices that we take for granted.

Thus arrival Cartagena I was present on the aft deck.  Although handing out ropes does not look very difficult; “as in just roll them off the mooring drum and bring them tight again”; it can be a very dangerous affair. Sailors might be obscured by one of the winches, the winchman might “pull instead of push”, you have to keep an eye on the linesmen ashore and you have to make sure the ropes do not get sucked into the propellers/Azipods.  A good deck officer has eyes in the front, in the back and in the side of his/her head.  The biggest secret to a safe operation is =====taking your time. Slow the process down until every move can be anticipated and then indeed it goes as it was anticipated. 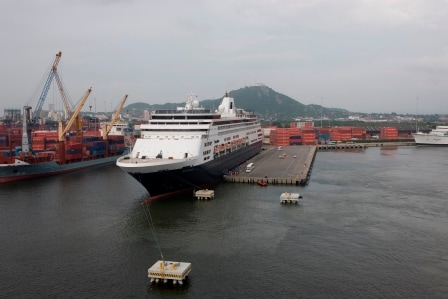 A photo of the good old ms Statendam seen here in 2012 at the same dock. Only the Zuiderdam went starboard side alongside, nose in. Note the dolphins.

Docking at Cartagena means that the stern of the ship is sticking out, causing long spring lines to go forward to a dolphin and the stern lines to run aft to another dolphin. To get the ropes there, we use a mooring boat provided by the port. In this case it is not a particularly specialized boat but more of a small ferry which is used for the purpose. It works but the working platform for the line handler is not as good as it could be. Each time we lower two lines into the water which are then being pulled to the dock with the boat. Sometimes in quite a complicated way as the Azipod wash makes it difficult to maneuver. The Deck officer now has to watch this boat, watch the ropes in the water, watch the sailors paying out the rope and talk to the bridge to let them know what is going on as from there you cannot see very much. 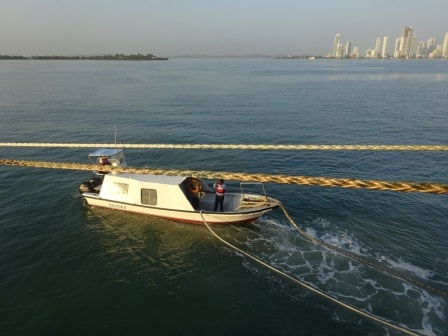 Our lines boat pulling ropes 3 and 4 from the ship to the dolphin.

Quite often the linesmen can be problematic, as they have their own ideas about ropes and what to do with them. (Very little if they get the chance)All this is being watched over by an officer who is often the youngest of everybody involved in the whole operation. Today we had a Lady 3rd Officer aft and she did a very good job. When she joined Holland America, she missed my school class as the cabins were cancelled, but somehow she had figured out that “slow – slow” is safer and often faster than just throwing all the lines over the side at the same time in order to save time.  Today we docked with six mooring lines and 2 spring lines as the weather forecast was good and every rope was given out and handled exactly according to safe and best practices. Always good to see something like that.

This is by no means certain. Last cruise was the first time in a year that the Zuiderdam and the Panama Canal Authority was able to stick to the schedule because there was a gap in the convoy coming from the Pacific. Maybe we can repeat that feat again tomorrow.

Weather for tomorrow:  You need a Hat, you need sunblock 50, and you need at least a pint of water every hour………….. Need to say more???  I will hide inside until it starts to cloud over or the daily rain shower.