It was a beautiful day, sunny not too warm but a little bit windy. As a sailor I would like to have seen a bit less wind at the anchorage but luckily we had shore tenders today as we were the only ship. And for the guests it did not matter at all as the beach and most of the facilities are on the lee side, so it was perfect and the breeze kept the temperature down. We had all the shore tenders available because we were the only ship. If there is another HAL ship in, then the biggest ship gets the two large shore tenders and the smaller ship (and the Veendam is always the smaller ship)  the two smaller shore boats but often then has to augment the tender service with its own ships tenders. I would not be amazed if the company will keep investing in more ship – to shore transport so it will get easier and easier all time.  But today we were all by ourselves and thus not a worry in the world. 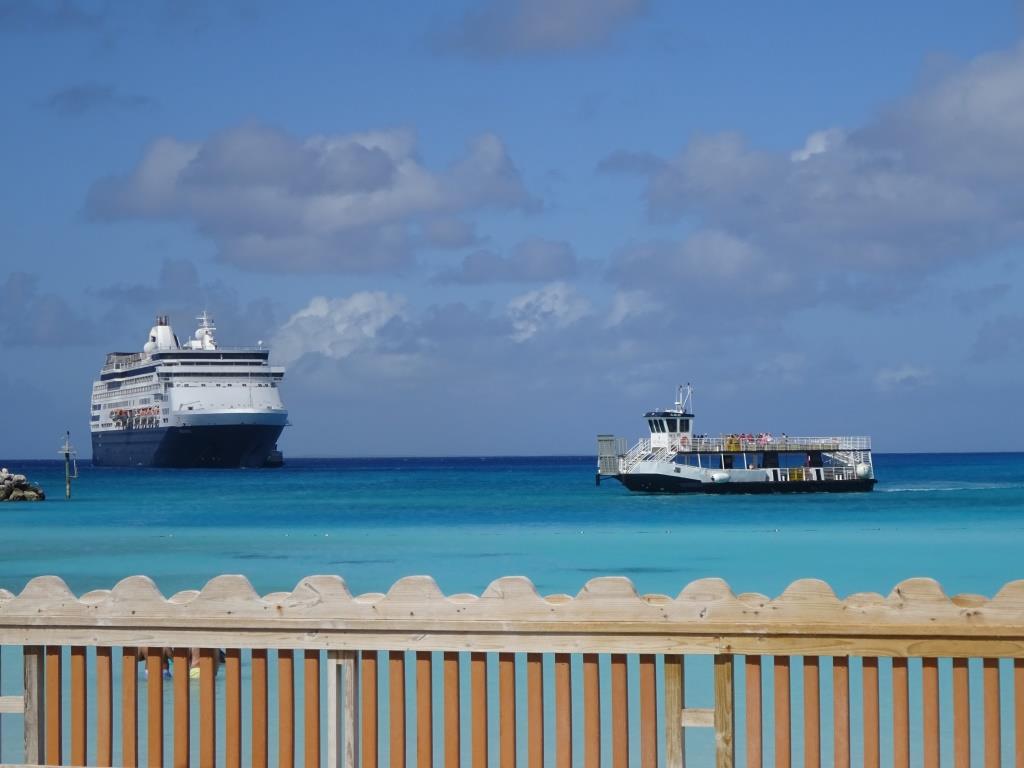 The Veendam at anchor as seen from the beach with one of the shore tenders in front. This is the Henry Hudson, and there are also the Anny Bonney, the Rookie and the  Stingray. The last one doubles up as a Glass Bottom Boat.  Further on a snorkel boat the Salty Sal and the Para Glider Boat called the Jack Sparrow.

My schedule gave me some space to go ashore at Half Moon Cay today as I am trying to stay abreast of all the new developments on the island. Every year new attractions are added but it is all done in a low key way, in line with the Island experience we want to give our guests, and thus I cannot always keep track of what they have added again.  Once ashore I was first almost run over by somebody on a bike and that was new to me: we now also have biking tours on the island. Because “Little San Salvador” is not so “little” that you can walk it all, large areas of land are beyond a casual walk and thus bikes have appeared and tours are being offered which show the local nature, geography, and history. Including the area were Columbus might have walked around. If Columbus would have been everywhere where it is claimed that he has then he would not have had time to return to Spain. But local lore has it that (if……) after landing on San Salvador Island next door in 1492 he hopped over to Little San Salvador Island next door. 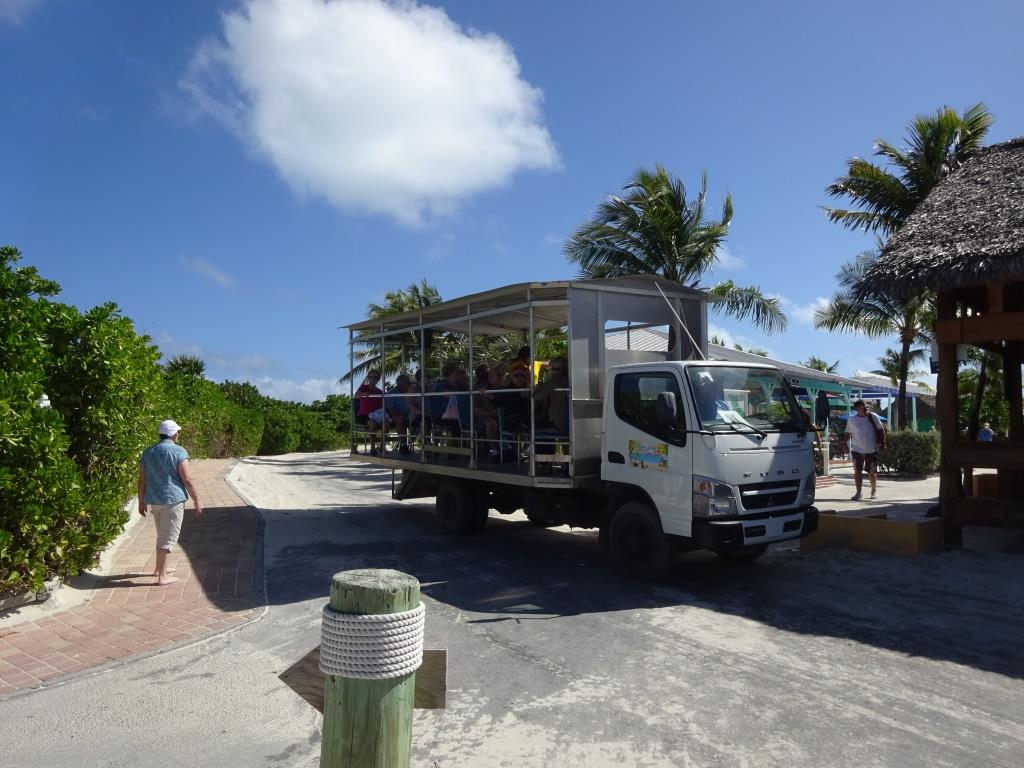 The local bus. You might wonder how they get a truck like this on the island, but on a regular basis there is a large Landing Craft coming to the islands with supplies such as wood, a tanker with oil and that also brings  transport equipment. That landing craft has a bow ramp and thus everything can just roll ashore onto the beach.

More “public” transport is available as there is now also a sort of bus service going around as an island tour for those who find long walks or bike rides too challenging. The “bus” stops at the tender drop off point and then makes a 45 minute tour around the crescent bay of HMC. It goes as far as the Pegasus Farm, where the horses are kept when they are not taking guests on rides on the beach. 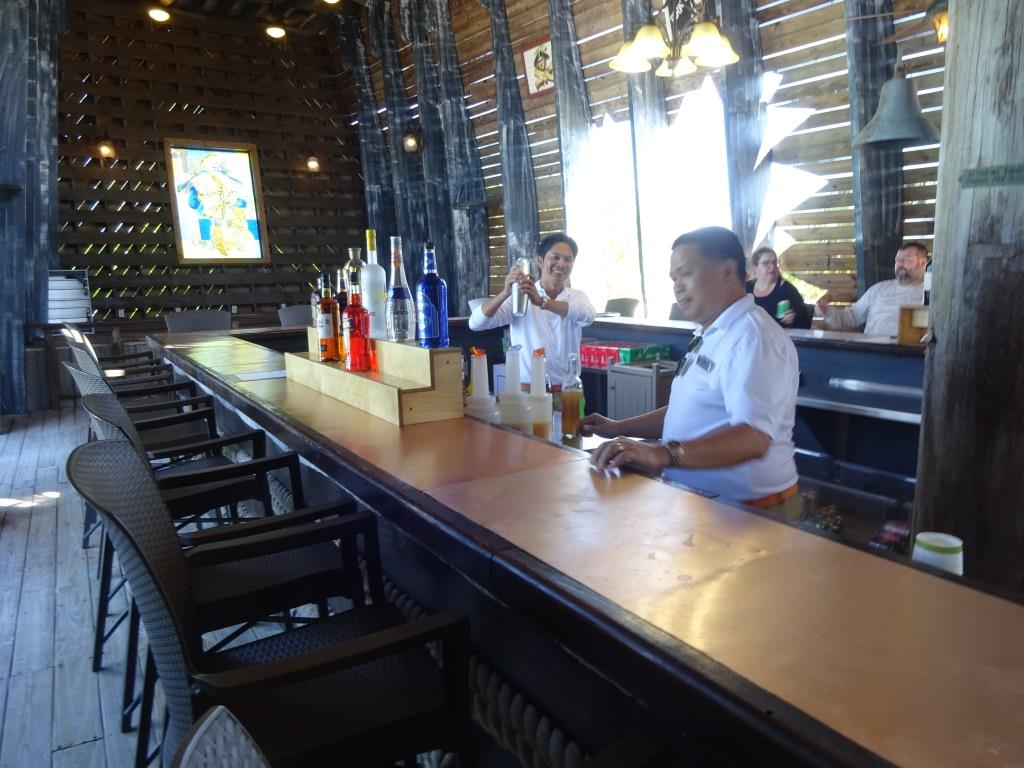 The Bar tenders at Captain Morgan’s (on the rocks) bar. Normally in the Ocean Bar on board, now in the bar on the island.  This was at 10 am. and normally it gets very busy here around 11 am. just before lunch or when the sun gets too much for the guests.

I had the plan to walk to the Pegasus but first poked my nose into Captain Morgan’s bar and was fatal as the staff, our ships bar staff, ordered me to sit down and have a drink. As it was 10 am, it was not that busy yet, and they know if there are one or two people sitting at the bar, then more will get the hint and join in.  So after getting “roaring drunk” on one diet coke I decided to skip the horses and walk straight over to our Tropical Restaurant to take photos before they would open. 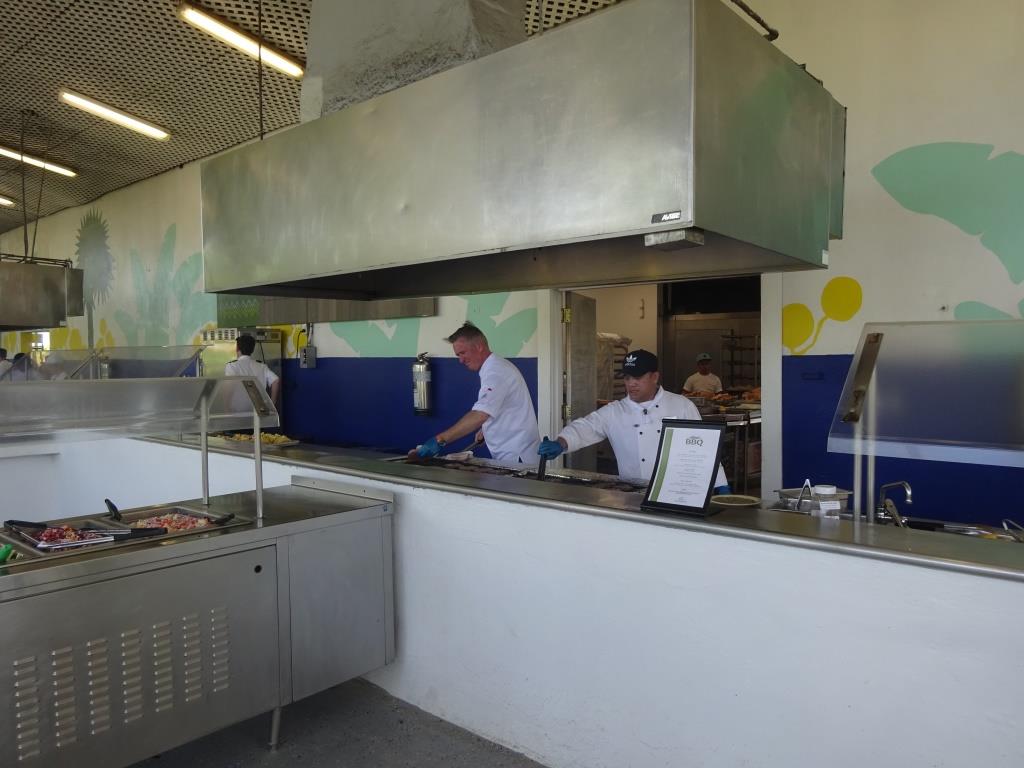 The two 2nd chefs preparing for the lunch invasion.

The restaurant is a large open air affair which can cater to 2000 guests without any issue as long as there are sufficient cooks (and food) dispatched from the ship(s). Same as with the bars (Captain Morgan’s, The Crab Shack and Bells Bar) the restaurant is staffed by ship/s crew. Most of the other venues such as the water sports, information and shops are manned by the locals who come over every day from Eleuthera Island with our own ferry the Half Moon Clipper II. 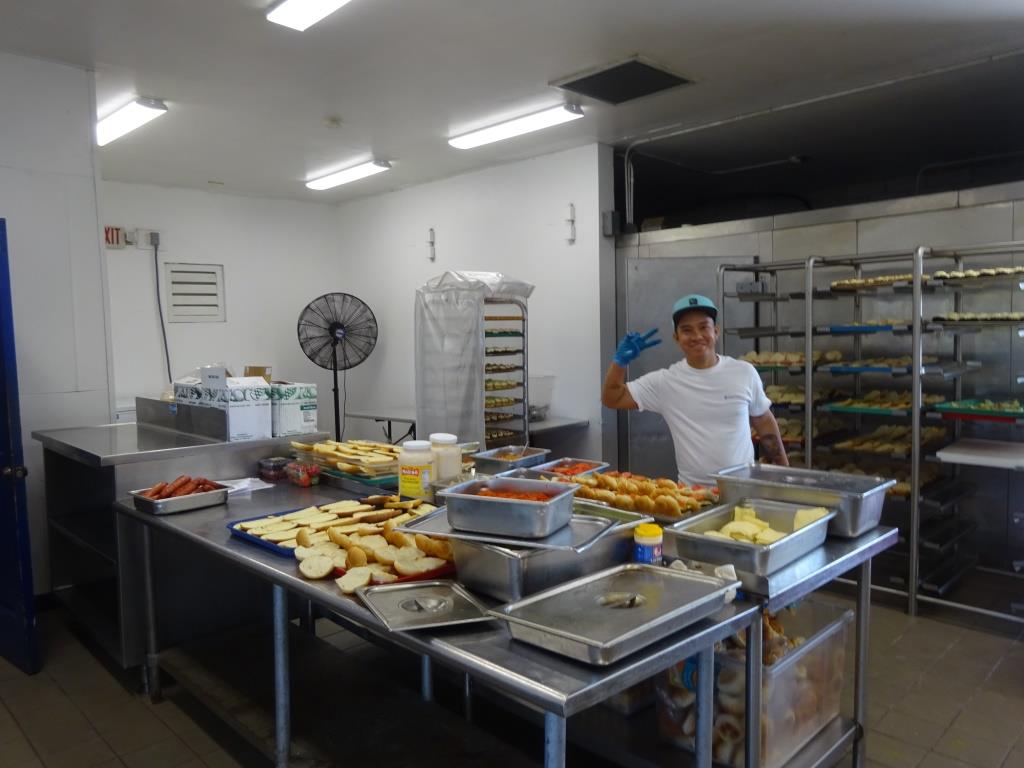 This is a big place and there is a complete prep. kitchen behind the buffet line which the guests do not see.

Because it is our own resort, the whole place is run as a ship and it is quite interesting to see that we apply all the USPH regulations in the same way as we do on the ships. For those who have picked up their food from the buffet, there are large – covered – sitting areas all around the restaurant so lunch can be taken in a pleasant atmosphere. Today one sitting area had to be shared with the local chickens as the Rooster had decided to take his Ladies out for a walk. 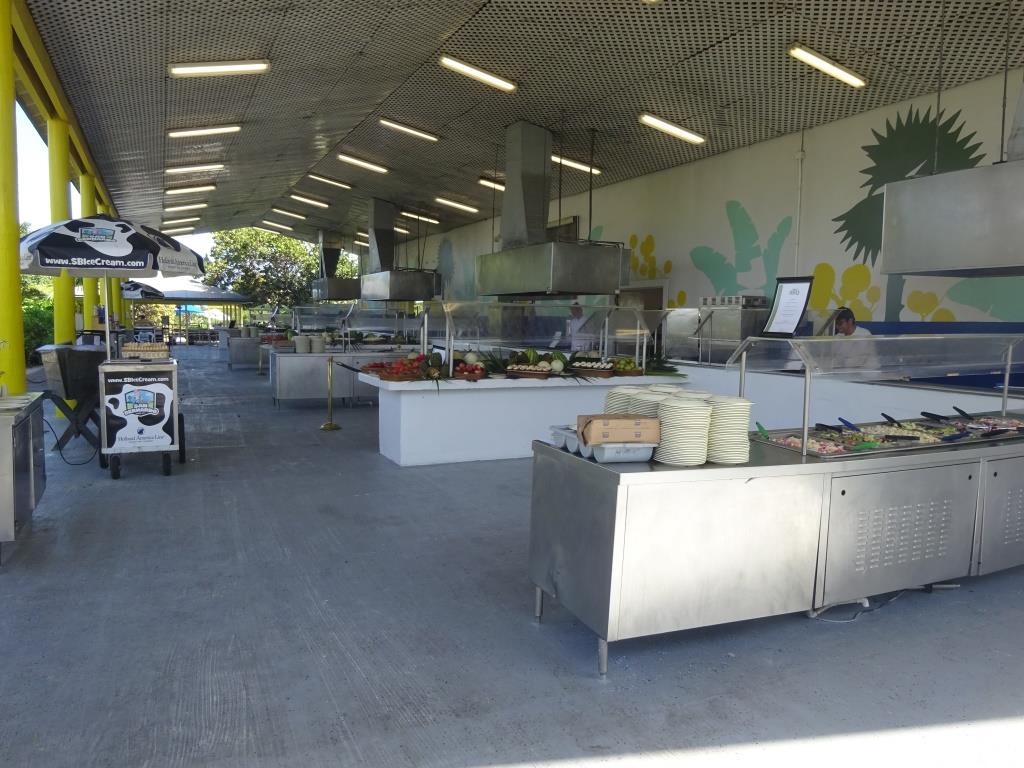 This is a big open air restaurant. It does not need walls as the weather is always good, just a roof against the sun and sometimes the rain. Not the ice cream cart to the left.

A new item which I had not heard of either are the Eco-kayaking-tours. We have the large lake in the middle of the island but which is part of the Nature Reserve. So no speed boats or para sailing but human powered peddling is more than welcome. Single seater kayaks and for the more romantically inclined also double seaters. 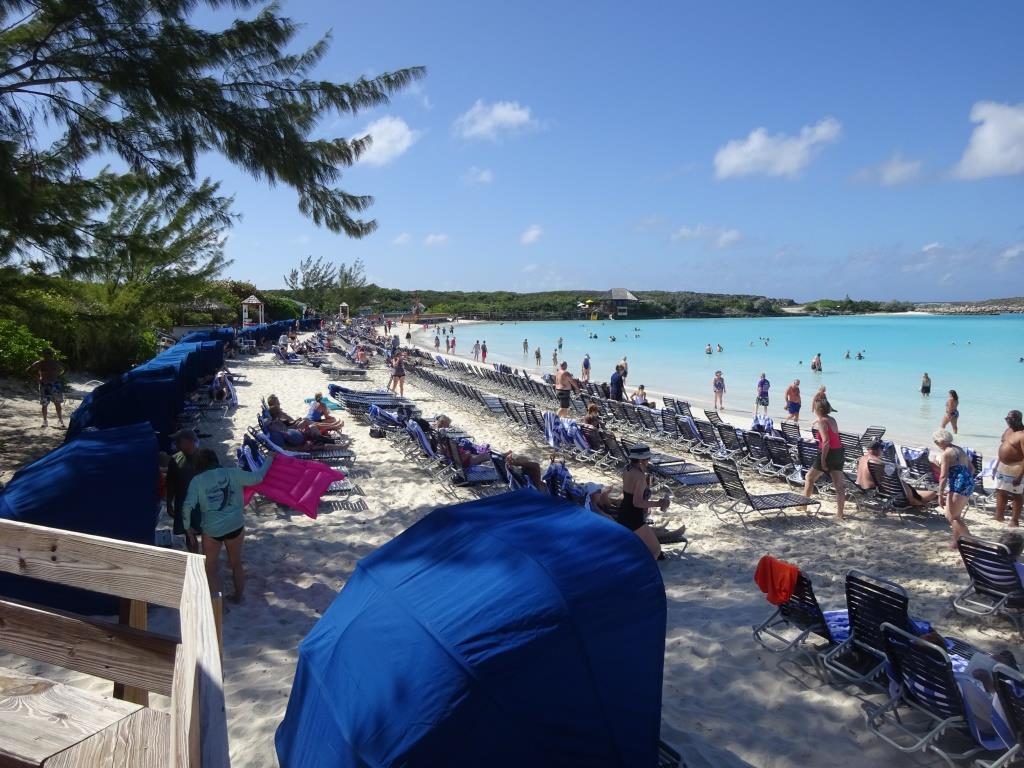 The good thing about being a small ship in. Oodles of space. And no need to reserve a sun lounger.

Our island is shared with the ships of Carnival, when WE are NOT there, and I always wonder what the island would look like if it was used to capacity. With 1200 guests ashore today, everybody had 4 stretchers to themselves, but if a mega liner would anchor with 4500 or so, then the beach would be a lot fuller, although still not full. The length of beach that we have here could easily handle a few 1000 more without having to put a sign up saying standing room only. Since we opened in 1996, HMC has gone from strength to strength, offering everything a beach go-er could ask for. Or as I heard this morning: “They even have an Ice cream cart”. And yes they have; two of them to be precise. 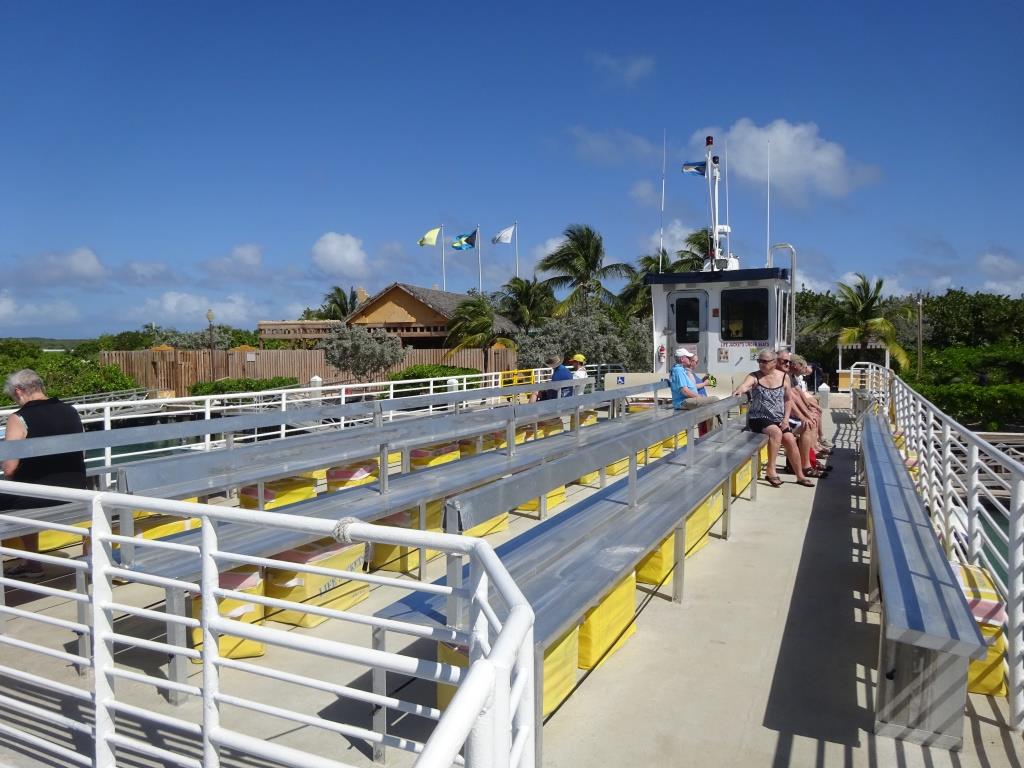 Unfortunately at a certain moment there is the tender back. This is the top deck of the Annie Bonney. The railing in the front leads to a wheel chair ramp as most of the island is wheel chair friendly with paved sidewalks.

Tomorrow we are at the end of our cruise and back in Fort Lauderdale.  As we are a Wednesday ship it is not as busy as on Saturday and Sunday so our leaving guests should have a hassle free time at the airport. As a matter of fact, we are the only cruise ship, apart from the local ferry to the Bahamas. Weather for tomorrow:  Partly Cloudy, 28oC /82oF and a gentle breeze. 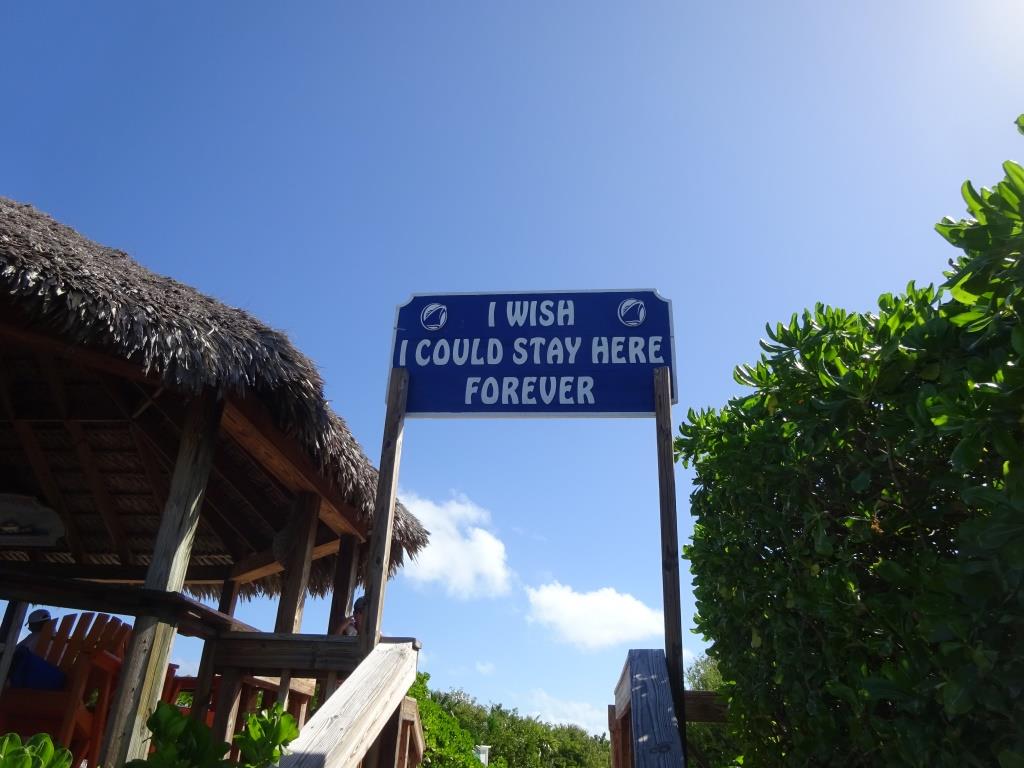 If you look at the ratings Half Moon Cay receives from our guests and the Travel Industry, I think that a lot of people would indeed like to stay here……..forever. (This is the sign you see when leaving the beach)