Thus today we have the final day of our crossing and also the final day of our cruise. They say that all good things must come to an end unfortunately, and thus also this cruise. I think it has been a good cruise as the weather was very good for a December crossing and the guests all look happy and the comments are positive. So we can say without doubt that the Nieuw Statendam will be an appreciated new member of the Holland America family for many years to come.

The last remnants of the frontal system of yesterday passed by through the night and today we had a regular nice sea day with partly cloudy skies and pleasant temperatures. The storm chart only gives flat seas; the rain chart does not give any rain at all, except for the system we have already passed. Also Fort Lauderdale is promising to be a dry day. With 25oC / or 73oF. and very little wind.

The Radar chart with the cloudiness in the area. There are some rain clouds far away but they should only reach Fort Lauderdale after the ship has departed.

This evening at about 18.00 hrs. we will enter the Bahamian chain of islands and then sail through the North West Providence Channel towards Fort Lauderdale. For that we have to cross the Straits of Florida. As Fort Lauderdale and its port, Port Everglades, lies a little bit south of where we come out of the Bahama Banks, we have a South Westerly course to aim for. That course will become more and more south westerly as we have to compensate for the Gulf Stream which is pushing north. The Gulf Stream is our friend and sometimes our enemy. Depending if we sail with the current or against the current.

Now we are dealing with the current under an angle, so the navigator only has to figure out the right course to compensate for the drift. The second interest is to find out where the axis of the Gulf Stream is located,  there where the current is at its maximum velocity. This is called the Gulf Stream axis and if you can find it then you will get the benefit of the “big push” when sailing in the same direction. If you go opposite then knowing the location helps you with devising a course as far from it as possible. The NOAA normally publishes a 3 day update as the Gulf Stream moves on occasion in the Straits and that can really be from all the way up the Florida beaches to all the way against the Grand Bahama Bank. And nobody really knows when it moves and why it moves. If some clever clog would be able to figure it out, then we would be able to get much more accurate data than we have now.

So crossing the Gulf Stream is basically a task of keeping an eye on the ships position and the “set” of the ship to the north and compensate for it accordingly. Normally we are out of the Gulf Stream influence when we are about a mile away from the Port Everglades Sea buoy but I have seen it that the current ran full force just outside the breakwaters and that we went into the port under a considerable drift angle. So much that even the local pilot got nervous.  The simplest solution is then to go in a bit faster as that reduces the drift angle. Once inside the breakwater there is more than enough distance to slow down again. The harbor master likes 10 knots in the channel, but if the current or wind is strong, the ship will go a lot faster to reduce the drift angle.

For the purpose of sailing under an angle and remaining in the middle of the fairway, they have installed a set of leading lights to help. The only challenge is they sometimes have parked a tanker in front of it and then the lower light is obscured. When the light was put in, the tankers were not as wide as they can be nowadays. We will be lining up in those leading lights tomorrow around 03.40, a few minutes after we have boarded the pilot. From there it is only a short hop to the dock as the captain has decided to go alongside starboard side, nose in, at Pier 26 and thus we do not have to swing on arrival. Once alongside that whole circus will start which I described a few days ago. I will be helping out to make that all go smoothly by getting off the ship ASAP and thus ensuring that the zero count does not get delayed.

And that brings me to an end of my blogging period on board the ms Nieuw Statendam. I hope you have enjoyed my daily musings about the progress of the ship towards its completion and the first two cruises which proved that the ship is a great success and a genuine asset to the company.

In January my blog will be relocated to a new server. This should not affect anybody at all but in case there is a hiccup you might have to refresh your automatic link to the blog. My first ship in 2019 will be the Zuiderdam which is on the schedule for Feb. 10. and that is also the date that my blog will recommence.

Thank you for your interest and support and Happy Holidays. 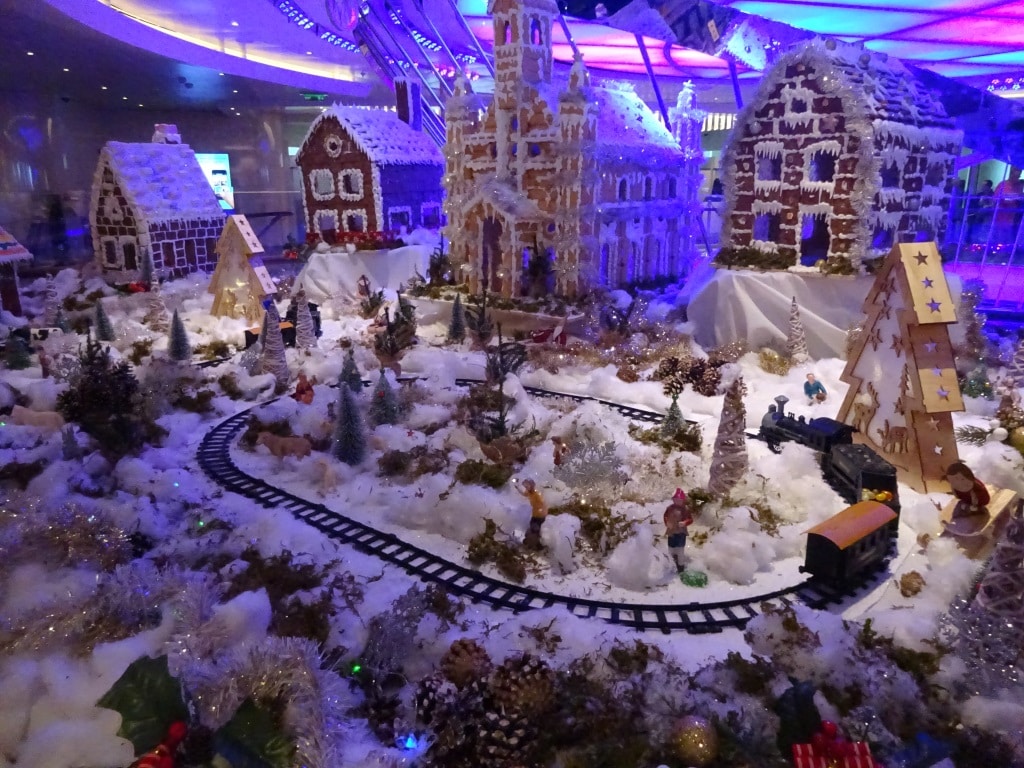 This is the magical piece of Christmas nostalgia which the Pastry Department on board has created. This is only part of the whole display. It is about double the size, including two trains. Setup outside the Grand Dutch Café for all to admire.