Today I returned to the high seas and this time it was the Veendam. The Lords of Change had decided that no change was needed to my schedule and I could stick to my planned schedule. So Veendam it is.  If the schedule will remain unchanged is anybody’s question.   The port of Boston was full today with the Veendam, the Zuiderdam and the Grandeur of the Seas in port together. These three took up the whole of the long berth of the Falcon Cruise terminal and gave my taxi driver a headache because of trying to find out which Gate was the right one to drop me off. The building of the Terminal is so high that from the street you cannot see what ship is on the other side, let alone where the stern stops and the bow starts.  But with the help of a friendly policeman, the ships agent was found and I was taken behind the security gates.

It was good to see my old ship back again; I was captain on her from 2004 to 2008 and had since then only visited sporadically. So now we are back for three weeks, for training, auditing, creating a bit of mayhem with drills and offering words of wisdom (when asked………………). As the winter is coming to the East Coast, the Veendam is on a cruise from Montreal down to Fort Lauderdale and will then start a Tran’s canal cruise to San Diego. When we arrive there on November 5th. it will also be the end of my period on board, unless things change.  It is a short of snowbird migration that is going on, as the Zuiderdam, on a 12 day cruise from Quebec is doing the same thing. She also will end up in Fort Lauderdale to commence her winter season.

After Boston, we will visit New York on the 17th. Charleston on the 19th. and then Fort Lauderdale on the 21st. As Boston is a handy port for flights, we had a small crew change over today and that will take some of the pressure away in Fort Lauderdale when the regular crew large change over takes place. The more we can spread out those crew changes the better it is for the continuity on board and the least the guests will notice the change. 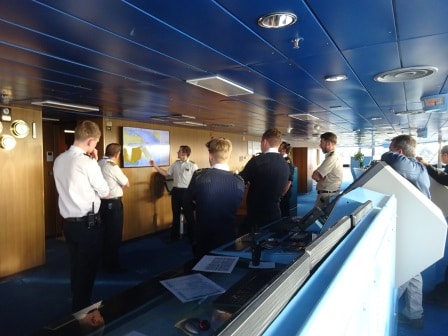 Staff Captain Andrew Barker briefing the team for departure. The Captain is the 2nd one on the left, the local pilot is on the far right, leaning on the radar console.

The good ship Veendam is under the command of Capt. Noel Driscoll who has been around since 1999 and his first ship was the Veendam as well, so he has come full circle so to speak. He originates from Ireland and he is one of a few of the Irish Officers we took on in the mists of time who stayed the course and settled down at Holland America.

The rest of the Deck officers are roughly of the 50 – 50 percent mix between British and Dutch. Through the years the company has figured out that the two groups together enhance each other and push the mutual quality of the whole group up to a higher level. As one of my colleagues once said, we teach the Dutch how to speak proper English and they teach us common sense. (Or was it the other way around???) 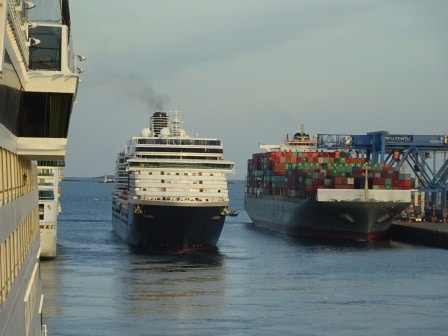 The Zuiderdam going astern with a container ship on the portside and the Grandeur of the Seas on the starboard side.

The Falcon cruise terminal has an excellent location, being close to downtown and not too far away from the Airport; but has one set back and that its fairway to get in and out is rather small. If there are three cruise ships in line and a container ship at the berth at the other side, then there is not much room left, especially if it blows from the wrong direction. Today we had very little wind but still the Veendam had to wait for 30 minutes until the Zuiderdam had pulled out and gone astern before she could follow.  We needed a little bit of the Zuiderdams docking space before we also could go sideways and into the middle of the channel. Boston has approval for a $300 million port dredging plan and the money has been allocated on federal and state level but they have to wait until the person has been found who will really write the cheque. Last night I heard a Lady on the local TV saying that this might be within the next two years.  So until that time, the mud will decide other departure sequence.

Tomorrow we are at sea, sailing at a slow speed to the Port of New York where we will arrive on the 17th. The weather is getting chillier but is supposed to remain good, and a bit of a chill in the air will reduce the chance of “very low hanging clouds” and that is a definite bonus.