Today we spent a quiet day at sea, with very nice weather although it felt a bit windy at times. But that is more or less caused by the relative wind on deck. The ship is only making about 10 knots of speed and the wind is only blowing at about 10 knots of wind velocity but they are at times opposite to each other and then the combined relative wind on deck is 20 knots. That is considered a Fresh Breeze in sailors jargon and it feels real ”fresh”  as it is a cold and nippy wind, winter is definitely on its way. Hence we are getting away from the area. 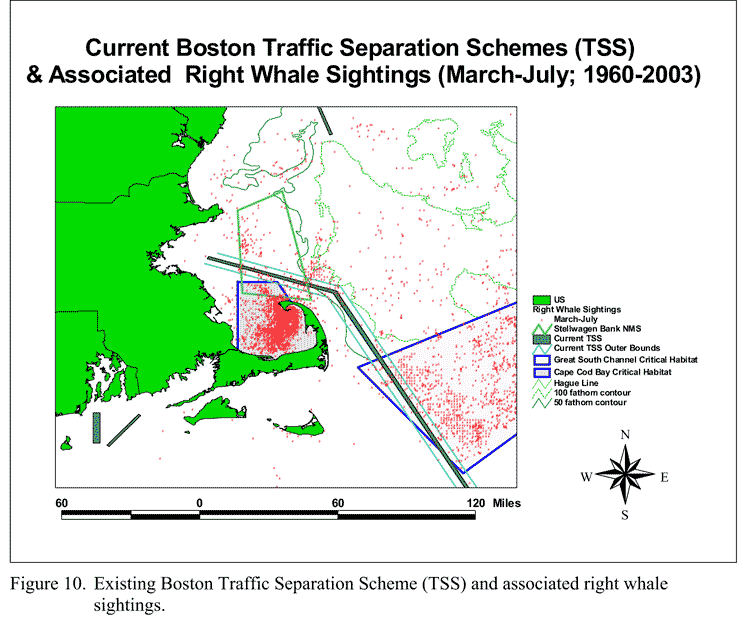 Information with plotted sightings until 2003. Not much has changed since then. The green angled line to the lower right hand side is the vessel traffic separation scheme, which all ships have to follow when going south from Boston. Diagram courtesy NOAA

Making only 10 knots of speed has two reasons, first if we go full speed, we arrive in New York in the middle of the night and then we are alongside until dawn with hardly anybody going ashore. (Except some crew of course) The 2nd and much more important reason are the Right Whales. All the way from Boston, to Nantucket Island and then partly towards New York, we are sailing through their habitat. With a fair chance of hitting one of them if we go too fast.

The Right whale is one of the more peculiar ones among all the whale species out there. They tend to be completely oblivious of what is going on around them. The Humpback whale, which we encounter very frequently, reacts to engine sounds and vibration and will dive. So as long as we keep a good look out and change course on time, we do not have any issues with them and they not with us.

The Right whale does not do that, it just sits, floats and plays around regardless what happens around it. According to scientists, the mating rituals are different to other whales as well as they seem to engage in group sex; and people (with experience) say that when you are involved with that nobody seems to pay any attention to anything else anymore.  Because they do not take any notice of the outside world, they were a very easy prey for the Whalers in the old days and as a result there are only about 400 left. And with all the protection in place the population is not growing very much.

Apart from that we do not want to lose any of them, we cannot afford to lose any of them as they are very close to extinction, whatever their mating rituals might be. So the ships have to keep a very good look out and go slow to have time to see them when they are floating around, as they are far less active than a Humpback which tends to put up a show whenever they can. To see the Right Whales you need time and thus we go slow.

To help with this we all have speed rules in the conservation area’s and the USCG maintains a listening, reporting and advise station outside the Boston area where they collect all the data and make announcements of where the last sightings have been. And there is a Vessel Traffic Separation scheme which insures that all ships follow the same “highway at sea” and thus reduce the chances of an close encounter. 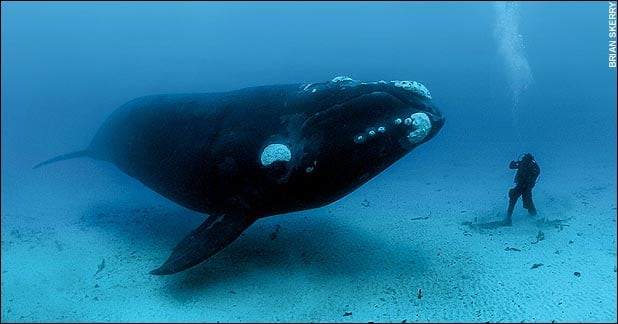 If you see them, then they are easily recognizable with the white callosities on the head area. Photo by Brian Skerry. Courtesy of www.whaleman.org

Because they move so little and there are so few we seldom see them and thus each sighting is important. We keep the ship on hand steering where needed so we can change course without delay and at all times one officer and one quartermaster keep a sharp lookout while the 2nd quartermaster is behind the wheel and the other officer looks after the navigation. When sightings come in we even bump up the number of officers by adding a Sr. Officer to the team for oversight.

We do not have to go slow everywhere but it is of course much easier to schedule the ship for a slow run between two ports instead of putting the Captain under pressure of having to make up speed as soon as the ship is outside whale waters.

With that speed of 10 knots we will arrive at 04.00 hrs. tomorrow morning at the Sandy Hook pilot station and from there sail up the Hudson. At 05.30 we will pass under the Verrazano Bridge and will dock around 06.30 at Pier 88 in New York. There we will stay until 16.00 hrs. Weather is looking good, with partly cloudy skies and temperatures in the high fifties. We will be in port with the Carnival Sunshine which has New York as a turn over port for making her last Canada & New England cruise.