We are running away from the nasty storm that passed us far to the north. But they say the sting is in the tail and the tail just got us. The wave field came down a bit further and because we were past it already, the waves were now coming behind us. When the swell hits a ship either on the port quarter or the starboard quarter, then it can develop a cork screw motion; so the ship starts to yaw. It is not a completely regular moment as it depends when and under which angle the following swell will catch the ship and lift it up or let it go down. How much the ship is affected depends on how much speed the swell/wave has and also how fast the ship travels. In principle the ship could go at the optimum speed and would ride the waves, or better said, surf the waves and there would be no movement at all. But as the velocity of the waves is seldom constant (normally there is interference from other waves) it is nearly impossible to make that work. But we are running away from the wave field and thus the ships motion already started to come down around lunch time, the accompanying wind, started to abate as well and we should really enter very quiet waters now.  As the captain said during the voyage from the bridge, this is very good weather for December, and I can only agree with him.

The wave picture of today. You can see how much the wave field has spread out, and as we were expecting a few days ago that we would just skirt the edge of it, we are now somewhat inside it. But it will not for long. (Courtesy www.stormsurf.com)

This means that the ship can count on a normal crossing for the remaining days and we are heading for a 03.30 arrival at the pilot station on the morning of the 19th. That is quite early and we will be together with the Caribbean Princess and the Costa Deliziosa. Around those three Queens of the Seas is a whole slew of cargo ships going in and out and then we had better be early than too late. On top of that we will have our first USCG inspection. Of those there are two each year but this is a special one as it is the first time as the ship is entering a US port for the first time ever.

The USCG inspectors will arrive at 08.00 hrs.  and will stay all day long until just before departure as they will also want to witness the Guest Boat drill. The ship will also have a full CBP crew inspection as it is also the first time the NSDM crew comes into an USA port. These full inspections take place every 90 days and require a face to face verification of crew member against passport. The CBP normally starts with a cruise ship inspection after 06.00 hrs. and thus it helps if the Nieuw Statendam is fully ready by 06.00 hrs. It will take a while for all 1000 crew to get through and in the meantime leaving guests will have breakfast and then disembark, the ship will have a turn over to get ready for the new guests and all the activities of a regular turn over day will take place. 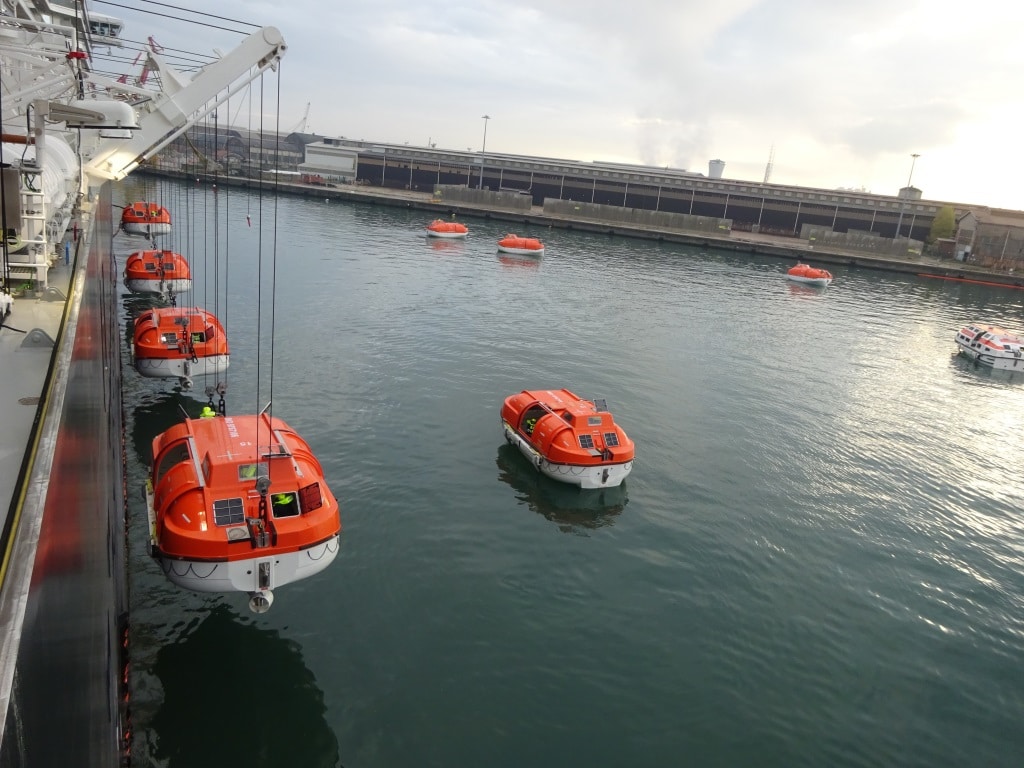 Crew boat drill. All starboard side lifeboats are being lowered in the shipyard during trainings. The boats go down in alternating sequence so they will not sail into each other when sailing away. From the moment the captain orders “abandon ship” we have 30 minutes to get everybody inside and the boat into the water.

And then as soon as all the disembarking guests are off, the famous moment of the zero count, the USCG will want to see a full emergency drill, Fire, mustering, and abandon ship; all the legally required routines. So the turn over activities will dramatically slow down while all 1000 crew will be on hand to show the USCG that they are fully proficient in their duties. I will not be involved as I have to “help” with the zero count. Because I hop from ship to ship, traveling over USA soil (most of the time crossing the dock from one side to the other) I have a special Visa that allows me to do so. Normal crew has a visa that just allows them to travel to ship – straight in, and then leave the ship—straight out. That does not work for me, so I have another sort of Visa which allows me the freedom to travel from ship to ship inside the USA. But that Visa means that I am not regarded by the CBP as a crew member, I am considered a non-revenue Pax. And thus I have to disembark with the Guests in the morning, so the ship can reach the zero count as quickly as possible. 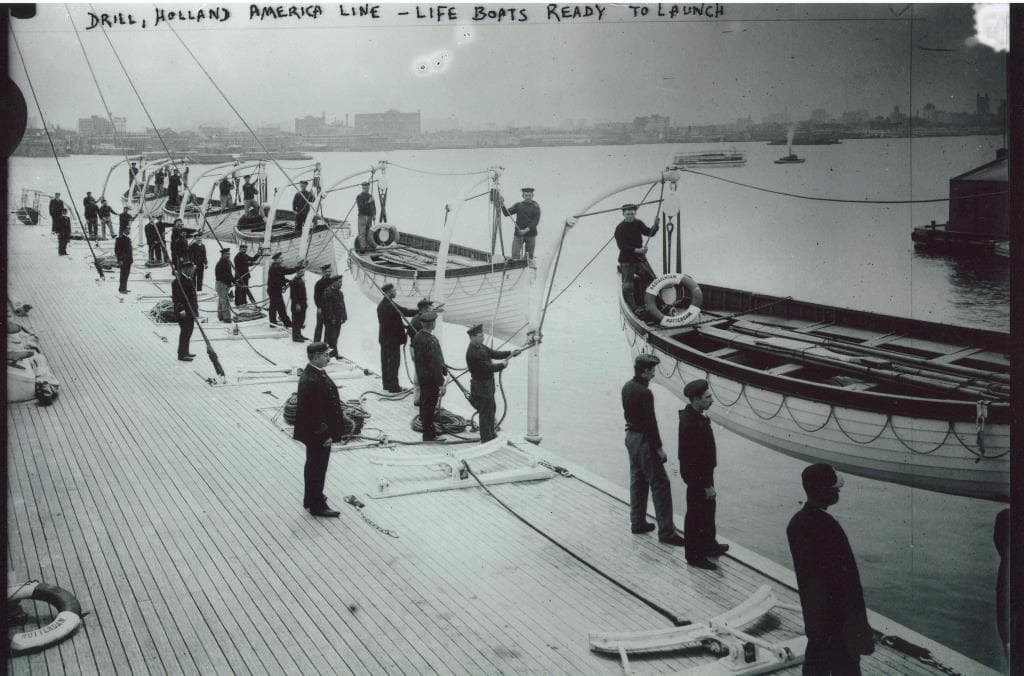 Holland America has being doing boat drills for a very long time. This is a drill on board the ss Statendam (I) around the turn of the century. We had the lifeboats so we exercised but in the days before the Titanic the rules were not so strict, hence it was not required for the crew to wear life jackets, or safety harnesses against falling over the side.  (Own collection)

After the drill, the USCG inspectors will want to see all the safety equipment. See if all watertight doors are closing and if all the fire screen doors are closing etc. etc. And that will take all day. For a big ship, there is normally a group of about 8 or more who will attend. They are very good in working with the ship to ensure that the guests can still sail on time and normally that works out very well. So behind the scenes the crew is preparing and refreshing their memory from the pre sailing drills in Italy and all will be ready.

But we still have 16, 17 and 18 December to go and the last few days of the crossing promise to be very good. But then the past 5 days since we started the crossing from Malaga have not been bad either; certainly not for December.