As promised by the weather forecast, the wind and swell out there indeed abated. The wind shifted from the West (the very last tail of the storm system) to the South East (the beginning of the Trade winds) and is now behind us but it is not blowing very strongly. Swell can only die down when the wind abates and when that happened in the early morning the swell came down as well a few hours later. Out there the ocean is still not flat (whenever have you seen an ocean that is flat?) but we are now down to the long low rolling low swell of a North Atlantic at its most tranquil.  We still see the occasional white cap, indicating that we have winds somewhere between 3 and 4 Beaufort and that is also normal North Atlantic weather. If you get real calm weather in this area, when the winds are completely becalmed and the seas look oily, then you better brace yourself as that indicates that “silence before the storm”. 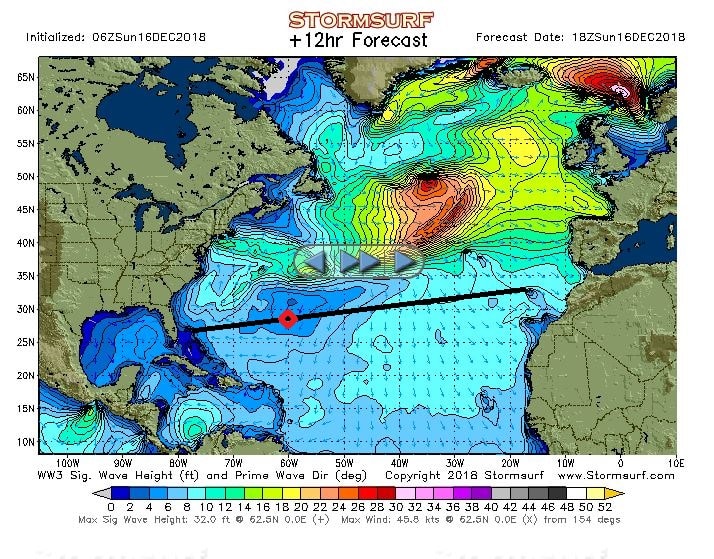 The wave/ swell chart for today. Look at all that nice blue. As long as that green stuff near Cape Hatteras is not coming down we will have flat calm weather all the way to Florida. 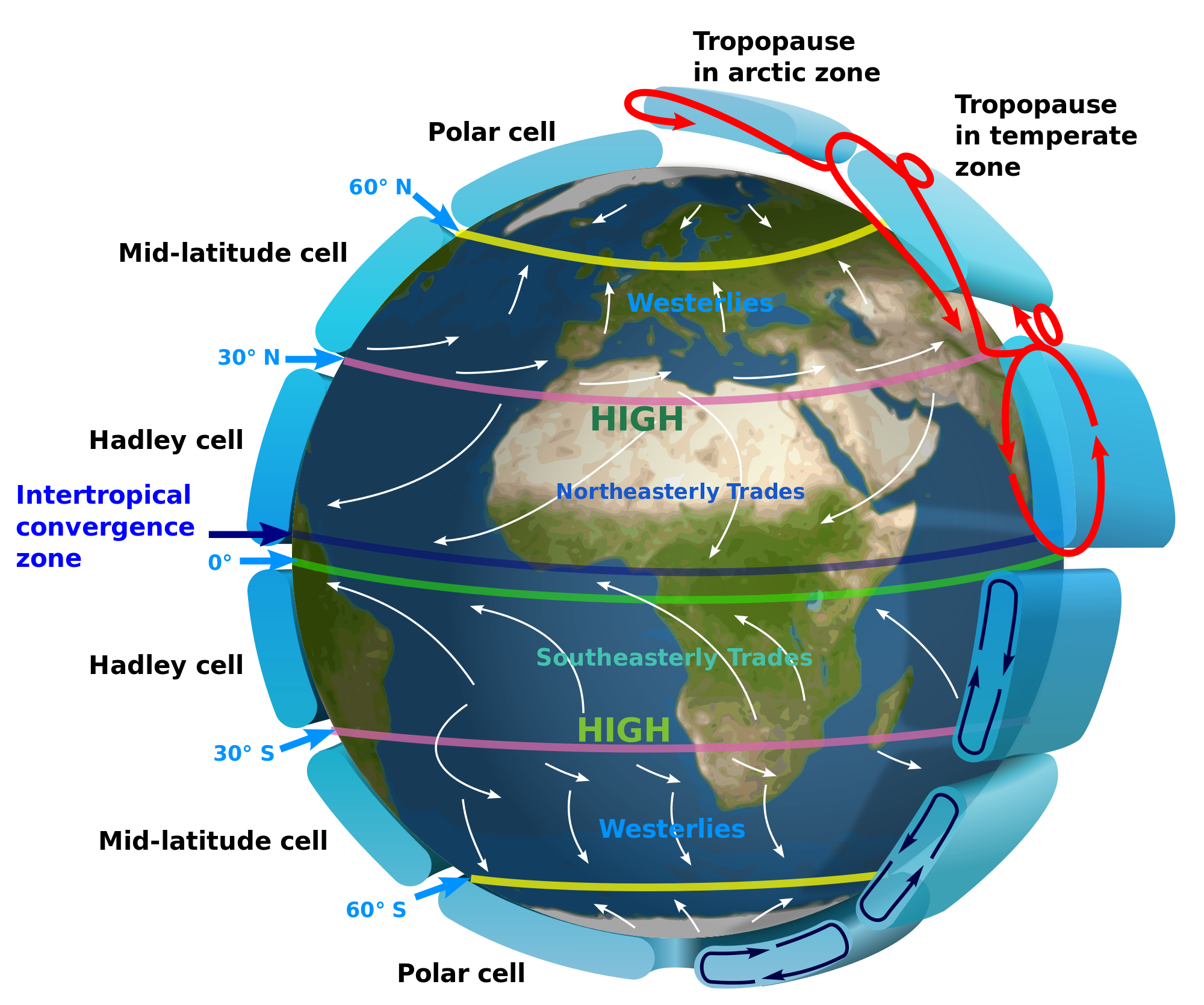 The worlds wind system. As you can see it all curves west ward at the equator. Thank you NOAA.

But let’s first look at the bad weather and swells. Most people will have heard about the roaring forties, furious fifties and screaming sixties. Names out of the good old days of the Tall ship sailing. These names refer to the sea areas in the southern hemisphere between 40/50, 50/60 and 60/70 degrees Latitude. Here the vast open ocean spaces let winds build up unhindered and push the swells up very high and that could make life very unpleasant for the men of steel on their ships of wood. While there is some land in the North (Iceland, Greenland) to the south it is all wide open all the way to Antarctica. That is the reason that there are no cruise ships down there in the northern summer time (which is the southern winter time)

All this wind is blowing in area’s close and closer to the poles. Around the equator things are more benign and that is caused by the inter tropical convergence zone. This area around the equator is also known as the doldrums. The North East Trade winds and the south East trade winds cancel each other out. The old time sailors were not happy in the screaming sixties because the wind blew their sails to shreds, they were also not happy here as the sails did not catch any wind and they would drift around aimlessly. Sometimes for months if they were unlucky. 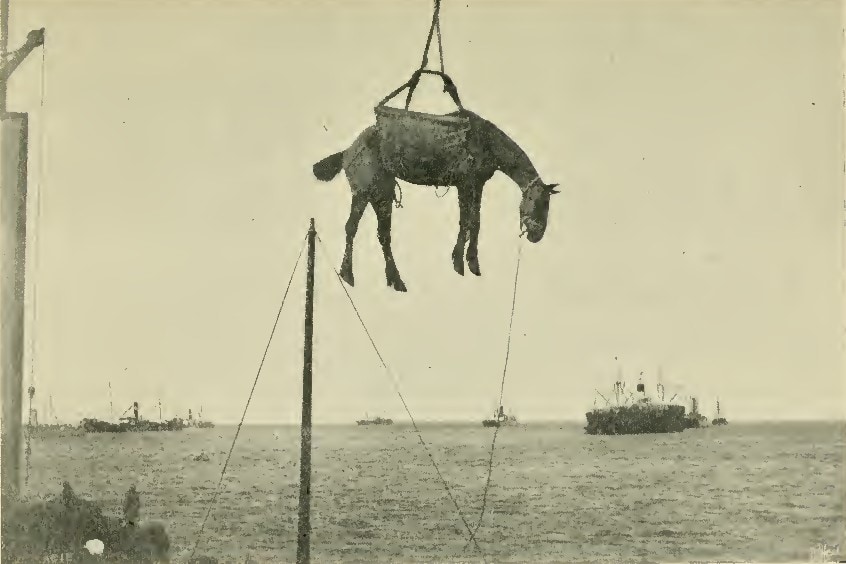 A rather undignified way of landing a noble animal.

Did the men of steel from those days gone by also have a name for this as well: Yes, they called them the Horse Latitudes. Because when a sailing ship would be becalmed here for a long time and fresh water supplies would run low, the first things that would be killed off to reduce water consumption would be any horses that were on board, bound for the new world. And sailing ships used to carry a lot of horses for the armies in the new world. Some were even landed in the Caribbean. The main port of Aruba at Oranjestad is called Paardenbaai, or Bay of Horses, where they used to come ashore. 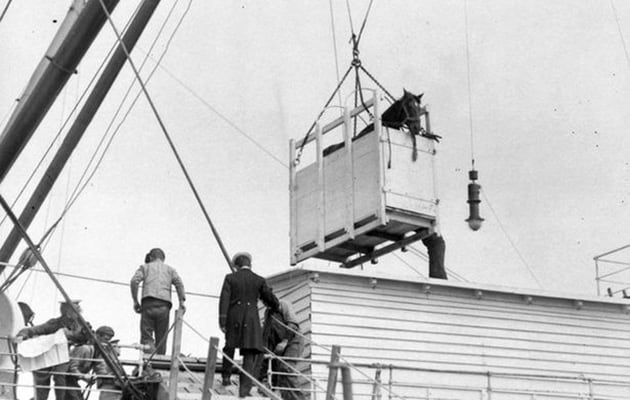 But very often horses went by box. an early form of containerization.

We are now just touching the Northern edge of the North East Trade winds and this is a planetary wind which means it blows all year around from the same direction. Where does this wind come from? Well the storm system that went past us to the north for the last few days is moving East pushed by the jet stream on the higher levels. But while doing so, it also displaces air ahead of it and that air/pressure is deflecting down, and then flows back West at a lower latitude. Hence the area we are now entering always has this wind coming from the Sahara area and ending up in the Caribbean. 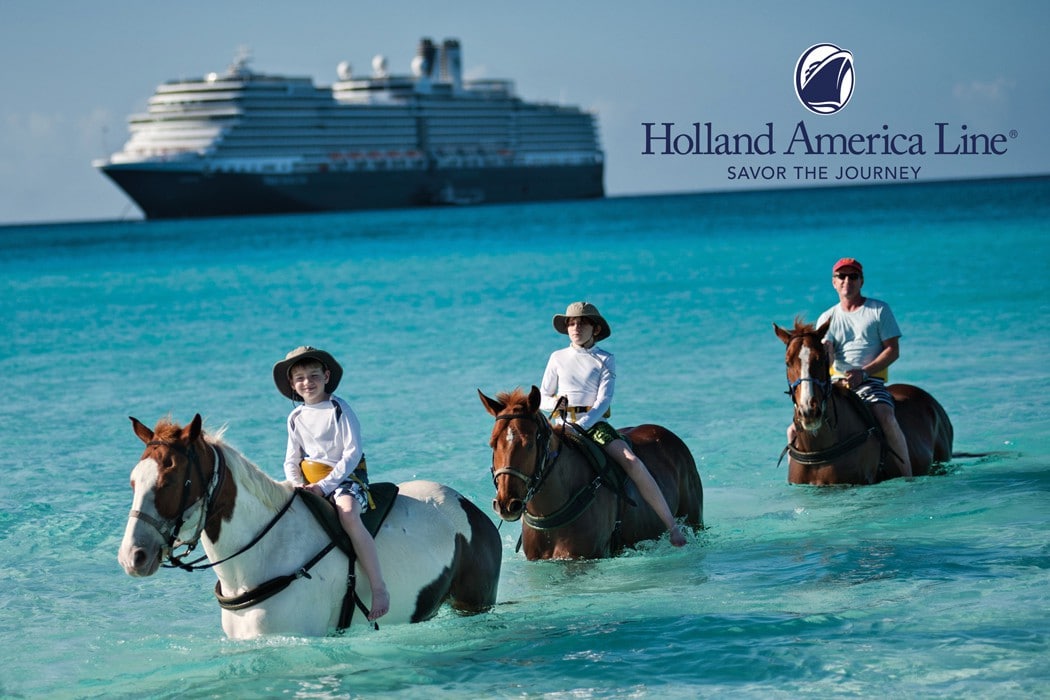 Holland America Horses, seen here at Half Moon Cay, came the posh way. They walked ashore from a landing craft and live in their own hurricane proof horse shelter. The ship in the background is the ms Eurodam. (Courtesy Holland America Line)

That makes taking the southerly route in the winter so ideal. You avoid the North Atlantic storms, and you get some wind and current in the back while in the Trade Wind Area. Why do we like the more northern crossing in the summer? Unless the cruise schedule calls for Madeira or the Cape Verdes, it is a shorter route and we get a considerable push from the Gulf Stream.

Also we now get a nice push from the elements; I do not think our guests are in a hurry to get home early as the weather is now turning our Trans-Atlantic into a Caribbean Cruise.