Sailing today through some gorgeous Caribbean weather, the way things should be. Late this morning we left the Straits of Florida behind us and curved around Cabo San Antonio into the Caribbean Sea. While in the Straits of Florida we had the current against us, although by hugging the coast of Cuba it was not much as the axis of the Gulf Stream was much more to the North. Then we sailed around  Cabo which we could only see on the Radar as there is a Vessel Traffic Separation scheme around the Cape which is designed to keep the ships apart. We are southbound and thus we have the downward lane to the west, far away from land, while the northbound ships have the upward lane to the East.  In the past ships tried to cut the corners here, sometimes with alarming results and in the late 70’s some wise people at the IMO (International Maritime Organization ) decided to put highways at sea in to keep the opposing flows separate. Not only here but at most bottle necks around the world. Once around the corner we headed on a South Easterly course into the Carib and now we have both wind and current against us. But eventually after we turn around at Ocho Rios we have it all behind us all the time.

There is not much else to say about this area apart from that the water is deep, blue and there is nothing around us as the triangle of water here between Mexico, Cuba and Grand Cayman is just empty sea.

So today a little bit of history about an item that is not very often in the spotlight. The Children’s cruise activities. On Holland America and most other cruise Lines, the Youth Centre is tucked away somewhere unobtrusively near the top of the ship. You really have to search for it to find it. I was there a few days ago for training and while talking to the Youth Coordinator Samantha and her colleague I suddenly realized that we had, had Youth Centers for a long time; only in the grey mists of time they were called Children’s playrooms. Most of the time one for first class and one for second class if it was a larger ship. 3rd or Tourist class did not get the service, they had to sort things out themselves. 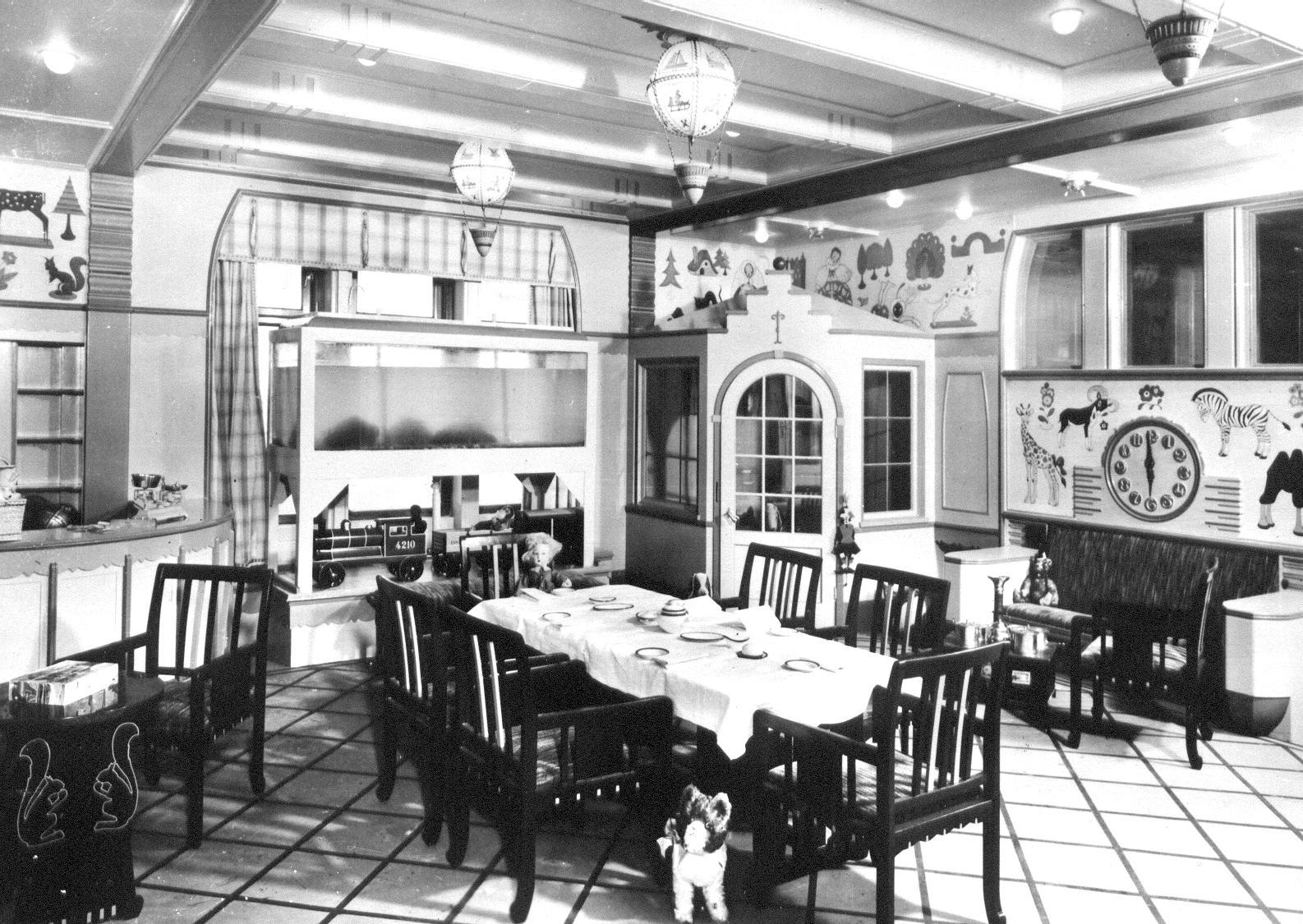 First Class Playroom on the ss Statendam (III) of 1929. Note  the way the table is set. Children had proper Tea served while in there.

Our first dedicated Children’s playroom was built on the Statendam of 1929. This was part of the drive by Holland America to provide more and more service to the passengers. Something it had to do because the other companies were building larger ships and were doing the same thing. Before that time the passengers had to look after their own kids, unless they had a nanny with them.   The Statendam burnt out in 1940 during the invasion of the Netherlands and then we had to wait until 1958 until there was another dedicated playroom on board  the ss Rotterdam.  This playroom was dominated by a Wall mural which showed the Pied Piper and Hameln. The ss Rotterdam is still out here, now as a hotel in Rotterdam and the mural is hanging near the Lido Restaurant. The playroom itself is long gone. 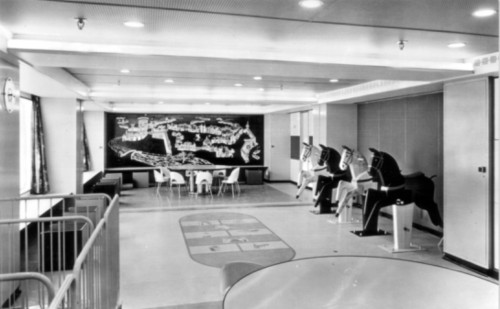 The first class playroom on the ss Rotterdam (V) of 1958. One combined room for all groups of childeren, although I have ban told that the focus was on toddlers not on teens. The Lady’s working here were fully qualified nurses in the early years.  (See the mural at the far end, a color photo is included below at the end of this blog)

In the early 80’s the new ships Nieuw Amsterdam and Noordam did not have dedicated children’s playrooms but there were Youth Counselors as the company had now founded Club Hal.  They used a multipurpose room on Boat deck which they had to share with arts and crafts and which turned into a night club in the evening.  When there were large groups of children on board, there was often an overflow into other public rooms which were occupied by bridge players and that gave some friction to say the least. 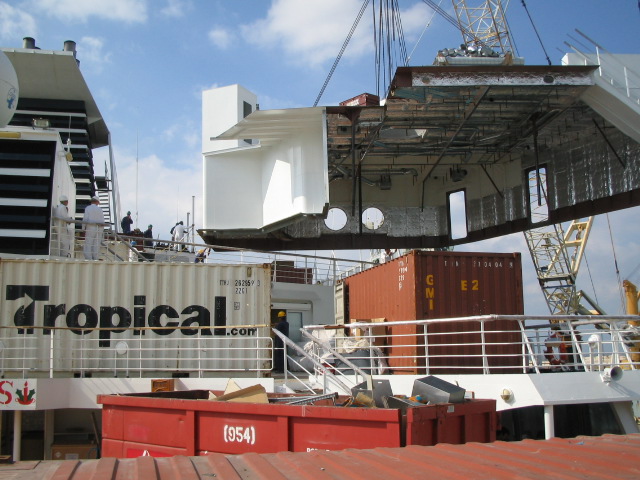 2005 the ms Veendam receives its Club Hal Centre. The steel surround is hoisted on board by the dry dock crane. Photo by yours truly as I was captain of the Veendam during this period..

As Holland America did not carry that many children in the 1980’s, senior management was a bit reluctant to assign ships space for this purpose. But then they created a small space behind the funnel on the Ms Maasdam exclusively for Club Hal activities. It worked very well but it was too small and it was also realized that you need to offer different activities to different age groups. Hence the S class was retrofitted with larger premises, including the Veendam who received in 2005 a complete new housing behind the bridge.  With the arrival of the Vista Class, the Signature Class and now the Pinnacle Class the space has only been made larger and larger. Necessary as these ships carry more guests, but also as on the shorter cruises the average age of our guests is coming down and that means more children. Depending on the number of children, the company puts more Club Hal Staff on board. Normally there are two youth Staff but during thanksgiving and Christmas cruises the number is increased in relation to the number of children coming on board. 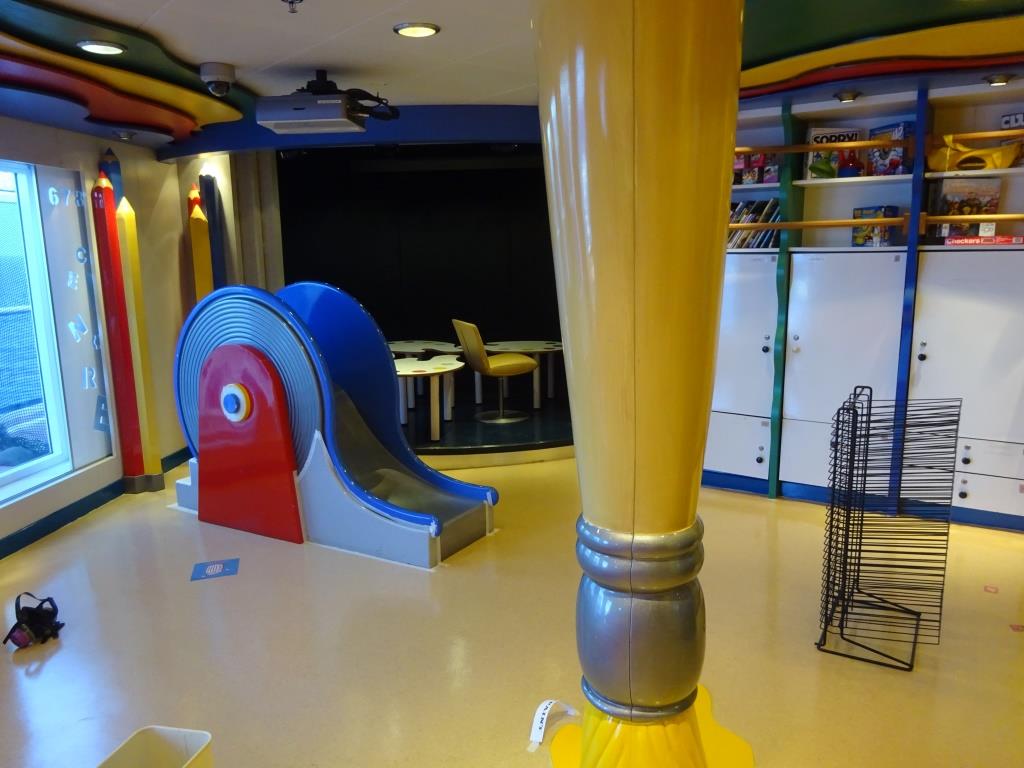 One corner of the toddler side. The area was not in use today, so I could take the photo. Therefore also the wet paint sign on the floor as the Bo’sun grabbed the chance to give everything a fresh coat of paint as the wear and tear  here is quite high.

Do the kids like our Club Hal? I can only look at it from the outside but not too long ago I observed a family who decided to have dinner in the Lido every evening at the same time as I do, so as soon as it opens. They had two children, I guess between 5 and 9.   This was what happened:

Embarkation day:  inspected Club HAL ………. Have to wear wristbands – do not want to do that, not cool, not going.

First day at sea:   They had been there most of the day but had met kids with funny accents.

Second Sea day:    Scavenger hunt and pizza party.  Parents upset as the kids do not want to stay for dinner, but want to go back.

Last sea day, (parents were eating each night in the lido as they did not want to dress up for formal) Major tantrums going on as the kids wanted to go in the dining room as all their Club Hal friends were going. Kids promised, we go the last night.   Next tantrum about booking next cruise, some parents of the other kids had already booked their next cruise, so now networking was going on and WHEN DO WE GO.   I do not know how this was solved…………………………. but it is one of the ways Holland America gets its repeat cruisers…………………

Last port day before disembarking: I did not see the family so they must have gone to the diningroom.

Tomorrow we are in Grand Cayman: Weather Sunny, 82oF / 28oC moderate breeze. We are at anchorage 4 which is the closest to the town, so all is well in the world. 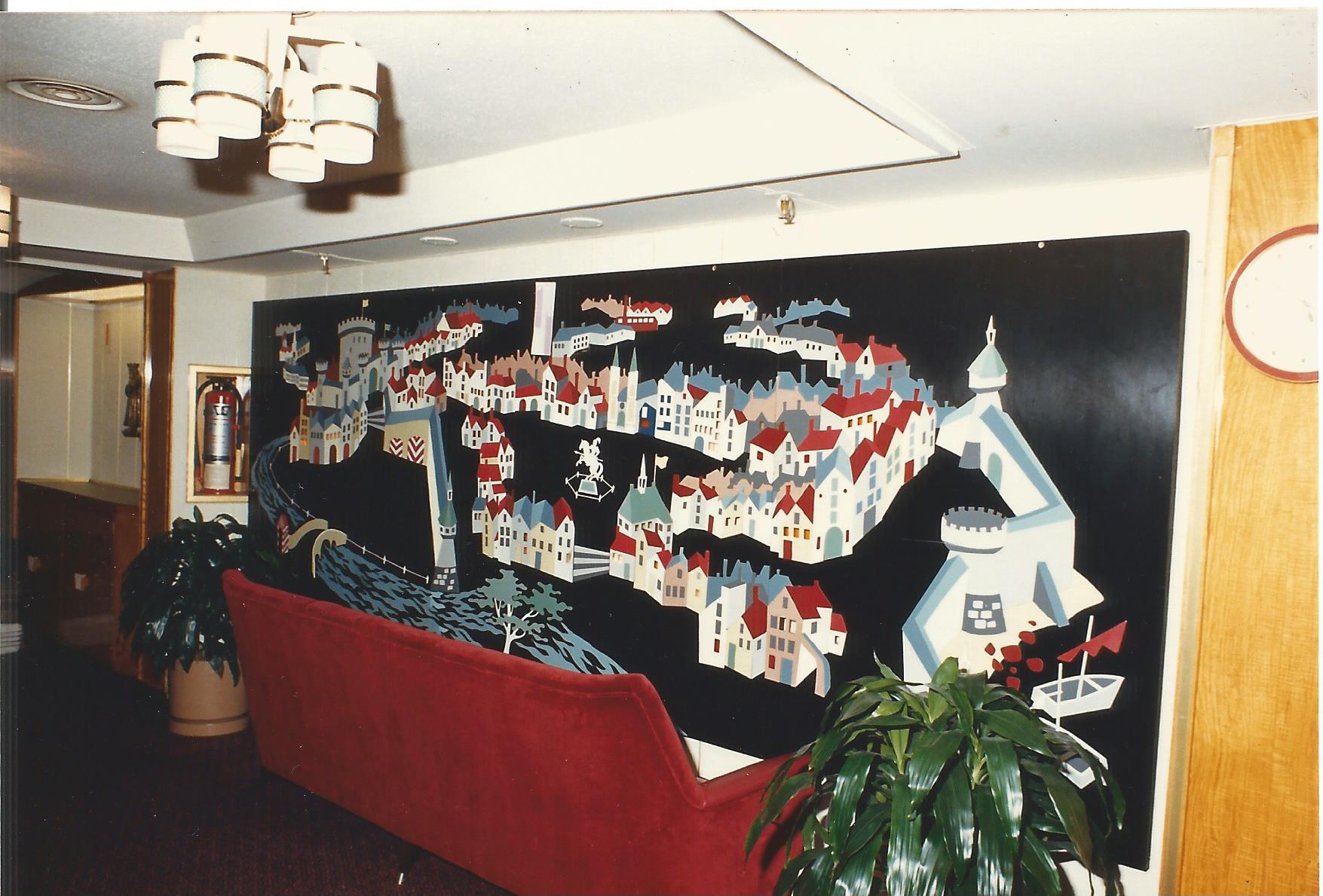 Caribbean, Cruises of the Past, ms Veendam