By 8 am. we were docked at the Navy Pier, this is the most southern pier of the 3 piers in Key West. On the B pier we had the Norwegian Sky and there was nobody at Mallory Pier, which must have pleased the visitors as they like an open view from Mallory Square. It would have been possible to dock the Veendam at Mallory but it would have been very tight as the Norwegian Sky is quite a long ship.  Thus the bow of the Veendam would almost have been inside the hotel on the corner to make it possible. Hence the better solution is to be at the Navy Pier where there is plenty of room. The negative part is that the Navy Pier is a long way away from down town, and you are not allowed to walk on the pier as it is still a working Navy/USCG pier.

That has been solved by having little trains go up and down the pier. I was advised this morning that they now do not stop just at the entrance to the pier but take you a little bit further into downtown. If so, then that would be a very nice service for those who do not run the 100 yards in 10 seconds anymore.  For the crew it is a bit more of a hassle, time wise, as right next to Mallory square there is a good drug store which sees a considerable amount of revenue coming from the crew who race ashore during break time to pick up some essentials. They can do that as well in Fort Lauderdale but that still entails taking a shuttle to get out of the port; but if you are at Mallory then it is less than a 5 minute walk from the ship. 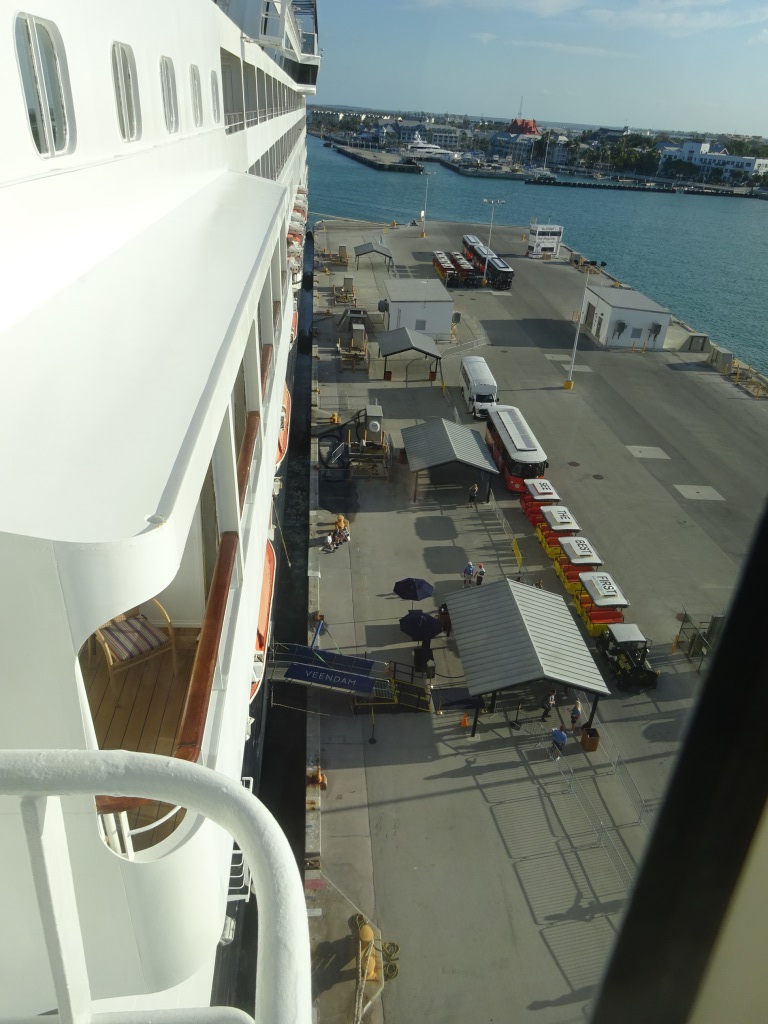 Today I was examining the sailors in their tender driving proficiency for the coming European Season. On these cruises we have very little need for our tenders as in Half Moon Cay, there are shore tenders available and the same is the case in Grand Cayman.  We still us our own tenders there if it is a busy day. Like Yesterday on the 12th. When a whole row of mega liners put 16000+ cruise guests ashore. Tomorrow there are no ships scheduled at all and when we arrive on the 15th there are only three including us (Total 6179 guests expected) and with three ships the tender capacity of the shore tenders is more than enough. Still the tenders shall be manned with competent sailors and hence we do the refresher training and the examination. I still have a few to go in Ocho Rios, but thus far I am very pleased with the results.

Key West is not an ideal port for tender training, or maybe it is, as the seas are very rough. Not because of the weather but because of all the traffic that goes in and out of the port. Water sports, fishing and jet skis are very popular here and constantly on the move. And constantly causing swell, while we are docking and undocking at the tender platform. Then there are a number of large sailing ships which potter around the port. They do not create swell but they can be in the way. A distraction for the drivers but at the same time a good training to develop their situational awareness. Thus while the tender driver steers, the helper is also keeping a very good look out, to catch those boats and “floating contraptions” that come up from behind.  Then there is the USCG and Navy with speed boats, cutters and other fast craft and all together it creates an exciting time for a tender driver under exam. 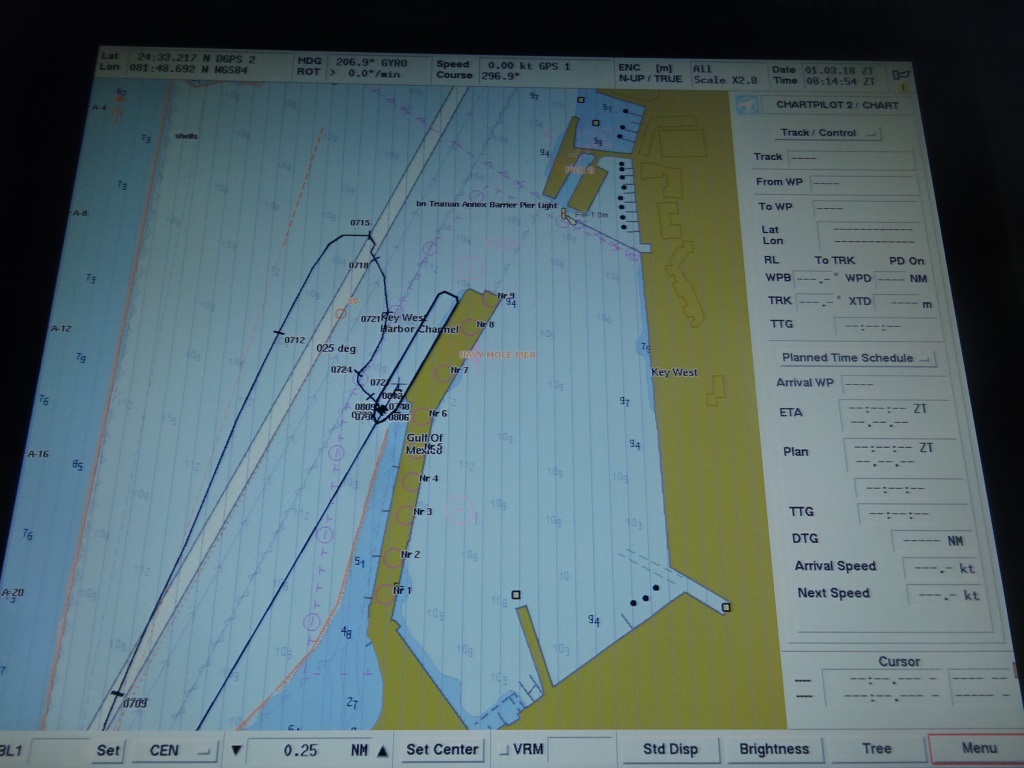 The Navy Pier. The ship has swung around in the middle of the channel, put the nose in the channel and forces its way slowly to the dock while pushing away the water between ship and dock.

What most guests do not see is that there is so much current running up and down the port along the cruise ship docks. And that current can go up to three knots. That does not sound much but 3 knots of current is about the same as 30 knots of wind impact on a ship. Why so much, because the port is so shallow. At some places we only have 10 feet under the keel and then the current cannot easily flow under the ship, but has to go around it. Currents do not like that and so it pushes against the ship. That makes docking sometimes a long and tedious affair, as once you have the ship in position, with the nose or the stern straight into the current, you then have to go sideways to the dock while all that water is being pushed around your ship and thus creates a natural buffer.

The captain decided to dock this morning with the nose outwards, so the bow faced the incoming flood current but then going sideways for about 80 meters to the dock took still quite some time. This afternoon when we sail, we only have to open up the stern a little bit, e.g. create a gap between the stern and the dock, and the ebb current will at once get in between and will push the ship away from the dock. As a sort of free-of-charge tugboat.

Once out of the buoyed channel we will sail south towards Cabo San Antonio, trying to find a course where we have as little of the Gulf Stream current against us. So a sea day tomorrow and then we are in Grand Cayman.