The weather remained the same and thus I could say when I arrived on the bridge at 04.15, we are going to make this call. As I had promised the guests I did arrive bright and early and by 06.00 we had the tender service in full swing. Unfortunately not too many guests decided to go ashore bright and early, which was a pity as the earlier you go, the cooler it is. Of course it is not a metropolis or a beehive of activity so the main reason to go here, is “to have been there” and to admire the scenery and the local way of living.  As a result the facilities for cruise ships are not that the best in the world. It is not as if you are driving into the parking lot of Wal-Mart. One old pier with one little step was made available to us and so going ashore and coming back took some time. 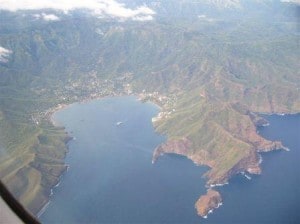 Nuku Hiva Bay from the Air. (Courtesy from the internet)

Huku Hiva is a horse shoe bay and thus sheltered from the west, north and south. While outside it was blowing a good 25 knots, inside there was nothing more than a gentle breeze.  As a result it is a stopover for many yachts and small ships so they can take a breath (read —— a good night’s sleep away from the pounding of the boat on the ocean swell).

Nice for them but not for me, as I found a Korean fishing Boat right on my designated anchorage. The bay is not controlled by the harbormaster and thus everybody drops their anchor down where ever they want.  There was no need to sit for this small fishing vessel on a deep sea anchorage but it is a safe one, being right on the 10 meter line and having 3 cables (3/10th of mile) swinging space all around. So I had to stay a bit further out but as it was a good day it did not matter. 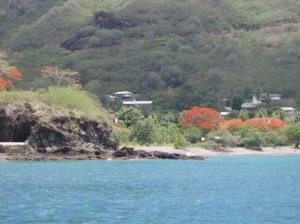 With the invasion of Nuku Hiva being in full swing, my thoughts were already on the crossing back home again. We will have 7 glorious sea days to look forward to and TEAM Statendam will be trying to make sure that they are seven glorious days. I wrote about that already yesterday.  My foremost task is now to get the ship safely back on time with as little inconvenience as possible. The weather looks quite good for the coming days.

I am just a little bit concerned about a wave field coming in after the 18th. which is day four of the crossing.  It has been horrible weather between Hawaii and San Diego (The guests on the Zaandam must have had some un-comfortable moments, as that ship is sailing there at the moment) and the wave field generated by the storm is still spreading southwards. It is unclear if it will reach our track line as that will all depend how long the winds will be blowing to the North. 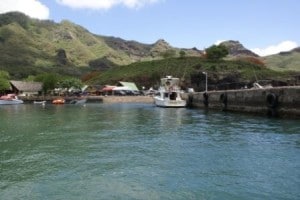 Approaching the tender dock. You can not have a more South Sea setting like this. (Photo Courtesy; Mrs. Liz Mauk)

My plan is to stay on full speed until I can slow down and still arrive in San Diego on time. Better a little bit of ships movement now than a lot of pounding later.  The wave field might dissipate on time and then we can still have a smooth ride home.

So plan A was executed on departure. By the time we came out of the bay and rounding the South East point we were on full sea speed, 19.5 knots on the engines and about 18.5 over the ground as we will be battling against the South Equatorial Current all the time. When we went towards Hawaii we had the North Equatorial current in our back (it is basically the same current but it runs north of the equator, instead of south) now it is against us.  That will remain the case until the day before San Diego, when there is normally a counter current that gives us a nice push in the back again.

The crew is buzzing about the Village Fair tomorrow and there will be some interesting stands out there. Deck has setup something with pirates and walking the plank, the engineers have something technical of course and my Lord and Master Lesley has gotten all the spouses on board together with a stand, to guess the collective age of all the ladies on board.

We are on the way to San Diego and we have to cover 2,840 miles to do so.  Arriving there on 21 dec. It is time to start unpacking the Christmas trees.