Once the captain had made up his mind that he could make it to Brest before the storm would arrive, all engines were put on line and the ms Rotterdam raced over the ocean with a speed of over 23 knots. The Rotterdam is the fastest ship in our fleet and also one of the fastest cruise ships or ocean liners out there. We made it well ahead of the storm and we were tucked away timely in the old shipyard of Brest. It was nice to see the Dutch name “Damen” on a large shed on the dockside. Once the new building yard disappeared from Brest, the Dutch shipyard consortium Damen took part of the yard over for ship repairs and related as it has a 420 meter long pier (that is where we are) and a dry dock of the same length with a width of 70 meters. This means it can handle the largest ships. In the past it did so, having on occasion the largest oil tankers in the world coming. The French oil company ELF built three of those between 1976 and 1979, each over 500.000 tons and they had to dry dock on occasion as well. Brest with its deep water port was ideal for handling them.  All the larger cruise ships are parked at this dock as downtown can only take smaller ships with little draft. 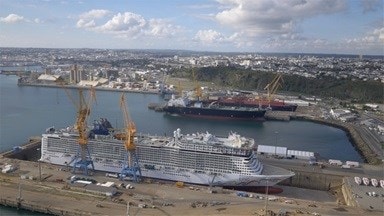 To give an idea about the scale. this shows the Norwegian Epic in dock and that is one of the big cruise ships out there. And she is not in the biggest graving dock. We were alongside where the black hulled cargo ship is.

The storm came over right on schedule. The wind breezed up to 26 knots around 6 am. (our planned docking time) and that would have made it very dubious whether we still would had been able to dock. In the course of the morning the rain clouds came followed by winds of over 50 knots. That is called a violent storm and those speeds are edging close to hurricane winds or force 12. The sort of winds you can lean into without falling over.  So the decision to go for an early arrival was a very good one, otherwise we would have had to spend a (bumpy) day at sea. The nearest sheltered alternative port is Cherbourg, where we are going tomorrow, It is also that 14 hrs. away and that means that we would have arrived in the late afternoon.  Thus this was much better. The town had laid on a very efficient shuttle bus system with bendy buses which stopped at 3 drop off points in town. Still a lot of guests stayed on board, not willing to brave the inclement weather. For those there were four little stands on the dockside selling local specialties and several Ladies sent out their Knights in Shining Armor to get the cookies and some other local things, while remaining themselves safely out of the wind. 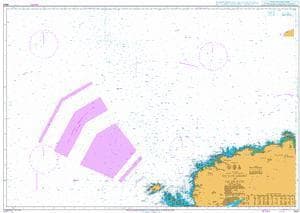 At the west side of Brittany is Isle Ouessant. Ships have always tried to cut the corner here, but no more. Now you follow the “highway at Sea” further out.

The distance to Cherbourg is about 245 Nautical miles and the ms Rotterdam has to fly again tonight to make that schedule. Because of some oil spill and other shipping disasters in the past the ships cannot hug the shore line any more, unless you are really local traffic, and thus we have to go further out and follow the Vessel Traffic Separation Schemes (VTSS) which keeps everybody at a safe distance from the rocks. There is even a special VTSS for tankers, which keeps them even further away from the rocks. Understandable and well appreciated but it does make the journey quite a bit longer.

Cherbourg has a safe and deep water harbor and is very much sheltered from the westerly winds, such as the one we had today. That makes the port a favorite port for a plan B. And they do get a lot of extra business from that plan B. Especially from the ships that have to cancel Guernsey and/or Jersey. If you arrive at Guernsey at 7 am. and observe that there is too much swell at the anchorage (the anchorage is only well protected from winds from the west and south west) then with full ahead you can be docked at Cherbourg around 10 am. The locals are completely geared up for this, and they get tour buses, shuttle buses and authorities all lined up in that 4 hour time window. I have not experienced many other ports who can do that.

The Ocean Liner Terminal in Cherbourg. In the 1930’s the large ocean liners used to leave from here.

Tomorrow we will arrive at 07.00 hrs. but I wonder how many people I will see when I go for breakfast at 06.30, as we will have a wobbly night while sailing along the coast of Britany. The storm today has whipped up the waves considerably. I am looking forward to Cherbourg as we are docking at the old North Atlantic passenger terminal which the French in a very nice way have converted into a Museum with a Titanic exhibition and a nuclear submarine. But it also has (at least last time it was still there) a nautical bookshop.  For one who lives in England it is very hard to get French books (even via amazon) so if the books do not want to come to me then I will have to go to the books.

Weather: chilly and overcast with a good chance of rain. Temperatures 120C / 54oF but very little wind.