Today we had the silence before the storm. We are expecting a lot of wind tomorrow and the captain has decided to go pedal to the metal to Brest and dock as early as possible. If not then there would be a good chance that we would arrive together with the storm and then we would have had to cancel the port call. In agreement with the local authorities the current” read” on the weather is that if we are safely docked before 04.00 hrs. we should be ok. So the ms Rotterdam is aiming for the Brest pilot just after 2 am and to be all fast before 3 am. And then it can blow as much as it wants. 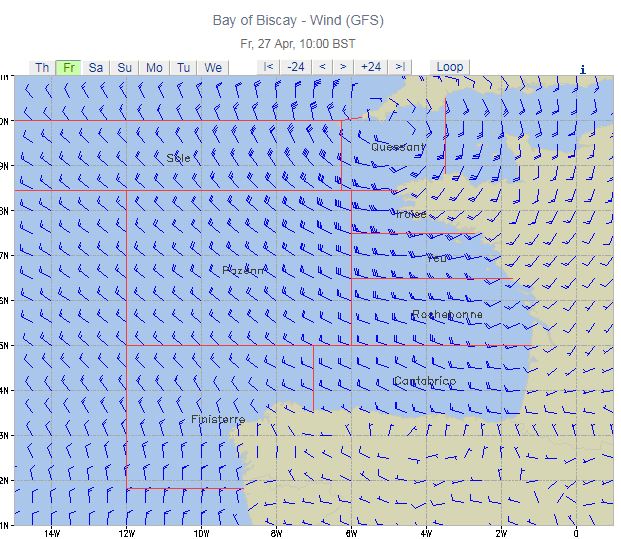 The wind is increasing while the system is slowly moving into the English Channel.

At this moment (1600 hrs. GMT) the depression is slowly approaching and is about 450 miles away from the French coast. The first strong winds are expecting to hit Brest around 04.00 hrs. and then the worst is expected between 10.00 hrs. – 15.00 hrs. with 40 knots wind gusts from the West. After that is should diminish very fast. 40 knots of wind is not a big deal for a ship to be in while at sea or while safely tied up in port but it is too much to have it blowing that hard when you want to dock. Hence our early arrival. And by the time we leave around 17.00 hrs. the wind should be manageable again.  Then we sail to Cherbourg and there we should have a nearly wind free visit. The “silence after the storm”. 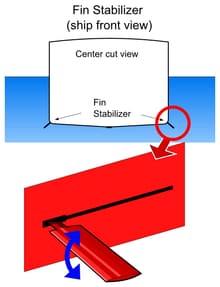 Same as today; the Bay of Biscay is nearly wind free. Just a slight ripple lies over the waves and the under laying swell. The ship is moving a little bit and the stabilizers are getting a very good workout. There is a long rolling swell coming in from the North West. From the part of the North Atlantic Ocean where depression after depression is still moving from Cape Hatteras to Northern Europe.  We have about 3 meters running and it is a long running swell, nearly full on the beam and the stabilizers are not always able to cope with every movement. That has nothing to do with the quality of the stabilizers which we have here on board the Rotterdam but the principles of the system.

Stabilizers are controlled by a gyroscopic system. A gyroscopic (basically a fast turning ball) works on the principle that a fast spinning ball is always trying to settle on a flat horizon. Because of this you can use it to measure the difference between that artificial horizon and the angle that the ship has in relation to it. Once measured you can send a signal to two stabilizers or four, (The Queen Mary 2 has two sets due to the weight of the ship, the ms Rotterdam has one set) and they then counter act the rolling motion.

They create lift in same way an airplane extends its wings for taking off or landing. Apply that lift opposite to the way the ship is rolling and you can reduce the roll. But as the gyroscope has to sense the angle and then send a signal to the stabilizers it is always slightly running behind the facts. Also if there is suddenly an extra high or low wave hitting the ship, it will react to it after it has measured the angle and then let the stabilizers go to work. They are hydraulic and that takes time as well. 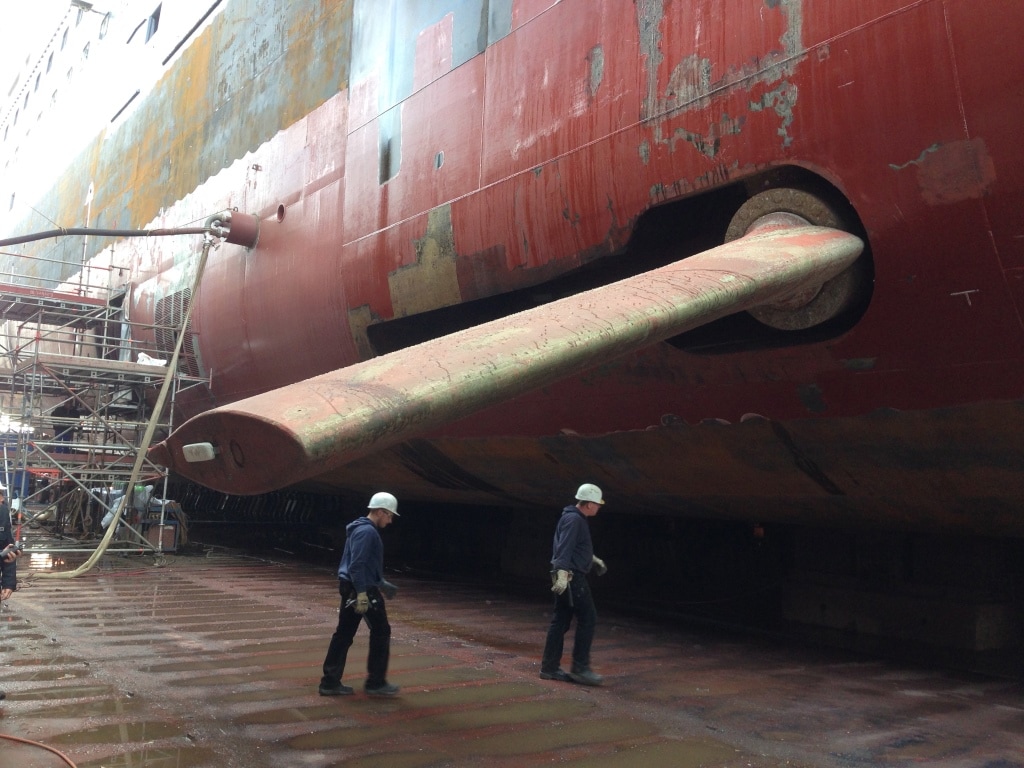 The stabilizer of the ms Rotterdam. Seen here in drydock in 2015 before it was painted,

Based on this concept the stabilizers establish a sort of average working mode against the regular movement = rolling of the ship =. Hence it is considered to do good work if the dampens out 90% of the roll caused by the waves. If the ship would roll 5 degrees without, then the movement will be reduced by 90% to about 0.5 degrees. An unexpected higher wave will throw the system off a little bit until that movement is taken into account for the averaging.

The first stabilizers were proposed in the 1930’s but they showed up on the first passengers ships in 1951. The Media and the Parthia of Cunard, passenger – cargo liners were the first to have them installed, more as a test than anything else. But it worked very well. Then it very quickly became a standard feature of all the new ocean liners and cruise ships built. 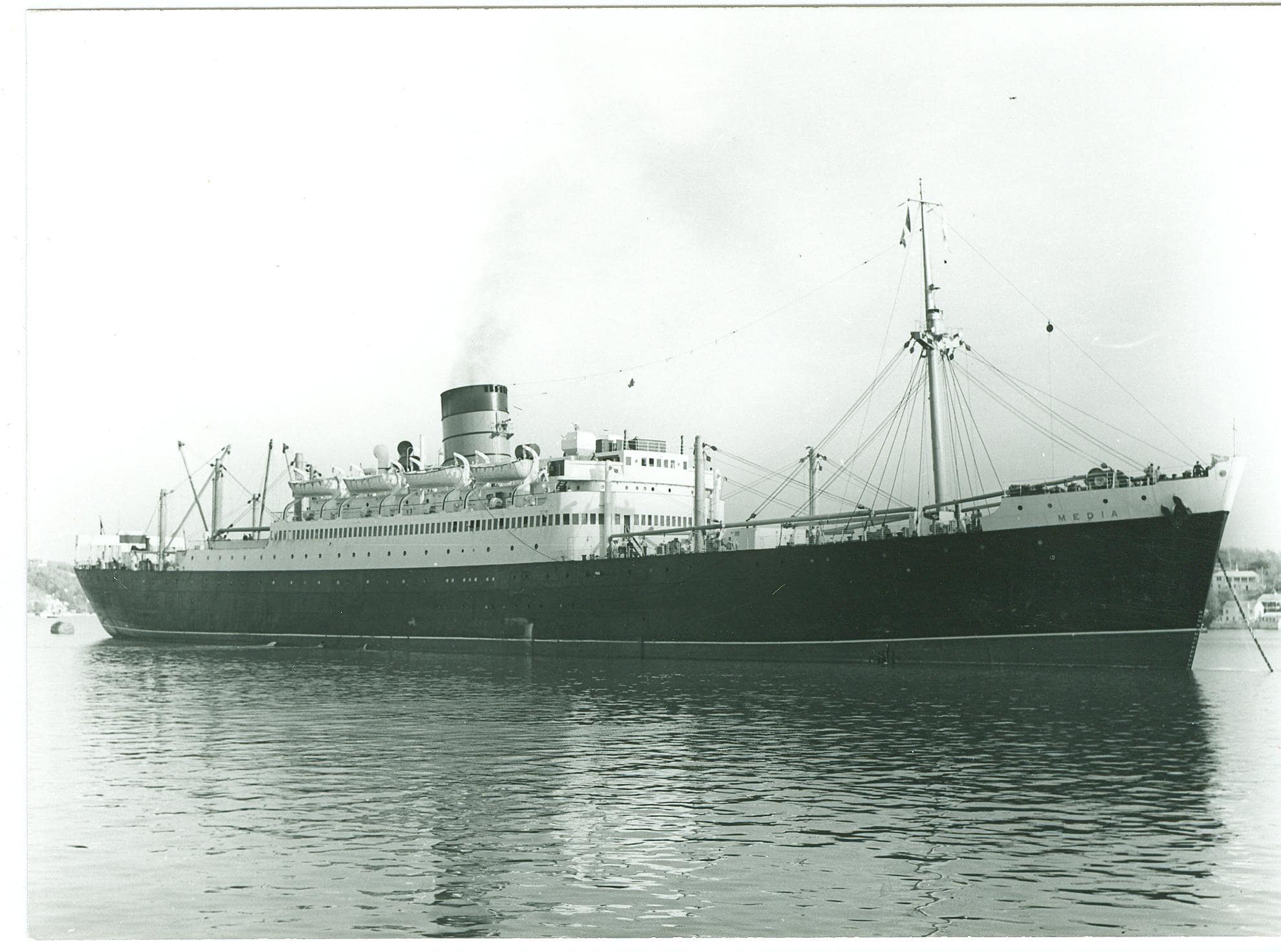 I do not think we had a single ill guest on board because of the movement as all the activities going today were choc-a –bloc with people. Even Rummi-Cub was standing room only and that is considered a minor event among all that is going on.

In the meantime the good ship ms Rotterdam is racing through a quiet Bay of Biscay with an average speed of 23 knots. It is doing so on a more or less straight course and the more or less is caused by whales who are getting in the way. Luckily they are not in large groups and thus the navigators can easily dodge them.

Tomorrow we are in Brest and it will be a windy day with quite a bit of rain in the planning as well.