On departure from Brest the Captain announced that we could expect some wobbly weather and some ships movement. And indeed 45 minutes after departure, when the ms Rotterdam pushed her nose into the North Atlantic Ocean, we took a few waves full on the bow and then moved about for a while. Then it became less and less until it was almost gone by 9 pm.  During a walk through the ship I had to go to great pains to explain to a few guests, why it the ship was moving in the first place and why it stopped moving in the course of the evening.  Well it all had to do with sailing around Brittany. 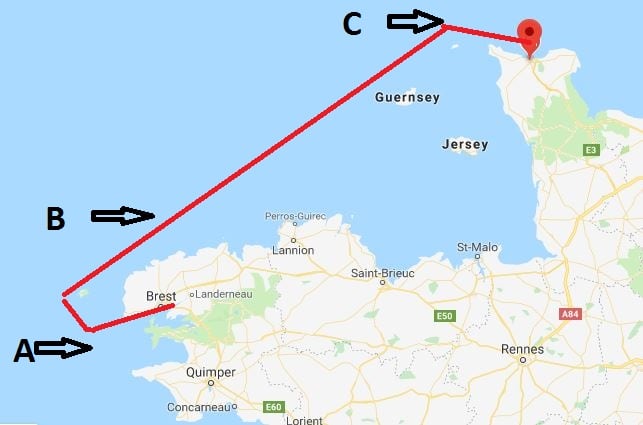 Our route from Brest to Cherbourg.

It all has to do with the way the swells are hitting the ship. When we left the port (see A) the swells generated by the storm (12 – 14 feet) were hitting the bow. That makes the bow go up and down and that is what we call pitching. The worst form is when the bow is lifted completely out of the water and then slams with an almighty bang back on the waves. That costs a lot of speed and thus ships often slow down to make it more comfortable and also as by on average they do not gain any extra mileage by keeping the slamming going. We were lucky because we were going to the North. So by 18.30 the ship had already made a nice course change to the North West and the ships motion was now between pitching and rolling. The stabilizers were doing their best and apart from the occasional lurch or sway, the ships movement greatly subsided. (See A to B)

We had even more luck because of the direction of the swells. By the time we turned to the North East (See B to C) we had the swell on the side and the stabilizers could take care. Why were we lucky? If the swell had been on the port quarter (half between the stern and the port side) then we would have experienced a cork screw motion. Then the ship not just rolls, or just pitches but does something in between which looks the way your laundry acts in the washing machine when the spin cycle changes. (If you have a front loader you will understand what I mean) This movement is very un-pleasant as it is hard to predict. We have that on all cruise ships that sail towards the Panama Canal when they are above Columbia. Here the swell generated by Trade Winds catch all the ships on the Starboard quarter and then they “corkscrew” all the way to Panama. Once we were above the top of Brittany (See C) we got the swell in the back but as the ship was sailing faster than the swell was running, the swell could not lift the stern up and the ship sort of surf boarded from there to the pilot station. 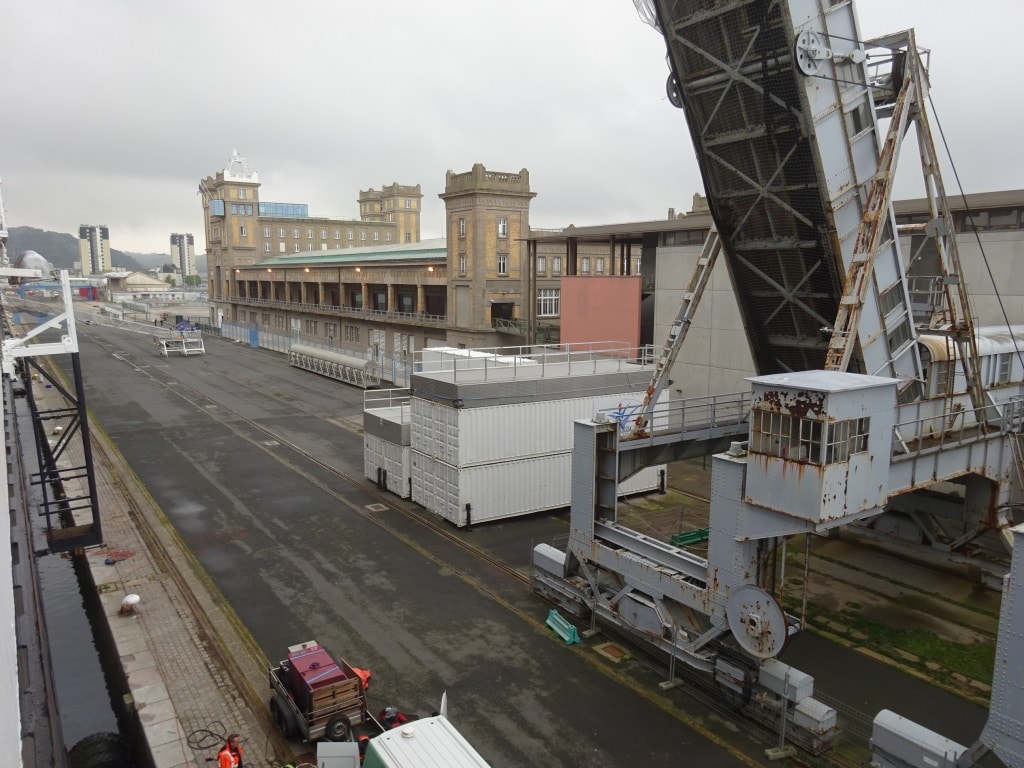 The Gare Maritime Trans Atlantique. The grey contraption to the right is the old gangway system on a rail track which would provide a direct connection to the terminal. Now we use shore gangways on platforms. Long gangways as the tide is considerable here in Cherbourg.

Cherbourg was still there; so were we happily docked shortly after 06.30 am., at the Cruise Terminal formerly the Gare Maritime Trans Atlantique.  It is now called the La Cite de la Mer with its Titanic (*) exhibition, its nuclear submarine and deep sea exploration Museum with a plethora of submarines and other submersibles.  It was a miserable rainy day and although the port had laid on a shuttle bus system to down town, a lot of guests opted for visiting the Musea in the terminal. A sort of disappointment was that the guests could not walk across the original shore gangways anymore and straight into the luggage hall of the 1930’s. The shore gangways have been condemned and need a lot of repairs and it looks like the luggage hall has not been morphed into the museum part. 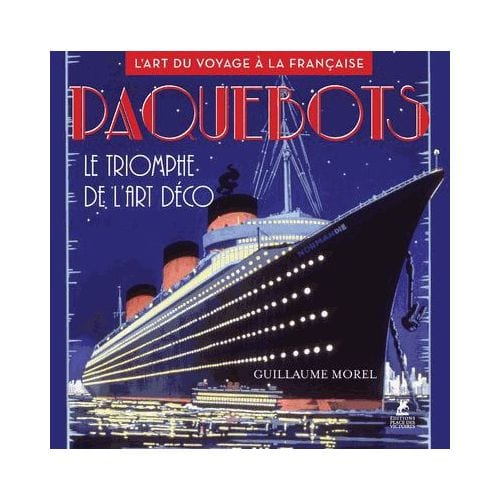 I visited the bookshop which has expanded its book collection quite a bit (and that in the age of the internet) and they made my day. They had four books that I was looking for and had not been able to obtain via that same internet. (And they were cheaper than expected so that made by Dutch heart sing………) One book is really IT by normal book standards as it describes the great interiors of the Art Deco ocean liners of the 1930’s, such as the Normandie and others. Art Deco is my favorite art style and this book is a picture book. But one of those coffee table books you sit down with, with a good glass of wine in the hand, and just enjoy what those craftsmen and artists created in those days. I am enormously proud about Holland America Line but we never went over the top with the interiors the way the French did. I suppose we were “too Dutch for that”.

Tomorrow we are in Zeebrugge, gateway port to Flemish Belgium and cities such as Bruges and Brussel. Weather: Overcast with a chance of rain and temperatures around 52o F /12oC and a bit of wind in the afternoon.

(*) After leaving Southampton on 10 April 1912, Titanic called at Cherbourg in France and Queenstown (now Cobh) in Ireland before heading west to New York.

This is what we call Grand Art Deco; opulent and over the top. Tomorrow a photo of what Holland America Line did in the 1930’s.