The season is now coming into full swing. This week the last cruise ship will arrive to make up the full complement of regulars for the summer. Today we had four ships in Vancouver and that will remain more or less the same in each port.  3 in Juneau, 4 in Skagway and 4 in Ketchikan. The Zaandam is starting the run up to Seward, which we will join next cruise as the alternating ship. So this evening she will sail to Ketchikan while we go to Juneau one more time as the first port of call. This week our buddy will be the Norwegian Pearl which we will see in Juneau, Skagway, Glacier Bay and Ketchikan.  Then we will lose her as she is becoming a Seattle based ship. This means that by next week it will be quieter in Vancouver on a Sunday with only two ships in port, the Statendam and the Celebrity Century.  Vancouver lost some ships to Seattle this summer and also there are now some ships calling on Friday and that distributes the load a little bit. I believe the shift to Seattle has more to do with the domestic flight arrangements that are available if you stay inside the US than with the attractiveness, or lack of it, of Vancouver. It remains a great city to visit and to sail from. 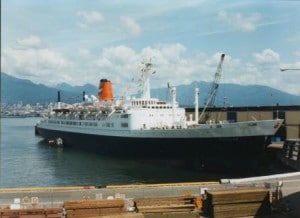 The old Statendam in aug 1982 with yours truly on board. Docked at Ballentyne East which is no longer part of the cruise area. Handy dock though, just opposite China Town. 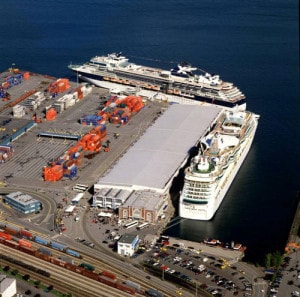 Ballentyne Pier as it is now. The old gate in the front is a left over from the Canadian Pacific days.

Then Canada Place was constructed as part of the Expo 86 happening and two cruise ships and a small 3rd one could then be handled at this cruise terminal which also included the Pan Pacific hotel, but soon it was too small but Ballentyne remained in use as a cruise terminal. Later on Canada Place was extended which made it possible to dock one really large ship on the East side and two smaller ones at the West side and that is the situation that we have now. Ballentyne can take two more ships, so the regular capacity of Vancouver is five good size ships on one day.

By the mid 80’s this all started to be redeveloped and now Canada Place is surrounded by other high rises and apartment buildings that make up the new sea front. Nicer to look at than a train shunting yard, but it was the end of an era when Canadian Pacific came to an end as a shipping company that had reached from the Far East, all across Canada and all the way to England. 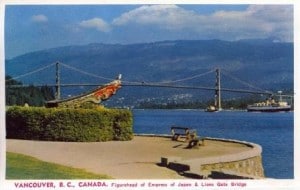 From a old postcard. I think this is still the original figure head of the Empress of Japan. On the right one of the CPR Princess ferries that ran up and down the coast.

Some reminders are still there and one of those is the large hotel that is still in operation. World famous is of course Chateau Frontenac in Quebec, but there is also a smaller version in downtown Vancouver. I was told that you could see this hotel, which is standing right in downtown, from the docks in the days when the plane was not considered a travel option over the ocean.  Another reminder is the bow figure of the Empress of Japan which is on display in Stanley Park. I see it every time when we sail towards Canada Place. It is a replica as the original fell apart long time ago.

We had a bit of a rainy and chilly day today, while over 1300 guests joined the ship. Still we managed to pull out on time and then a whole procession lined up towards Seymour Narrows.  We have a late tide again, going through around 01.30 in the morning. After that it will be pedal to the metal again for Alaska.

The weather is a mixed bag in the coming days. Overcast most of the time with wind and haze in Queen Charlotte Sound. In the Inside passage it should be wind still and clear, so at least I will have something to look at, while I spend from midnight to until 06.00 on the bridge.

It was good to see Missed Career at Sea on the dock again.