With the tide at Seymour Narrows being as it is, it is a late night affair and nothing we can do about it. Slack water at the Narrows dictates our lives. Four ships lives to be precise. Thus after departing from Vancouver, the whole convoy trundled up Georgia Strait towards the magic moment of –near slack tide–. The Norwegian Pearl, followed by the Celebrity Century, followed by the Zaandam, followed by us. Everybody lining up in regards to the rush they were in and the speed they were planning to do after the Narrows. For us that meant that eventually we would overtake the Zaandam again as they would later run at a lower speed for a timely arrival in Ketchikan, which is closer than Juneau. This we did at 05.00 in the morning and then we left the Zaandam far behind as we were racing up the coast. The weather in the inside passage was really nice. Flat calm seas and a pitch dark night, showing all the ships lit up against the sky as if it was Carnival in Venice. Cruise ships, tug and tows, fishing boats, lighthouses and buoys all twinkling in the night. At times like this I do not find it too bad that I have to stay up all the night to sail the ship through.

Queen Charlotte Sound was very wobbly but after lunch time we turned fully to the north and then the swell came in on the stern. Swell and wind giving extra speed and reducing the ships motion. Late in the evening the wind and swell greatly diminished and that will stay the same until we enter the Alaskan Inside Passage.  That will be at Cape Decision, where we will enter Chatham Strait. Then we get high mountain ridges on either side causing a funnel wind to start. Pushing the winds up from 10 to 25 knots or more. Following wind, so nothing to worry about for us. 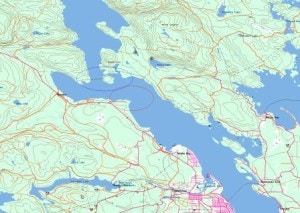 The blue circle is Seymour Narrows, the red circle is Race Point.

A lot of people have discovered that living along the Inside Passage is not such a bad thing to do. So the islands outside Vancouver are dotted by permanent or semi permanent housing but also further up on the main shore it is the case.  Seymour Narrows, with Menzies Bay, is just north of Campbell River and I think that that is the best spot to be.

If you are on the Race Point side of Menzies Bay, you can see all the cruise ships sailing by, almost in your front garden, going in & out of the Narrows. One house on top of Race Point is my favorite. It was erected about 10 years ago at this Race Point around which all the cruise ships have to make a turn. You cannot get any closer. Plus it looks a Grand house as well, taking the size into consideration.

It looks like they even built an overhang to get closer to the ships. Or is it for fishing?? There is only one but….to this location. Right in front of it is Race Point Navigational light which shines brightly green night and day.  No doubt they have it well shielded on the back but I would not be amazed if the light still spills over. On “very low cloud” days, it will color the whole world green by the reflection against the haze.

Once you are passed Seymour Narrows, civilization tapers off quickly. There is the camper and fishing resort of Brown Bay but then it is all over. Further up Johnston Strait there are some logging camps, such as Kelsey Bay but no regular houses. You have to wait until going through Blackney Pass or sailing by alert Bay, before there are fishing lodges and villages again. Then the next enclave of houses is on the North west point from Vancouver Island, east of Port Mc Neil. (This were the ferry from the Indian Village of Alert Bay goes to)

We stayed far from Alert Bay this time, as I needed the speed to get to Juneau on time. At 08.30 we disembarked our Canadian Pilots and then entered the queen charlotte sound. By tonight we will be in the North Pacific Ocean sailing for Kake pilot station where will embark the Alaskan Pilot tomorrow at 09.00 hrs. From there, pedal to the metal to Juneau for a 15.00 hrs arrival.