Today we were supposed to be in Rangiroa, a flat Atoll north of the main island chain of the Society Islands. So after a windy day in Moorea we set sail for this Rangiroa. The Weather forecast had given us a little bit of hope with indicating that the Northerly wind would veer to the East and drop to 10 knots, and the subsequent seas would diminish to a meter.  The seas would not be a problem, as the anchorage for Rangiroa is inside the reef and thus the swell would be stopped by the reef. The wind was going to be the challenge. Anything over 15 knots would be an issue, as the ship towering high above the reef (only having a max. height 15 feet), would catch all the wind. Thus we hoped that the weather forecast was going to be right. 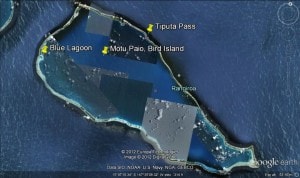 Rangiroa. The entrance for the ship is Tiputa Pass. (Courtesy of Google Earth)

It was not.  By 05.00 we sailed north of the Atoll and it blew a steady 30 knots. Then it breezed up to 40 knots in a rain shower and then came back to 30 knots of steady wind. Our resident pilot arrived on the bridge, looked out of the window and said: T’is ies H’orrible. I could only agree with him.

With such a wind you do not go inside, unless you want to open a permanent Hotel on the island. 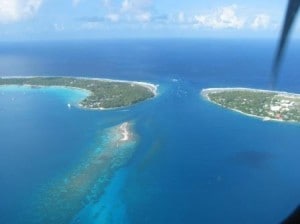 The hole on a nice day. But even now you can see the white caps in the entrance, where a gentle breeze pushes against the current.

To get through the anchorage we have to sail through a small opening with basically a North South course.  There is a strong current coming out through the hole, as all the water that flows into the Lagoon has to get out again and there are only two openings in the reef. Only one is deep enough for large ships and thus it also has the most current.

The third component of the challenge is that you have to sail in with 8 knots to counter this wind and current and as soon you are through you have to slow down sharply and within a mile distance make a 360o turn to the anchorage with a 1 mile radius. You cannot do that with 30 knots of wind pushing you all over the place. 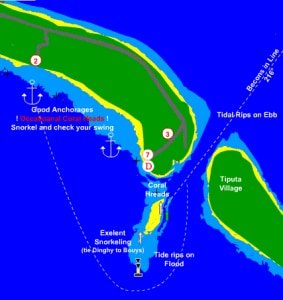 The approach as from a yachtie chart.  The yellow reef is about the length of the ship, so it gives you an idea about how tight the turn is below the buoy.

So we decided to start making circles and hope for improvement. The band of rain clouds was moving away, so there was hope.  While we circled off the entrance the pilot phoned around about the weather, consulted his colleagues about what the maximum margins were for an attempt to approach but all came back with what we had already decided: You cannot do this.  So when by 08.00 Statendam was wide awake, I could tell all on board the bad news; this was going to be a no no.

We had another look, but by 08.30 it was quite clear by the time the weather would improve, if at all, it would be too late to go in.  So I made a lee for the pilot boat (reducing the bouncing of that boat from 3 to 1 meter) and we said goodbye to the pilot who had been with us since Bora Bora. He had to go home to see his 3 month old Be-Be and then to his next job going with another cruise ship around the islands. I wished him better weather.

Our next stop will be Nuku Hiva in the French Marqueses Islands. They are under the influence of a totally different weather pattern, sustained by the South Equatorial current. The bay for that island is sheltered from all sides except the south. Also pilotage is not required for this call so I can do it myself.

The question is always of course can I offer something else. The problem with Rangiroa is, there is nothing else around. Together with a number of similar but un-inhabited- islands, the Atoll is really in the middle of nowhere. So I did the only thing I could do and that was to bring our arrival time forward.

Planning had decided long time ago that our arrival would be at 08.00 but nothing stopped me from starting a tender service at 06.00 as sunrise is around 05.00 and the weather is warm 24 hours a day.  On top of that we offered free flowing wine during dinner in the evening and that normally results in a lot smiling facing after dinner.

It does not take away all the disappointment but the first captain who can control the weather still has to be born.  This weather band stretches about 1,500 miles from East to West and has now created a tropical Cyclone –Evan- near Samoa. At least we are not the only ones who are affected.

We spent the rest of the day at sea and tomorrow will be a sea day as well. It means we can sail with a lower average speed and that is good as the Northerly swell is still considerable at the moment and it means we now have a quieter ride.