Sailing from Glacier Bay to Ketchikan, you leave the Inside passage for a little while when nearing an area called Cape Decision. That gives the strange feeling of a moving ship while you are supposed to sail in the sheltered Inside Passage. It only lasts for about an hour or so while we move from one part of the Inside Passage towards the next one. This time the Pacific Ocean was nice and quiet and there was hardly any movement at all. But it can be different, especially near the end of the season when the Alaska storms are starting to pick up. Then I have to warn the guests about the –sudden- wobbly period that occurs in the middle of the night. That gives me a strange but challenging situation. E.G. making announcements. Most ports in Alaska do not like announcements to be made, either in port or when approaching or leaving. They like our money; they do not like our announcements. So I have to be careful otherwise the ships agent gets inundated with telephone calls. That makes it challenging on this cruise as most ports we are leaving late and I cannot make noise either when the show is going on so I am very limited. Another reason to hope that the weather stays nice.

And that it did. Ketchikan promised sunshine and it came later in the day. Not before I had to pay the price for it with thick fog from 11 pm until 6 am. Basically the whole night and thick it was, less than 300 feet visibility. At times we could not see the ships funnel from the bridge. On our way to Ketchikan, we have to pass south of Zarembo Island, through a narrow passage called Snow Pass. Going around Zarembo Island will add an extra 22 miles to the journey and that means arriving late in Ketchikan.

So all the ships go through there and here the challenge is that you have to make a 90o turn with sometimes strong currents. A challenge even made bigger if there is traffic coming through which does not always adhere to the Rules of the Road or reacts to VHF calls for making passing arrangements. This morning there was no traffic, there was only 2 knots of current but there was thick fog. So we sailed through, navigating solely on the Radar and listening to any fog signals that might be out there. With an enclosed bridge, that is not so easy, but we have solved the problem by using a great invention, called a window. The only bad part is that all the cold air comes in and then you see the strange scene of all officers and quartermasters wearing thick coats while peering through the fog. It almost felt like going back to the old North Atlantic days, when the ships were made of wood and the men were made of steel. Now the ships are made of steel and the men spend their days reading emails………..times have changed. 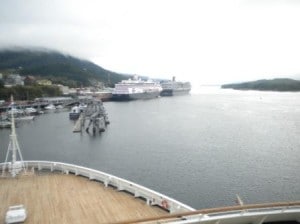 By 06.00 the fog lifted and everybody could see a nice arrival of Ketchikan. And it looked nice. A whole row of white and blue ships lined up. The Oosterdam on berth 1, the Zaandam docking at berth 2 and us on approach to go to berth 4. Berth 3 remained empty until 14.00 hrs when the Celebrity Century arrived. It was a pity that we could not be at 3, otherwise we would have had all the three ships in a row. Would have made for a nice photo. But the Century does not fit at berth 4 with her gangway, so we could not swap.

Ketchikan is the head quarters of our ships agents, that we use all over Alaska. Cruise Lines Agencies of Alaska. They also have a cargo branch called South East Stevedoring. Although they do not belong to Holland America, their service is so good and dedicated that it is almost as if we are one company. They have been our agents since Westours was first on the scene in the 1960s. So I always make it a point to go to the office to say hello at the start of the season. Most of the seniors have been there as long as I have. Our ETA and Dispatch Lady Judee started in the same year as I did in 1982.

When in 1997 the old Rotterdam left Alaska for the last time, we left behind part of the Radarmast (now back in Rotterdam at the ship) and the Globe that had always graced the ships library. The old Rotterdam was really the ship that opened up Alaska to the tourism boom that we know now and the then time manager Chris Geldaker asked if his office could have a tangible memory of that great ship. So we landed the Globe, as the Rotterdam was the world cruise ship, that had gone “around the globe“nearly every year in her long career.

We left at 18.00 hrs and said goodbye to our Lady Pilots at 19.30. Tomorrow we will sail through Queen Charlotte Sound and then re enter the Canadian Inside passage in the late afternoon.