Over the past weekend the Holland America Blog was successfully revamped and transferred to a new server.  Apologies for the delay of what was supposed to be only a few days of disruption. But if a P.C can sometimes have challenges on a small scale, a web setup can have bigger ones on a more industrial scale I suppose.

I stopped blogging at the end of my Zuiderdam period and because of the transfer I could not do anything during my period on the Westerdam.  Most of that period consisted of a crossing from Ft. Lauderdale to Europe and then a number of Mediterranean ports before the cruise ended in Civittavecchia. I then went home and the Westerdam went into dry dock for a regular check up but also for a major revamp of the public rooms and the addition of some guest cabins on deck 10. As a result the ship is now similar to the Oosterdam which was the one but last of the Vista Class to go through the upgrade dry dock. The Westerdam is now the last one of the Vista Class that received the regular upgrades but also the best of the Koningsdam upgrades that were also rolled out earlier on the Oosterdam and Eurodam. This includes the Gallery Bar (ex Northern Lights Disco), the Billboard on Board (located on the starboard side by taking part of the Casino away) and a new feature, a small museum with Dutch Art sponsored by the Rijksmuseum from Amsterdam.    It is located opposite the Front Office on Main deck where once the Shorex office was. The shore excursion office has been moved to the Crows nest as part of the companies re-focussing on the combination of enjoyable cruising and cultural immersion at the same time. 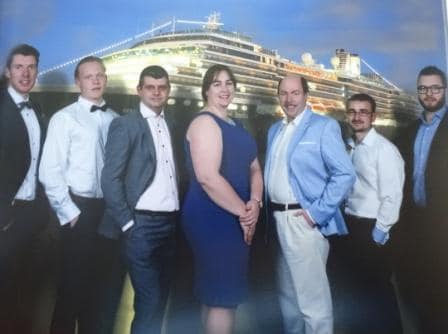 The latest group of navigators to join Holland America Line

My activities on the crossing consisted of training a new group of Navigators who had joined Holland America in the previous weeks.  5 gentlemen (Dutch & Rumanian) and one Lady from Canada. The latter had sailed on the Canadian Coastal vessels and made about 20 cruises with her family on Holland America Line ships. Now she learned the other side of cruising and soon found out that there is a lot of hard work going on behind the glamour. By the time they made it to Civitavecchia , they were all well aware of what it takes to be a Holland America Line Officer  and can now walk onto their first ship with enough confidence to fit right into the bridge teams.

Thus I went home on April 13 as the presence of an extra captain during a dry dock only confuses the issue. I am now enjoying a month of vacation and then it is time for the ships sailing from Canada. I will update my schedule-tab as well but this is the plan for the near future………….. as usual subject to very much change.

18 May – 03 June ms Maasdam, Canadian Maritimes. Boston to Montreal and back.

After that I will have another break in the schedule.

In the mean time I am keeping myself constructively occupied by supervising our phase 3 roof maintenance of the apartment building which I live in.

I will be back with the blog on the 18th of May.