And thus real life began again. Yours truly arrived last night in the Big Apple and joined the ship today. This time I stayed in a hotel in Jamaica which is part of Queens and thus had an 80 minute taxi trip to make to get to the ship. On normal days that takes about 25 minutes but Queens has a bottle neck where all the roads are coming together to go over the bridge into Manhattan. And today it was a bottle with a very loooooooooong neck. Not that I minded this as I had never travelled the whole length of Queens Boulevard and as New York is a true melting port, there is always lots to see. Plus I can now remove one item from my bucket list and that was travelling over the Queensborough Bridge (Also known as Ed Koch Queensboro Bridge). My experience was thus far limited to the Brooklyn Bridge but my New York Bridge’s experience has now increased by 100%. Next to this bridge are cast iron pillars located for a cable car crossing but I did not see any cable cars so I have the impression that it is not operational. 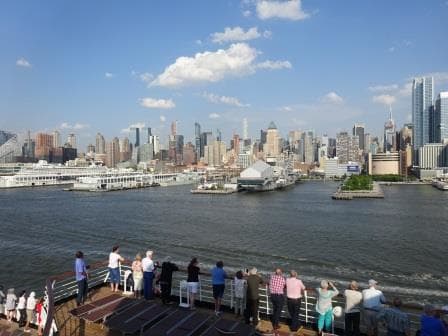 New York Cruise Terminal just after departure. to the left the Crystal Symphony is just visible.

The good ship ms Maasdam was docked in port together with the Crystal Symphony. This ship was on a port call only stop but the Maasdam also had a partial embarkation today with guests coming on board for the Canadian Maritime cruise. They hopped on board in New York instead of having to travel to Boston. In the Boston we will have a change over again with guests finishing their Trans Canal cruise. The Maasdam is coming from the west coast where it also made a South Pacific cruise. Now it will start a series of cruises to Montreal from Boston and back. 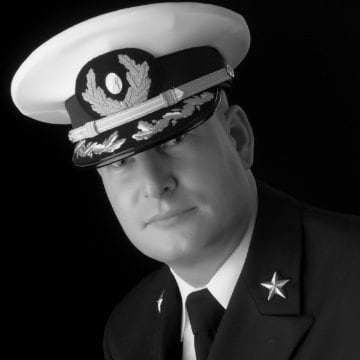 The Master of the vessel is Capt. Bas van Dreumel who until recently was on the ms Nieuw Amsterdam. But he has the same take on the job as I have, you have to rotate ships to stay fresh and so he opted for the change of going from the one but newest ship to the oldest one (excluding the Prinsendam) and also a much smaller ship. But smaller ships have a charm of their own and the Maasdam is making some very nice cruise and varied cruises.

I will be on the Maasdam for three weeks, until June 10 and then transfer to the Noordam. (Subject to very much change as usual) During that period I will conduct a number of trainings, run a complete certification course of Lifeboat attendants and carry out some internal audit work for the Captain. In the coming days I will explain what a Lifeboat attendant course is but it involves messing around with boats big time, so I am keeping my fingers crossed for nice weather.

Today started well, the weather was almost too nice. 97oF with only later in the day a bit of S/E wind picking up. If that continues then I will be a happy camper, but my colleagues on the bridge will not.  Sunshine means very low clouds when in open sea and the whole area from New York to Boston to the St. Lawrence River is prone to a lot of fog if the weather is nice. The combination of warmer Gulf Stream water to the South, cold water to the North and warm air above land can create dense fog, very dense fog.  For the guests normally not much of a problem, unless you bought a cabin right under the whistle, as it normally are burns off in port…………. And then it comes back as soon as the ship returns to open water. 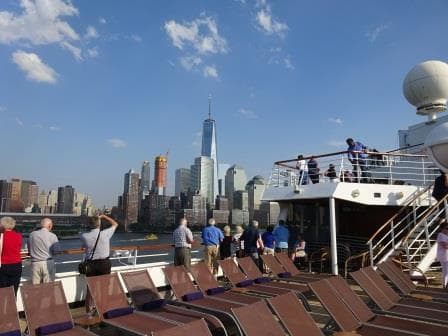 Today we sailed at 17.00 hrs. from the New York cruise terminal. That departure time being important as it is slack water at this time. I always call that “theoretical” slack water, as the time of real slack water seldom is the same as the real moment. But you try to arrive and leave as much as possible on the slack tide when the current is zero or almost zero as otherwise it is a lot more difficult to avoid bumping into the piers located on both sides of the ship.  Today we sailed at slack tide but even then the ship had drifted considerably by the time it was in the middle of the Hudson River where it could swing to the south and head for open sea.

Tomorrow we have a sea day and the weather looks good and if it warms up quick enough, then we should have good visibility and see some wild life. There are normally lots of whales in this area.

Note: the blog still has some challenges so the coming posts will be without photos until this has been corrected.