And thus real life started again and I returned to sea by means of the ms Prinsendam. I was supposed to join the Koningsdam first, but the Prinsendam will be celebrating her 30th. birthday on June 11 and I was asked by the ship to do a few lectures in relation to HAL and our Elegant Explorer. Thus we juggled the schedule around and here we are combining work and hobby-pleasure.  Before we dive back in the real world; a small side step with something that happened while I was at home. Also in relation to the history of the company and in relation to the original reason we have a Veendam sailing in the fleet. 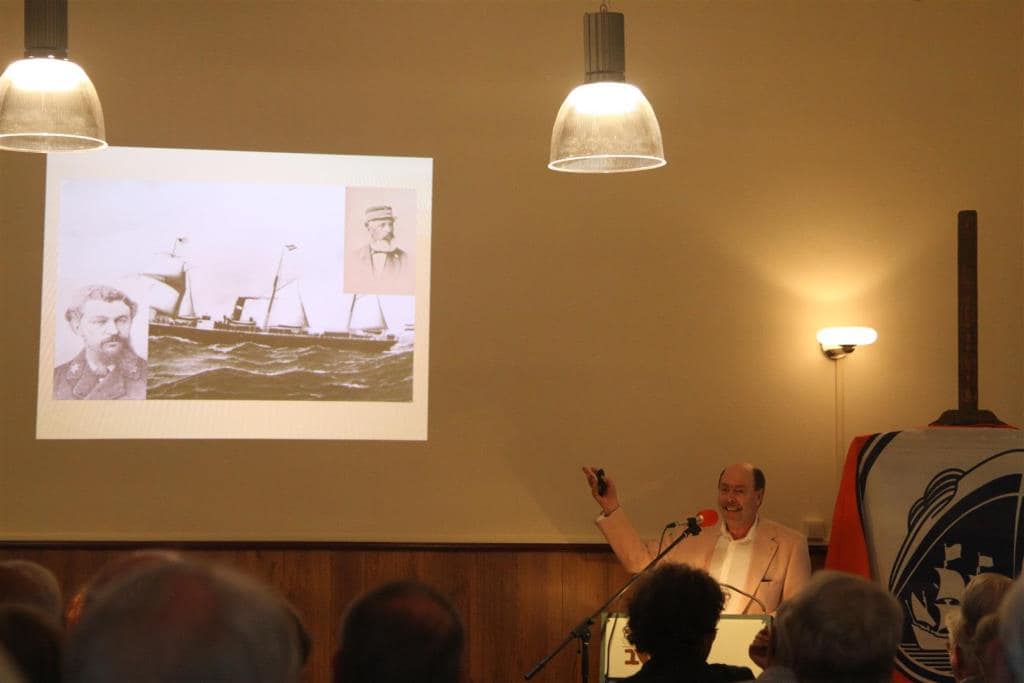 Back in the grey mists of time, 145 years ago, Holland America was founded and went public with having a listing on the Dutch Stock Exchange. Out of nowhere a rich industrialist from the Northern part of the Netherlands popped up and bought so many shares that the company was able to finance a complete ship from it. Thus the company named this ship after him. Mr. W.A Scholten was inspired to invest in HAL because he only saw German shipping posters at the various railway stations he used while traveling between his various factories in the Netherlands and as far as Poland. The ss W.A Scholten sank in 1887 but the company replaced it very quickly. By that time the DAM naming system had come in vogue and thus they could not repeat the personal name.  But no problems here, Mr. Scholten had factories nearby and lived in the town of Groningen and Veendam was the nearest “DAM” town in area. And thus in 1888 the ss Veendam (I) started sailing for the company.  And for most of our history we have had a Veendam in the fleet. The current Veendam being nbr IV. 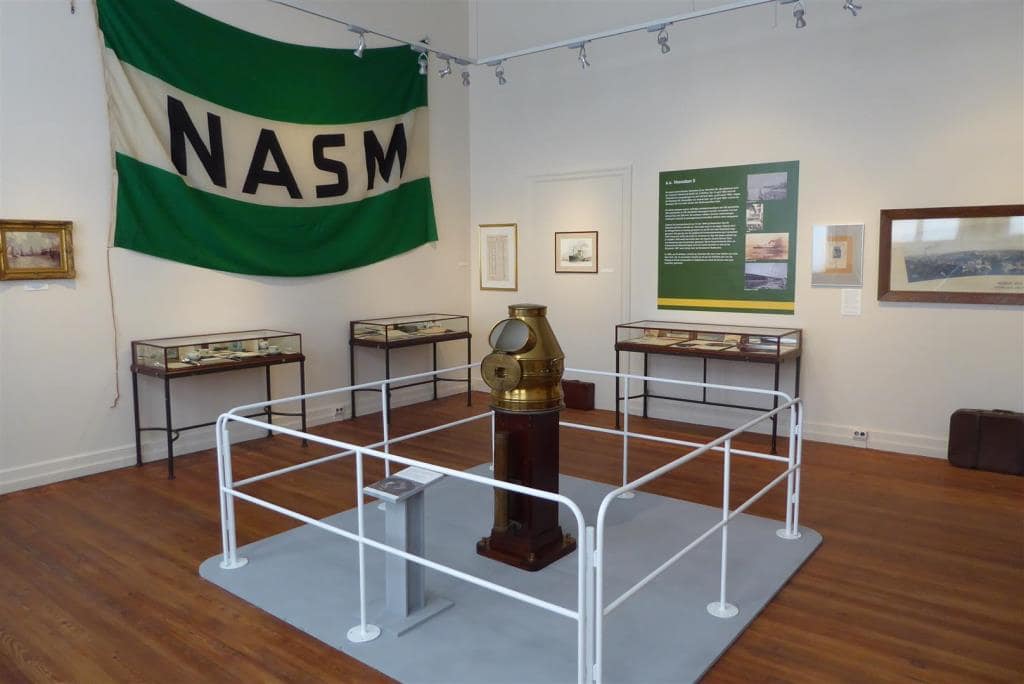 There are big collectors and there are small collectors. I am a small collector but the museum found a gentleman who had managed to salvage the magnetic compass of the Veendam II when it was scrapped in New York. He is a big collector as this compass was only a very small part of his private collection. (Photo courtesy Mr. Ruud van Deventer, son of ex HAL Captain Van Deventer)

In this home town, Veendam in the province of Groningen, there is a museum which is dedicated to the rich shipping history the town once had and also its relation with W.A Scholten. And thus with Holland America being 145 years young and W.A Scholten and the four Veendam’s  it was decided to create an exhibition about it all. But then you need material to exhibit. In this case this museum asked the collectors and historians in the country if they could help.  And of course they were willing. Every collector likes it when his/her things go on display and most collectors are much easier to work with than the red tape of official museums.  And that brought the organizers to me and recognized a sort of unique situation: A Holland America Line historian and collector who also had been the Captain of a Veendam.  Some of my collection went on display (and that was not much compared to what some others were able to bring in) and I was quite happy. 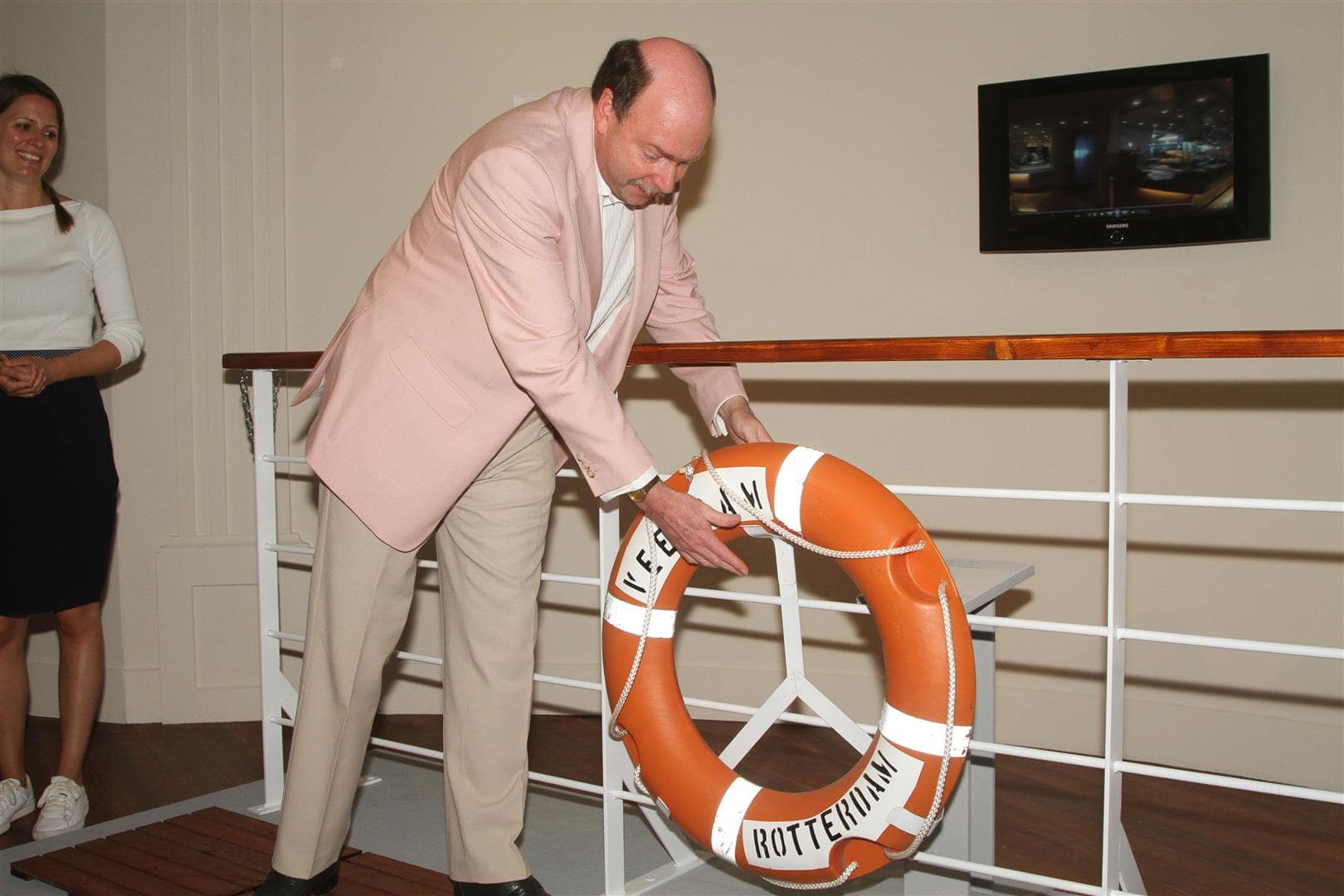 Normally when a sailor has a life buoy in his/her hand it is because somebody has fallen overboard. It is quite unusual to use a lifebuoy to open an exhibition. (Photo courtesy Mr. Ruud van Deventer, son of ex HAL Captain Van Deventer)

Then there was the un-expected next step. As the Dutch King, nor Queen, nor the Prime Minister or any other highbrow official was available (the opening being on a Sunday afternoon…………….), it was decided that I should do the opening. A cruise ship captain’s life is never dull but I do not think that this happens very often. So in the last week of my leave I drove to the far north of the Netherlands, to Veendam to open the exhibition. No ribbon cutting with golden scissors but sailor style with hanging a lifebuoy on a fake railing.  For those who read this and have the option to visit, it is well worth to do so, not only because of this exhibition but also for the rest of the museum and for Veendam which is a delightful little town to spend an afternoon in.  (https://www.veenkoloniaalmuseum.nl/nl/in-het-museum/tentoonstellingen/veendam-in-de-vaart-1)

The ms Prinsendam started today a 14 day round trip to the Baltic and will also call at Turku, where 30 years ago the Royal Viking Sun, now Prinsendam was built. Apart from Hamburg and the Kieler Kanal it is doing a regular Baltic cruise with calls at Tallin, St.Petersburg and Helsinki. The ms Prinsendam is the only HAL ship which fits in the locks of the Kieler Kanal and we have guests on board who have booked this cruise especially for that purpose. I am keeping my fingers crossed that we will have good visibility. Today on departure it was hazy and a white curtain came down the moment we left the locks at Ijmuiden. But tomorrow we are supposed to get a bit of wind and that should change the balance between air and sea temperature somewhat and hopefully that will result in being able to see the whole world again.