It is always a bit confusing with this place as the fjord and the town (or hamlet) have the same name. Everybody is talking about going to Geiranger Fjord but we are not really doing that, we only sailing through it and then park ourselves off the town of Geiranger. We can also call it the port of Geiranger as it has a dock for the small local ferries, excellent tender facilities and 3 anchorages for the cruise ships. And then there is space for those ships that have to, or like to, stay on the engines and drift. As I had hoped for, the rain that was predicted must have fallen at the other side of the mountain so we had a dry day. The mountains here are at least useful for something. They cut off internet connection all day but they are nice to look at and they keep the rain away.

The ms Koningsdam at her anchorage. We are close to the shore but it looks closer than it is. The brown triangle is the safety zone of the ship. If the ship moves out of it an alarm goes off as the safety margin is then breached,

The cliffs of the mountain ranges come directly up from very deep and that makes is possible to anchor very close to the shore side; it also makes it very difficult to anchor as the water is very deep, very dark in color and you cannot see if the anchor is doing its job or not. On windless days that is not so important as the weight from the chain on the sea bed will keep the ship in place but on windy days it would nice if we would be 100% sure if the anchor had dug itself in and was preventing the anchor chain from slipping (dragging we call this) from its supposed location. But today was a windless day and thus one anchor down with a lot of chain and four mooring lines to a bollard ashore was enough. If it had been windy then the ship would have stayed in the middle of Geiranger fjord and would have just drifted on the engines.

The stern of the ship is kept in position with mooring ropes. As you can see we are not THAT close to the rocks.

As mentioned yesterday with us in port was the Zenith, who was on a shorter stay call and was thus docked on the mooring buoys at the very end of Geiranger fjord. If you have that berth then you also have the option to use the Sea Walk which is a floating pontoon that zig/zags out to the ship and then provides a nice walkway to the shore. In that way at least one ship does not have to use the anchorage and run a tender service. 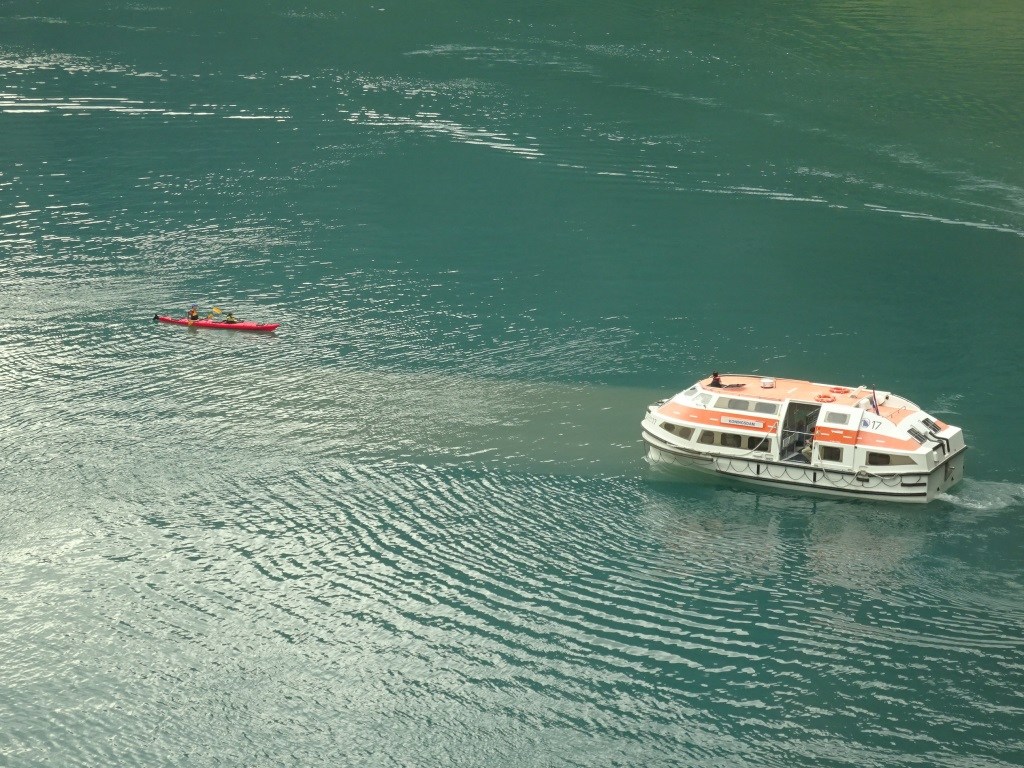 Our tenders are not that big but still dangerous to anything smaller. My question is why do they have to be exactly there? There is 200 miles of fjord around them and they have to drift 100 feet from the ship?  The tender driver is standing in his cockpit now, half outside to makes sure he sees everything.

Our tender drivers who freshly obtained their new certificates, had their work cut out today. Normally their challenge is wind, swell and current, today it was traffic. Although it is here the very end of the fjord, there is a lot of traffic. The local ferry is in and out, we had the Midnatsol from the Hurtigruten mail service come in and go out, local speedboats and what we hate the most, kayakers. It is wonderful to kayak in Geirangerfjord as you really feel one with Mother Nature but with larger ships around it can be dangerous. And I sometimes doubt if the companies who rent out these kayaks, warn and train the peddlers to stay clear of all the other traffic.  Because kayakers do not pay attention to anything. And even our small tenders have dead angles and could create a dangerous situation. We train our drivers and helpers to be on the look- out at all times as we do not know what the kayakers will do.  Our rule for avoiding issues here is quite simple:   slow down, stop and wait until you are completely sure of what that other craft is going to do. And today we saw that Golden Rule applied quite few times by the Tender drivers.  Stop, Watch and then very slowly go one direction and hope that the kayaker either sits still or goes the other way. If not, then we repeat the process and try going the other way.

Our route out of Geiranger Fjord. Long evening again for the captain on the bridge.

By 18.00 hrs. we will start sailing out of the fjord again and sail for Bergen. We will disembark our pilots at the pilot station just outside Alesund and then sail south to the pilot station of Bergen. From there it is only 2 hours to the dock instead of a whole long night as is the case with Geiranger Fjord.

Tomorrow we dock, that is the good news, tomorrow it might rain, that is the not so good news. We can only but hope that the rain is delayed as Bergen has mountains on three sides but the rain comes in where there is not mountain range.