Bergen is part of Norway but somehow apart. People here say, there is Norway and then there is Bergen. They like to do things independently here and that means that routines are not always the same as in the rest of Norway. That also applies to the weather. One is not always certain what the weather is going to be like here as it really depends on the way the wind is blowing, or the lack of it. It worked out in our favor today; it did not rain. There was no wind at all so the moisture laden clouds that floated by above us did not hit the surrounding mountains hard enough that they started releasing all the water inside and so we had a very good day. It had rained before and during our arrival and then it nicely stopped. 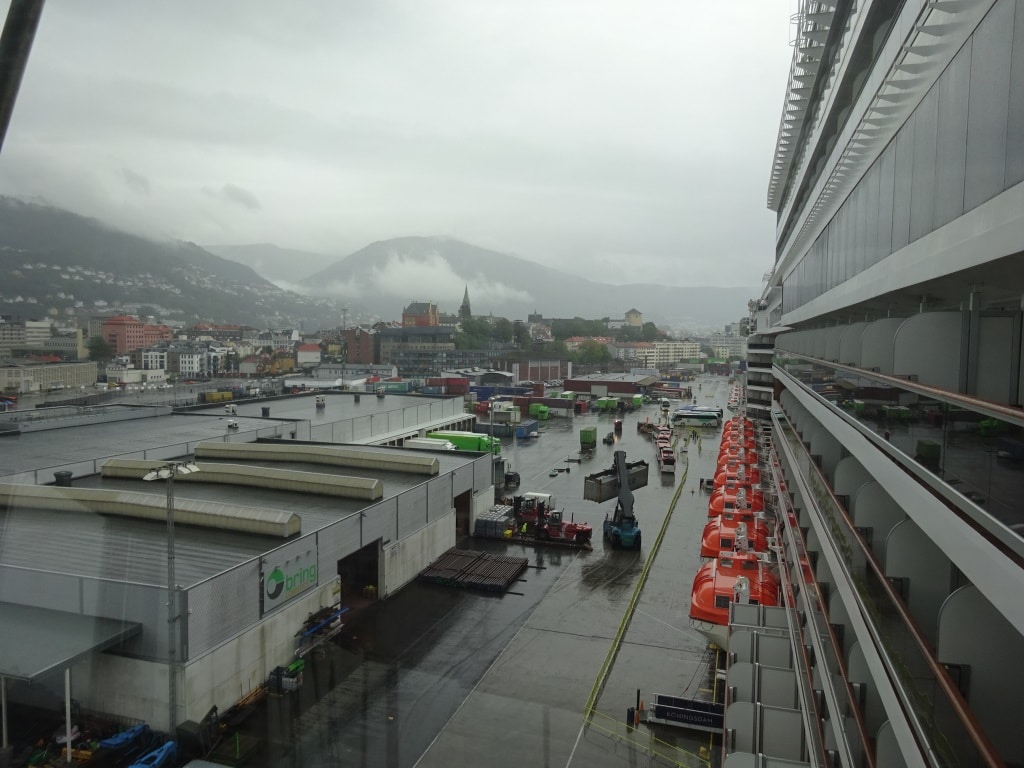 There is a funicular going to the top of that misty mountain but the clouds do not always stay out of the way.

We were not the only ones who were lucky today as it was a busy day with cruise ships. In port today Koningsdam, Ventura, MSC Magnifica and the Nordkapp (Hurtigruten), not to count the regular ferries, cargo ships and off shore vessels as Bergen is a big port. Together with Stavanger it is a major home port for the North Sea oil and gas industry and just outside Bergen is a large Gas complex which feeds a gas pipe line to the United Kingdom. So I better say nothing negative about Bergen as otherwise the gas to my apartment might be cut off.

The downtown port has not much expanded through the years as most ships visiting there are not that big and still fit in the downtown harbor. Large ships, cruise ships are only here in the summer and then things change. They can still handle one biggy in the downtown area but others have to go to the cargo port which is not far away but gives an extra hurdle to take as you are not allowed to walk on the dock. The port lays on an elaborate shuttle service to avoid accidents in the port area and we had to use buses today. Right under our starboard bridge wing was a ferry dock and behind us a container dock and you do not want pedestrians milling around when those ships are discharging and loading. 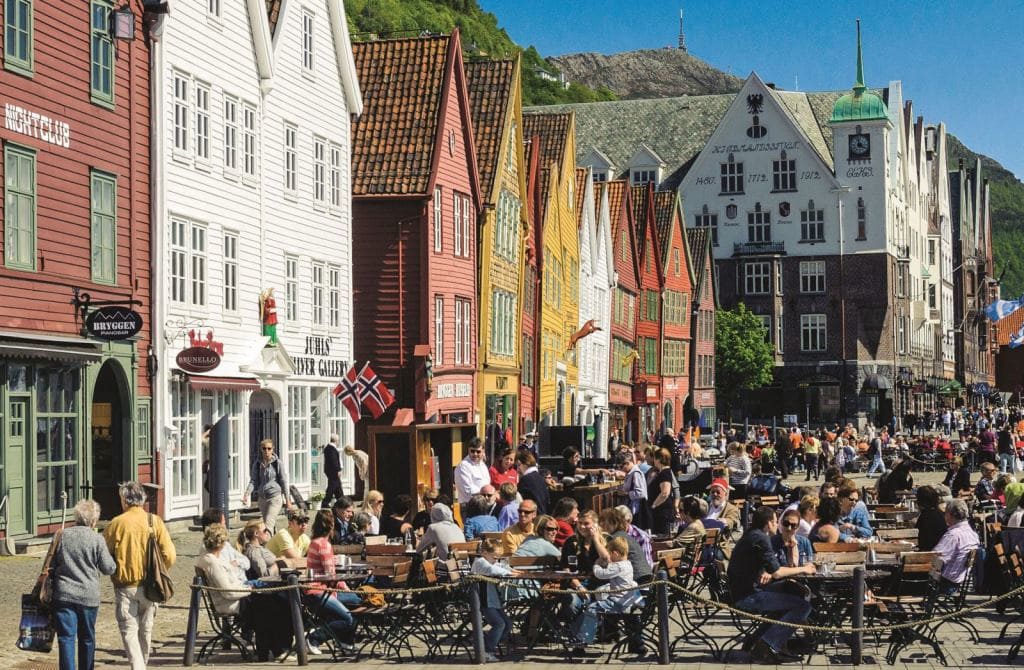 Bergen is a World Unesco port and the down town area considered important as an outstanding cultural inheritance site. This photo is courtesy of Bergen Travel and they must have waited for a sunny day to take it.

Bergen is our final port call of this cruise and planned so the guests have the option of a company tour, or take off by themselves for shopping and sightseeing. For those nautically inclined it has a very nice Maritime Museum with a lot of Viking Era items. Then the old port is made up of wooden buildings from the days of the Hanseatic Treaty in Europe (a sort of European Common market but then between cities) and the wooden houses and warehouses have survived quite nicely. Some of them are still in use for trading purposes but a lot have been taken over as tourist shops. Then further down is the regular main street with department stores, restaurants, bars and supermarkets. A glass of beer here is ultra-expensive and the deck officers had figured out that for less money they could take their girlfriends on the funicular up the mountain for a good look over Bergen with the mountains in the background all covered in rain clouds. 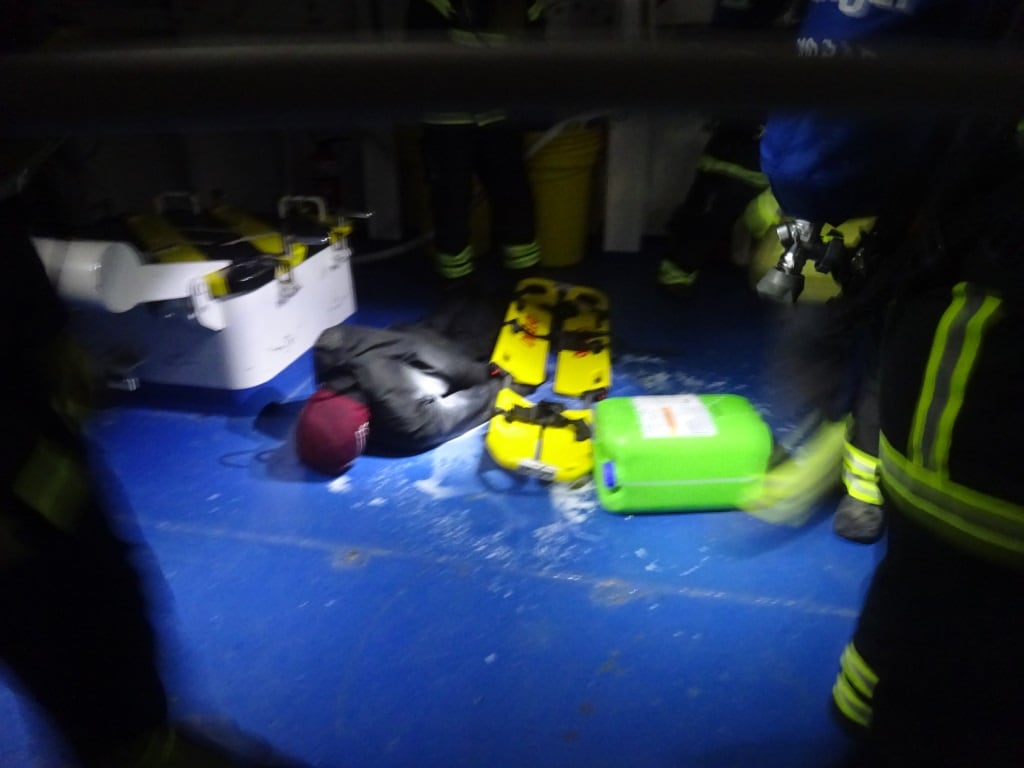 The ships dummy was a willing casualty laying in a chemical spill. He is about to be transferred to a stretcher. I use milk for this as it shows up very well in the dark.

The crew did not have much time to go ashore as it was time for General drill. (Fire drill, followed by General Assembly, followed by disembarkation in lifeboats and life rafts) I ran one of my specials to challenge the teams and had come up with a fire in the Bo ‘sun store combined with a chemical spill. This means that the teams have to combine their trained routines for the various evolution’s into one plan to achieve their objectives. Extinguish the fire, contain the spill and save the casualties. 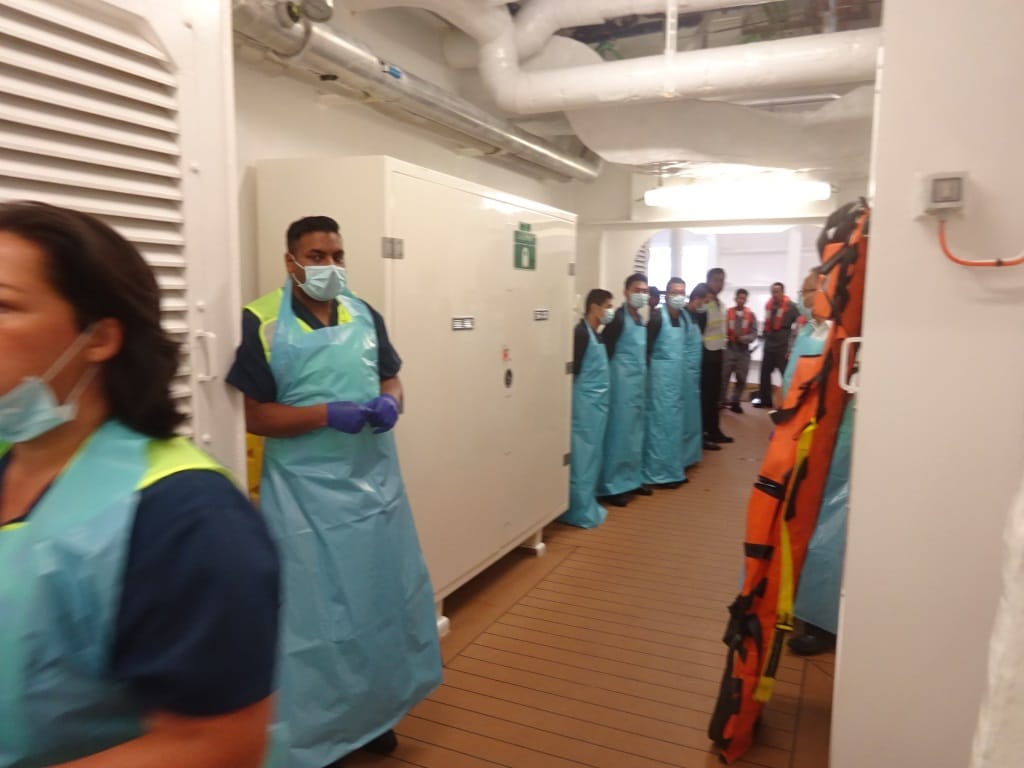 The medical team and helpers ready to receive the casualty covered in chemicals but also to deal with de-contaminating the fire teams coming out.

During the General Drill the focus is on achieving a 100% count of all guests and crew. During a regular passenger embarkation drill that is not so difficult to achieve. But our experience is that in a real emergency there are always a few guests who go in denial or get nervous or freak out. Still we want to save them so we also train for this. And for that we have a whole large team lined up who tracks all the search and evacuation teams on board and then coordinates what is needed to get EVERYBODY safely off the ship. The captain is the last one leaving so I suppose from him it is optional if he wants to go as there is nobody to push him into a life raft and off the ship. 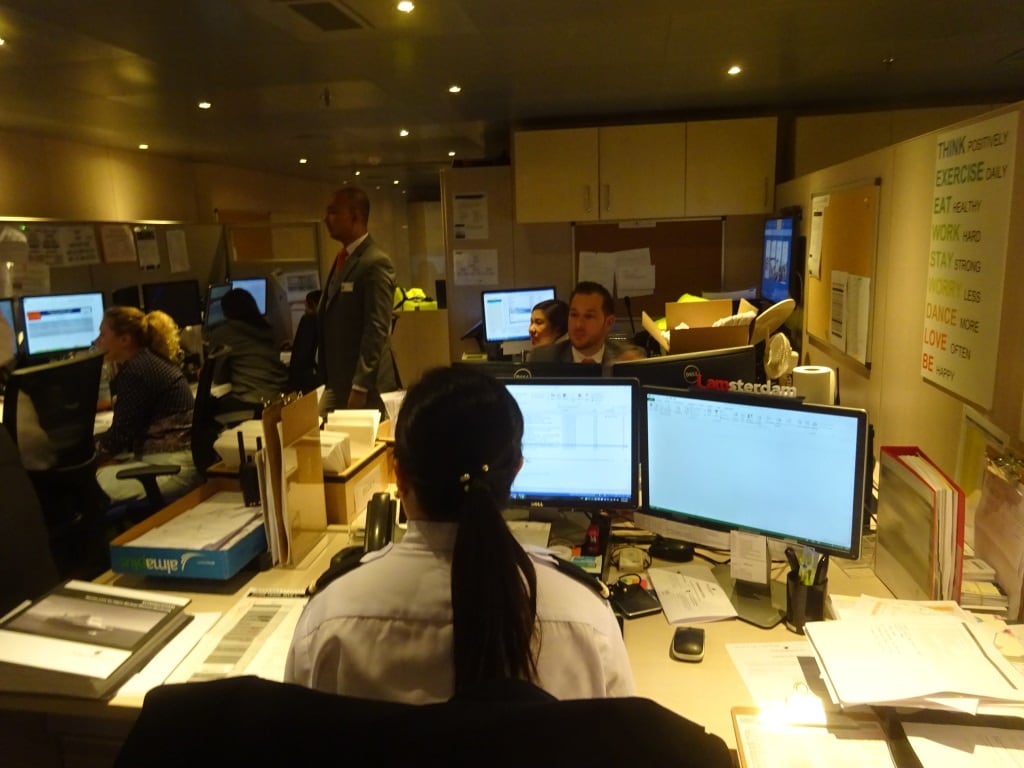 The Muster Control Support Team in action, coordinating the movement of 2500+ guests and 900+ crew.

Tomorrow we are at sea, going back to Amsterdam the summer home port of the Koningsdam. Weather should be good, 24oC / 76oF and a gentle breeze. That will be my last day on the Koningsdam which I will close off with a Holland America Line History lecture for the guests, followed by the handing out of certificates to the sailors and followed by the all-important exercise of packing my suitcase