Stromboli was not very active and the guests did not miss much. I also do not think that many guests were up and about as it was just off midnight and we had one hour forward to get onto “Greek time”. The next item of interest was Messina Straits which happened shortly after 05.00 hrs. in the morning. So it was a short night for the captain, from after departure, with an hour forward, and being up and about by 04.00 hrs. for the Messina approach.

Due to the tight schedule for reaching Santorini, the passage had to be early in the morning and it was thus only for the real brave that the scenery unfolded. When we were racing through, the sun just started to lighten up the Sicilian side of the Strait and it showed a clear sky day again. By 08.00 hrs. it was already warm on deck as we had following winds and that made it nearly wind still on the ship. 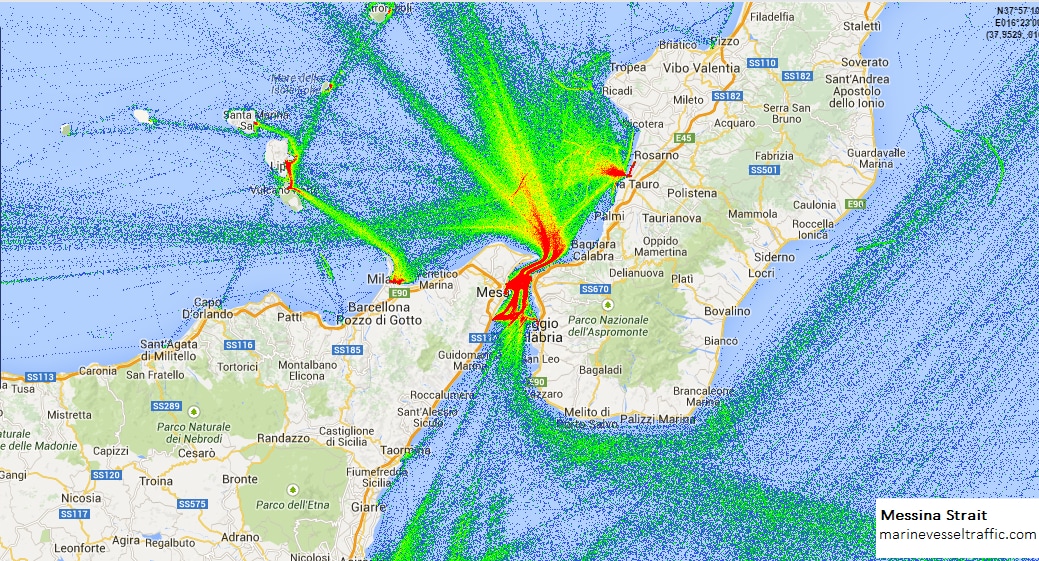 This picture show the amount of traffic as observed over an certain time period. You can clearly see the trade routes which all use Messina Straits to get from A to B. We nowadays have these overviews as each ship has a AIS transponder which everybody can track.  (Thank you Marinevesseltraffic.com)

Messina Straits is a fairly narrow passage between the island of Sicily and the Italian mainland which is called Calabria in this area. All the shipping which comes from the region of the North Mediterranean from the south of France, curving over to all the North Italian ports, use this Strait to get to the rest of the Mediterranean or to the Suez Canal. (And back of course). Because it is fairly narrow, a Vessel Traffic Scheme has been introduced to keep the two flows apart. But due to the extensive ferry traffic to and from the island of Sicily this was not enough and pilotage has been compulsory for a long long time. On top of that it can be full of fishing boats which are all coming out at sunrise and then fish while floating with the tide. Thus with a south going tide we know that they are south of Messina and with a north going tide they are floating towards the north of Messina. But wherever they are, they tend to be in the way. That is part of the fun when going through. Although the Mediterranean is an inland sea, it is not completely tide less and there is always a difference in the amount of water North of the Sicily and to the South and that creates a considerable flow through the passage. 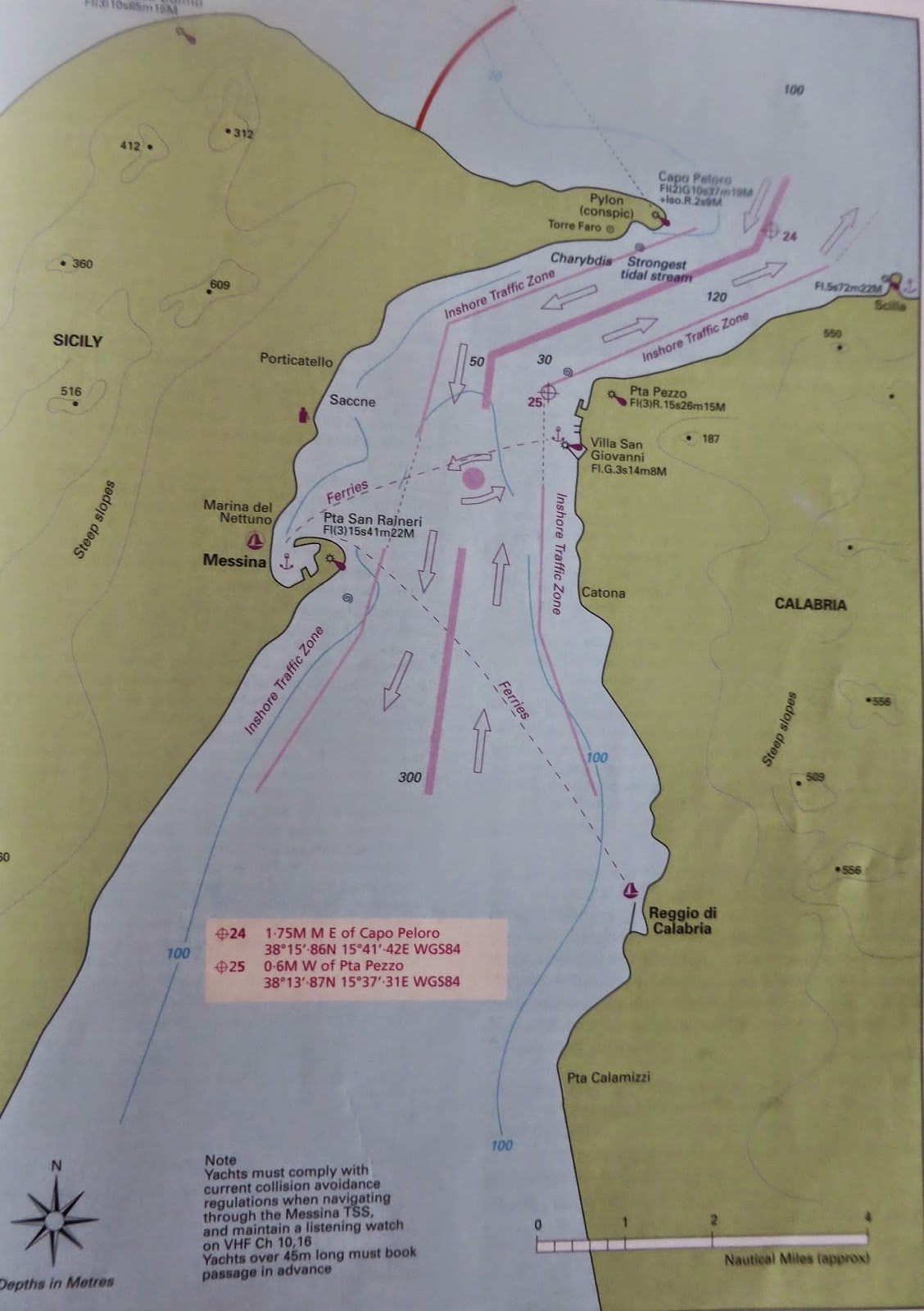 Because the pilotage is such a short distance and because there are so many ships to serve, the Messina Pilots are always in a hurry. Where in the rest of the world, pilot boats want you to slow down to 5 or 6 knots and create a lot of fuss of making a good lee; here they come racing alongside while the ship is going at a speed of anything between 14 and 18 knots. I always found that it was in a way easier for a pilot boat to come alongside with a high speed than with a slow speed. With high speed, the ship creates its own wind that flows along the hull and the ships bow wave creates quite a nice flat area behind it for the pilot boat to sit in. It is very, very seldom that a ship has to make a lee for the Messina pilot to come on board. The speed of the ship normally takes care of it. 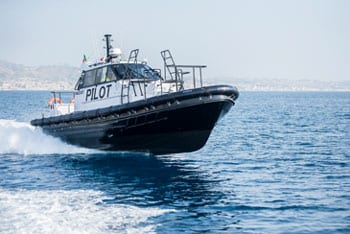 One of the newer pilot boats at Messina. As you can see, it is going full speed and that is also the way they come alongside the ship for the pilot transfer. Quite un-nerving if you are not used to it. (Unknown photographer on the internet, but thank you)

Then the pilot runs to the bridge, asks for the course and gets going. His main job is to figure out what the ferries are doing. When they are leaving and when they make their crossing. But as the captains of the ferries all belong to the same brotherhood it all works out fine. Normally a pilot goes through a whole Master / Pilot information exchange about what sort of maneuvering capacity the ship has, how fast or how slow it can go, etc.etc.

Everything a navigator needs to know to be comfortable before he or she can handle the ship. Nothing of that here in Messina.

It is Full-Ahead maneuvering speed and there we go. The secret of only needing minimal information lays in the speed. Even the most cumbersome tanker or bulk carrier steers quite well when it is doing 12 or 14 knots. So the pilot can change course and that is all HE needs.

(I have not come across a female Messina pilot yet)  30 minutes later and he is off the ship again, having been yelling for the last 5 minutes to an approaching ship about when he was going to be there.

The remainder of the day we sailed eastwards towards Santorini in nicely open waters and where we will arrive around 08.00 tomorrow morning. Approach will start a lot earlier as the ship has to sail into the Volcano crater, what Santorini basically is. It will be an early one for me as I am going to teach the cadets how to drop the anchor at the right time, the right place and in the right way. The ones we have on board at the moment are on their final days of their cadet year and in the near future they will come back as 3rd officers. ……………. And then they have to do it by themselves. So a bit of pre-input from somebody with 39 years of experience at sea, might not be a bad idea.

Weather for Santorini:  Sunny 28oC / 82oF and a moderate breeze over open waters. It is going to be warm, but the guests should be happy as we are (supposedly) the only ship in port.